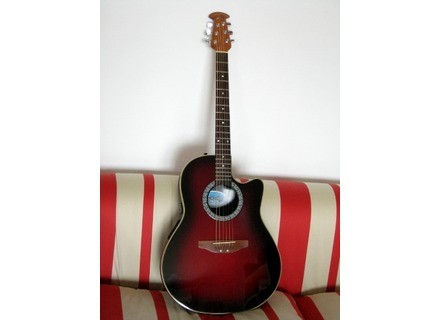 Ovation Balladeer 4771
4
This model is quite rare. It was produced a year or two to offer a version of the Balladeer cheaper than the standard appear before the Special Balladeer. To reduce costs, the connection is made in Korea, the net along the handle has gone and you can have it anywhere in any color as long as it is the sunburst. For the rest, we are in the same configuration as the Balladeer 1771 of the time:
- Crate Lyrachord midbowl Cutaway
- Solid spruce
- Mahogany Two-part V
- Fingerboard and bridge (crossing) rosewood
- Pre-amplifier OP-24 + (volume, 3 band equalizer, off the EQ, pre-shape, mid-shift)
- Mechanical oil bath

I love the handle type highway, turn indestructible and this unique sound both acoustic qu&#39;amplifiée. It is just sometimes too powerful for me in sound but it made me want to work harder game to pick more rhythmic and worked while I am more oriented game to fingers.