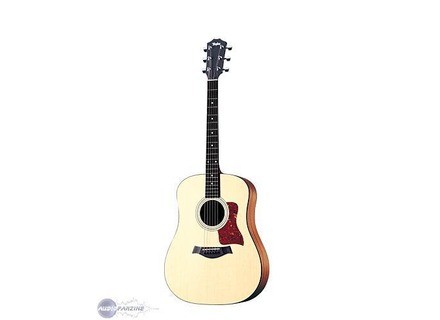 The handle has a profile in D, V or almost it seems. Comfort and ease of playing good but not fantastic. At the same time I have ever been at home on an acoustic, and all my tests in stores, it is revealed that the easiest to play.

Well this is where I wanted to make my little stone
Moving quickly on the side "electro" in recent years Fishman sensors are not mounted on these guitars is something else, less well, but correct nonetheless. Plugged directly into a mixing desk, nothing fantastic, it's not pretty, but it's not ugly either, it's the job.
Listed acoustic sounds, I think this guitar has a good character. Already, in form and design, it's safe and it can give a lot of volume when you attack a bit.
Frequency side, this guitar stood out from what I tried: it was a good sound with dense mediums. We used to hear acoustic guitars with a very sharp lens, the kind of thing that is almost invisible to accompany the rest of the instrumentals on a pop record. No, ladies and gentlemen here, there is the presence in the mids, your little E string will not be a poor "pic pic" but a good "ding", and one wonders sometimes if you are not playing on a piano. (No, it's still really far).
Also note that it is more pick fingers. It is as if the dynamic out above a certain threshold, which requires a quite tiring on the fingers. So pick that's easy.

I tried several other brands that I remember. This is the only one that stood out from other sound level, and it was stack the sound I wanted.

dubsoniq's review (This content has been automatically translated from French)

The neck is super nice, thin, flat, outstanding comfort.
Dreadnought shape does not necessarily easy access to the treble.
The guitar itself is very light, it is well on the body and does not tire.
The body has a reduced thickness, offset by the rounded back which does not have dams and provides more dynamic - the comfort is improved.
As against the original action is too high and rather intended to use the 110 rhythm.

The sound is complex and balanced, low current, a little hard, crystalline highs and singing, rather mediums round but slightly indented. Its a pretty folk-rock.

After several months of use, adjustment of the neck (low action) and a change of strings (Elixir Nanoweb Medium 13-56), the sound seems sharper than the purchase. Always a good definition bass and crystalline highs but the mids are better defined.

I replaced the original plastic pegs with ebony pegs: the sound has gained resonance and sustain, it is much warmer.

Overall, the sound has personality and presence, we can really do something, but more depth would be welcome: we see here that we are dealing with an against-plated and not a massive .

Contrary to what I read here and there, I find the piezo pretty good. Still need to know set the preamp Fishman Stereo Blender, which offers the possibility to mix the sound of the piezo (clear and dry) with the sound of a condenser microphone placed inside of the body (a lot of resonance and heat ). I come from the power so I kind of got a powerful and slamming.

After a year I switched to the sound from microphone static password so I completely piezo sensor (if it is taken to double the solo and add a kind of chorus), the result is more acoustic and natural.

I like the sound balanced and powerful without being showy crystal.
For € 890, there is a guitar made in United States with noble woods.
Well, back and sides are mahogany laminate and solid but not for the price ...
For 10 to € 15 more, a good trick is to put ebony pegs instead of plastic anchors of origin, the sound is radically improved.

After a year of intensive use, I do not regret my choice but I think today for the same price I might have a tendency to look to the Asian high-end: the back and sides against plywood offer dynamic sound but lacking in depth, and the original action involves significant work (filing the nut, but also touch the bridge) to make the 110 capable of supporting more technical musical performances.