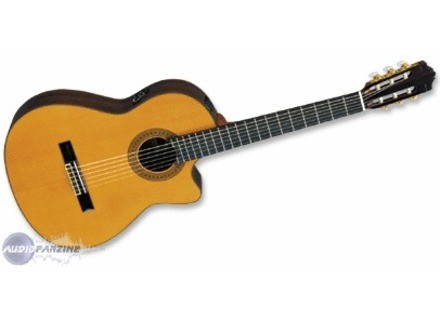 All user reviews for the Yamaha CGX171CC

Yamaha CGX171CC
5
Made in Taiwan, back, ribs and touches 20 frets rosewood, nato neck, and solid cedar top (and it is).
A piezo in the bridge, and A condenser microphone mounted on gooseneck in the box, all managed by a Yamaha preamp (I have heard that the older models had a Fishman), including 3-band EQ with parametric mids, master , condenser microphone volume and phase inversion switch (to avoid feedback, very useful in live).
For now nothing disappointing, and counting. I am not 10 because perfection is found in a luthier and not in mass production, but otherwise no complaints.

The handle is a real highway, a walk in the park, no problem frisouille on mine, especially easy access to acute, the cutaway is for.
She is very mild and very pleasant to learn, about the sound, I get there.

So, I'm stuck. I tested a very high standard AER in the store where I bought it, it was always enjoyable but I was not sure of the result to me, on my Kustom 50W all-tube that is made for electrical at the start. And I was wrong. She has a kind of fullness in the sound and versatility that brings me to almost give up folks and archtop to do with her playing.
I play jazz prog / jazz rock / bossa / progressive rock / gypsy jazz and trad with, it démerder as a great and goes really well everywhere, but are not neutral because the EQ works well and can really take almost any sound. Recording, it also shines with its versatility, it can blend into the mix (for a pump gypsy example) or out with a nice shine solo, and to top it off, the condenser microphone that it turns to the environment in a great percussion (it's almost a tabla, slapping the sides).
In short, conquered.

I use it for almost two months and I did five concerts with her.
The only thing I could blame him if it is not to be duplicated at home, it is mechanical, rather feeble (and ugly) with the rest of the instrument, but hey, I'm willing to invest 60 euros more.
The big, very big highlight in my opinion is the capacitor in the box, which really adds a depth to the sound crazy (in bossa is ecstasy). That said, if it is cut, the piezo works fine by itself.
I will not judge the ratio Q / P because I bought in a store right in the clearance and the seller gave me over 50% off, so 300 euros for a corny like that, it is given. That said, I think even at 700 euros, it's still a case against competition.
And with experience, I sink again, because I am now a musician more than broke, but very, very happy.
To put all hands, I'm seriously thinking of getting married with her.