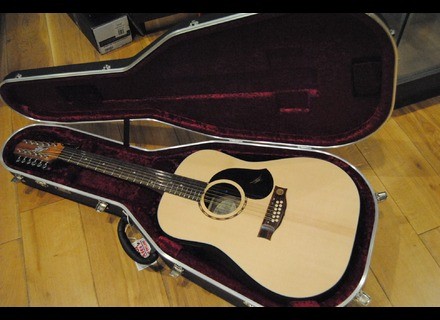 Maton EM425/12
4
First of all, I bought this guitar when MATON announced they wouldn’t make this model any longer (possibly after they decided to stop using Queensland walnut for their guitars). I possibly bought the last available new model in the whole Europe, so I had to salute this now former model by posting a review on it.

I’ll also mention that I only play some sort of bluegrass/rock with several kinds of open tunings.

Easy to use from the beginning. The neck is wide (as with any given 12-string model), but not really thin (not as much as a Gibson). Also, in spite of its important scale, the strings’ gauge doesn’t seem too big.
Soundwise, its main asset is the articulation between notes, making it easy to ear the harmonic nuances which is essential for a 12-string to make its sound bearable.
An impressive projection (aka no more talk with your pals while playing). The lows, mids and trebles are really balanced. I expected the lows to be predominant, but so far it features Elixir strings so the sound tends towards the trebly side. I may see later.
Once plugged in, it gives one of the best sounds I’ve ever heard, as true to the original sound as can be (ala LR Braggs on a Gibson), allowing to re-balance the lows. It also perfectly suits the use of a Screamer or overdrive to raise the volume.
Tuning: the 65 cm (25.5”) long scale allows for the most extreme open tunings with no problem, while ensuring the strings a long life. Beware when you choose a capo, it takes a real heavy pressure to work on each and every string.
Finish is perfect and flawless.

Nothing better demonstrates what this guitar can do than this video: