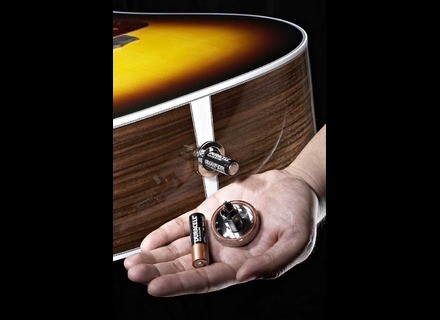 D-TAR Wave-Length load N' Lock
4
(Originally written by dariasse/translated from Audiofanzine FR)
I've been owning it for one week. I installed it on my Guild.

It doesn't require you to make a hole on the side. The system for the jack looks awful but it's hidden buy the strap.

I know Fishman and Bband very well. Each one has its own advantages and disadvantages.

Inside the guitar you'll find a big preamp with two trim controls for high and low frequency adjustment. Its nice to have these possibilities but they are not easily accessible. You have to take everything apart and reassemble it again. Very irritating if you didn't make the right setting!!!

Very good sound. But don't expect it to remove all "quacks" because the guitar still uses a piezo pickup. I've noticed some level unbalance between strings. I think (I hope) it's a nut problem.

When plugged to an amp the sound is crystal-clear. It is brilliant and smooth. And it's true that you can play violently without saturation.

I will update this review once I have solved my problem with the low E string (too loud) to describe the whole frequency spectrum.

Compared with the Fishman (I speak about the piezo and not the electret mic in the body) and the Bband (which has a poor signal to noise ratio), the D-tar sounds better (although I mounted a Prefix premium Blend in one of my acoustic guitars). It's not perfect, but better.

However I have to say that the acoustic sound of the Guild is much better than both others, which sport pickups from other manufacturers.

I will update this review later.

UPDATE: I filed down the bridge nut to lower the action. Now the volume balance is nearly perfect on all strings. The low E string is not too loud anymore. The sound is good amplified when I play at home but I haven't tested it live yet. You can play hard without distortion. The sound has less "quank" than the Fishman. As a summary, I'm very happy!

I made all tests in my home studio with linear speakers not with an acoustic amp.
Did you find this review helpful?yesno
»

dar-dar's review (This content has been automatically translated from French)

D-TAR Wave-Length load N' Lock
4
I for one year. This team my Guild.

No dcoupe in clisse. A big "bulge" or the jack is plugged (not beautiful but hidden by the strap).

Fishman I know by heart, Bband too. Each has its advantages and disadvantages.

On the inside of the guitar there's a big Pramp with trim for acute and trim for serious. It's nice to be able to rgler but it is inaccessible. Everything must disassemble and reassemble. Extruded Cut hello if you got too much treble for example !!!

Cot sonority has rings. Not believe that a enlve all "quank" we remain in the world of the piezo. For now I have a nasty imbalance between levels of the strings. Yet when I tap the entire length of the microphone there's no differences. Probably a problem Nut correct, at least I hope.

The sound is crystal electro especially the mids and treble. A beautiful shine, it's sweet. And it is true that we can play without violently saturations.

In short, once I have this problem rgl low E really too hard, I will give my opinion on all frequencies.

In any case based on the fishman (compar just piezo, not the electret microphone in the box) yet I am prefix premium blend on one of my acoustic and Bband (I have one on another, but that blows and without loose prvenir), D-tar is better. Not perfect but better.

After, must know that the guild is really acoustically above the 2 other guitars teams of other sensor marks.

I come back in a few time to correct everything.

EDIT: I have voil baiss the string action by filing the bridge saddle. As a result, I find myself with a volume of almost perfect balance of each string. This low E is not too strong. So I remade some testing branch and confirm that it sounds good. Will have to see on stage but the house is really clean. Fort one can play without distortion sound. Much less "quank" that Fishman. In short, really happy!

PS:
All my tests are actually home-studio on neutral pregnant and not on an amp ddi the electro-acoustic. So nothing flattering.
Did you find this review helpful?yesno
»