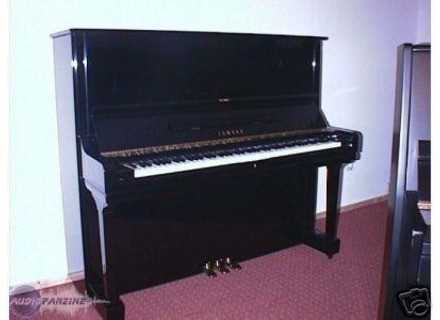 U3, Acoustic Piano from Yamaha.

All user reviews for the Yamaha U3

Yamaha U3
4
This is an amazing piano, made by one of the most respected and trustworthy piano manufacturers in the world. The process that it takes for one to be made is a legend in and of itself. The same family has made these pianos in Austria for about 180 years. Each piano takes about five years to make and is meticulously crafted. It was a rare pleasure for me to be able to play this piano, as a host whose house I spent a weekend in had one. Before touching it, I saw that the bottom end of the keyboard extended to F, which was cool, as I was used to the normal ending point of C. The first thing I noticed after I started playing it was the immaculate feel of the keyboard, the comfort and response. It felt as though there wasn't anything getting in the way of me playing the piano and the sound emerging from it. Speaking of the sound, it was interesting in that it felt absolutely enormous yet wasn't so overpowering as to greatly disturb the other houseguests. One of the great things about this piano is the smoothness and sweetness that it contains; each note played, regardless of how loud or soft, high or low, comes out smoothly and accessibly. The dynamics can go from pianissimo to fortissimo easily, and without a drastic change in tonal quality. Single-note runs, heavily accented chords, everything sounds great on this piano. That makes this piano ideal for classical pianists primarily, as a jazz pianist would probably need something with a bit more of an edge and a harder timbre. This piano is insanely expensive, so I'd have to say that this is probably a lifetime investment for most players. However, there are many pianists worldwide who would agree that it would definitely be worth it.


Did you find this review helpful?yesno

Accordeur-Bruxelles's review (This content has been automatically translated from French)

Yamaha U3
4
About Yamaha U3, I can not, given its price, whether to recommend it to anyone studying the piano so diligently and intensively.
the instrument is robust, and for optimum benefit from the richness of its sonic possibilities, like all pianos, it must be given 4 times per year (with each change of season) during the 2 years following the purchase of this new instrument.
As a result, do give two times a year, in spring, after turning off the heat, and autumn, 2 or 3 weeks after rekindled.
As with any piano, move it, as far as possible to 1 m 50 for all heat sources, including exposure to sunlight.
Optimum temperature between 18 and 22 °
Humidity averages 60%

Yamaha U3, very pleasant to give, very robust, ideal for music academy students a good standard, excellent value for money.
I will cite the example of my first student that I learned piano at age 8, he studied piano at the music academy, and was admitted to the Royal Conservatory of Brussels.
His Yamaha U3 remained loyal throughout his studies, which have made him a virtuoso he is today!

Thank you for your attention and see you soon.

Ludwig_zen's review (This content has been automatically translated from French)

Yamaha U3
5
The piano where I was "growing up".
I had the opportunity and the luxury of this model to study piano.
I've mostly classical and trs sound is warm, round and singing.
A wonder to an average budget.
Did you find this review helpful?yesno

Abalorla's review (This content has been automatically translated from French)

Yamaha U3
5
Magnificent and imposing upright piano. I bought used six months ago. I wanted to buy a new piano, but trying APRS prs two dozen upright pianos (all brands between 3000 and 12 000 euros), spending several hours at my dealer, my fingers kept coming back to this piano.
I play mainly jazz, for which there is perfect but it can not accommodate any style auun problem.
Yes I do it again this election ... I think the only day I will be able o have regrets will be the day it will take the o ... dmnager The bte must 300kg.
We find it quite frquemment on the second hand market (a little less than nnanmoins U1). If you have an opportunity to DCID, verify property (made vrifier) ​​dtail in the state of the piano.

toinebass's review (This content has been automatically translated from French)

Yamaha U3
5
I've had two years and that is the most j'apprcie his touch and sound.
I bought in a store in the region has a large hangar with that Yamaha!
The date he had a concert pianist who came to choose silent for her friend singer.
It has almost all the tests (U1, U2, U3) and the end he left the choice with preferences 2. Her friend took the other and I have taken the one who had his preferences.
If I had to choose another one that I would resume MODEL especially for those who make the Jazz!