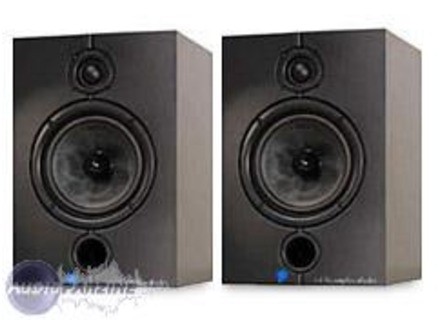 Diamond 8.1A, Active Monitor from Wharfedale.

Wharfedale Diamond 8.1A
4
I got these monitors in a studio bundle I bought used off the website craigslist. So, I didn't actually go out and buy these specifically. The reason I purchased the studio bundle was to get the rest of the components to complete the bare essentials of my home studio. I have been using them to mix down my professional studio recordings for my full length album. I invested a lot of money in to this album but had to stop the project early due to financial trouble. I decided to finish it at home and got these to get me going.
I use this in conjunction with a presonus Firebox and a MacBook laptop (2.2 ghz, 4gb ram, 120 gb hd). I am running Logic 8 and Reason 4.

The frequency curve is okay. They are much flatter than the pair of Behringer Truths I was using before. The stereo image is pretty good also. It creates some decent space and spread. As for sound spectrum, I am not one to quote Khz's (yet that is) but I would say the lows are somewhat muddy at times and hard to distinguish from each other (bass and Kick). I would say that the dynamics are its best feature. These monitors stay in a nice natural range which is good on the ears

I have been using these monitors for 4 months now. I was for some time using a pair of Behringer Truth 6&quot; powered monitors. When I got these I noticed how less fatigued my ears were after an hour. In fact I could mix on these for hours, 4-5 somedays straight (with bathroom breaks of course) and not be ringing or had mud in my ears. I have used much better monitors before but was thankful when I got these, especially after the &quot;Truths.&quot; What do I like least? Well, I would have to say the inaccurate mixes I get off of these speakers are the biggest let down. Its not horrible, but they don't perform well in the low's and cause me to have muddy/bass heavy mixes quite often. You will definitely need a sub to get good lows. I just ordered a pair of JBL lsr 4328's, and have used them before. The JBL's blow the Wharfe's out of the water, but that is to be expected when the JBL's cost $1600 and the Wharfe's cost $300. But the beauty of it now is I will have a set of beautiful, ultra flat monitors and a pair of low grade monitors, much similar to the average home theater systems, to A/B. Most engineers I talk to consider a/b-ing a must, and I agree. As for other models, I have used the Behringer Truths, the JBL lsr's, a nice pair of Event's and the wharfedale's. The JBL's were my favorite, hence why I just ordered my own pair. Well I got these for about $120 for the pair, so that was a great value. New I believe they go from $270-$300. For that price, they perform pretty good. That don't make your ears sleepy to quickly and they give you a mid quality sound, way better than those &quot;Truths&quot; at half the price. Again, I got mine for cheap so I would definitely do that again. would I buy them new? At the time I needed decent monitors for cheap so yeah, I would have bought them new.
Did you find this review helpful?yesno
»

Wharfedale Diamond 8.1A
5
(Originally written by dariasse/translated from Audiofanzine FR)
I wanted some compact and inexpensive monitors for my home-studio.

I wanted some monitors that did their job, i.e with a linear and well-balanced signal reproduction, to mix my demos without having surprises when I hear my mixes on a hi-fi system at home or elsewhere.

After 2 years of use I'm still fully satisfied with this product.

I repeat that I'm using them for my home studio with a multi-track system.

The frequency response is linear enough and the stereo imaging is good.

How does it sound? The sound is quite dynamic and accurate on the whole frequency spectrum. It's smooth and powerful.

Their look, their sound, their linearity, and the fact that elsewhere my mixes sound exactly the same as with my Wharfedales.

I tried out several monitors: Behringer, Alesis, etc. but this monitors had the best value for money.

Don't forget it's a budget product...

For a home studio I would buy them again with my eyes closed. They are compact, with comprehensive connections (RCA, XLR, jack) and they sound good!

This brand is not famous but the manufacturing quality is good.

After 3 years of use. I'm still utterly satisfied, I've had no problems. I even use them as monitors for small unplugged gigs!

A subwoofer would be great to expand the low frequency response...

Edit 2: I added a Tapco subwoofer and it does enhance the frequency response, but I sometimes turn it off to check my mixes.
Did you find this review helpful?yesno
»

Wharfedale Diamond 8.1A
4
I was most motivated to buy these because I definitely had a budget to keep in mind, but I didn't want junk I'd only replace in a year or two. I purchased them specifically for use in my tiny home studio where I record guitars, bass, vocals, and program drums. I wanted a monitor that would give me good accurate feedback on what I was creating so my efforts weren't wasted later by realizing it sounds like crap on my home stereo. These are incredibly quality monitors for the price.

These have a very wide open soundstage, excellent accuracy, and some good clean bass not normally seen in this price bracket. They really let you know if your mix is muddy or tight. Comparing these to some KRKs in the same price range, these boast slightly better (to my ears) clarity and are easier to sit in front of. So definitely, if sound quality is your priority and you want $600 sound for less than $300, get these and don't look back.

If you want a great sounding speaker on a budget, buy these - I can't imagine a better sounding speaker for the money. My money is too valuable to buy anything thats low quality in the end, regardless of what budget I'm on. I tried out as many as I could, Truths, KRKs, and M-Audio- the bad quality reviews on M-Audios were enough to keep me far far away from those. But wharfedale gets nothing but praises in the quality department. The only exception with these monitors in my opinion...... are the grilles. They are terrible, I accident broke one taking them OUT of the package. The plastic is brittle. I nhad to go ahead and take the other one off and rock 'em without grilles which is fine by me but I always like to keep gear in good shape for resale if I have to upgrade or whatnot. But I gifure if thats the biggest problem I have, then I'm still doing pretty good.
Did you find this review helpful?yesno
»

stratosweet's review (This content has been automatically translated from French)

Wharfedale Diamond 8.1A
3
I bought these monitors on the advice of a seller when I knew absolutely nothing. I need my sound to the first workstation, that is a Fast track (first generation).

Overall, the sound is pretty decent. Compared with others, I find the lack of low precision.

Actuelleemnt, I would do not have that choice, but I have not the same stuff, and I need a much higher quality.

Did you find this review helpful?yesno
»
Read the 8 user reviews on the Wharfedale Diamond 8.1A »