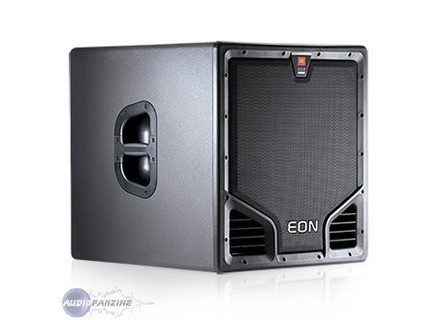 JBL EON 518S
4
The EON518S delivers great sounding bass out of its Class D power amp. It has a switchable high pass filter and 500 watts of power. This subwoofer is very portable and it really is not that big at all. The EON series of speakers from JBL are very reliable but they are not my favorite ones that they have come out with mainly because at high volumes they do not sound as good. But these are the more affordable subs from JBL so you will not get the best sound that you would on the higher end ones.
This sub can be pole mounted or used as a main on the floor. It has plenty of headroom and sounds great in a smaller sized space. On music with a lot of lower tones and pulsating bass it will sound great.
I have been using this sub for over a year now and I love using it for smaller spaces because it is a lot easier to transport than my main woofers. That was the main reason that I purchased this in the first place. I did not want to take my main woofers out all of the time just for smaller venues and smaller spaces. I can easily get this in and out of my truck with my other speakers and get it inside the club. This is the perfect woofer for a gigging musician who does not have a crew with him to help with gear. You will be able to take this woofer with you wherever you need to be at and do it all yourself without having to worry about lugging around a lot of weight.
If you want more power you can easily daisy chain these together, so that later one if you grow you will not have to repurchase another woofer. This is a must have for a solo gigging musician with limited space and help!

JBL EON 518S
5
This is a bigger sub with a power amp and stereo blanced outputs and not to mention the switch able high pass filter that can really get the job done. We make a lot of music with a lot of low end baselines and thump. So we always are in need of a woofer that can handle those low end sounds and thumps. This sub is only 500 watts but it feels like its much more and when you hook it up to your existing system it will just fit perfect you will think it all came together in one package. You will get a great low end sound out of this even playing those really really low sub bass tones that most subs cant even pick up this can pick them up perfectly. We even do mixes of our songs specifically for this sub because we know that when we perform we want some of those low ends on our drops to just pop out and take control of the whole song and the JBL EON 518S allows us to achieve that without any problems. I am very pleased with the quality of the 518’s and I find myself recommending them to so many different people who make music with a lot of low end it them.

The low end is thick and clean, so if you have a hardstyle kick and low bass notes you will need a sub woofer like this one that can get the job done, the sound carries really well no matter where you are in or outdoors with this sub. I highly recommend at least trying it. It is also very affordable , its more affordable than most other subs and sounds better than most. I have used better subs than this one, but for price and quality you wont get any better.

willy31's review (This content has been automatically translated from French)

Dj djo's review (This content has been automatically translated from French)

JBL EON 518S
3
I used two at a party in February 2010.
Like many low rounds, sub-bass are present.
The only problem: at a party two amplifiers incorporated smoked at the same time.
Luckily I still have the 2 rcf art 705 as "Made in Italy" and not "in mexico.
I feel that there is a laxity in some series from jbl eon example 515 made in china! and 518S made in mexico! In addition, I have the impression that the eons have a manufacturing defect: In a club one of the ancient eons has been damaged (p series 15) same for g2. A year ago I saw an eon g 2 for repair.
I think they are a bit expensive for their value.
Because of this problem as I am able to make another choice, I replace them with other art rcf 705 aces. Finally I'll be quieter.

Did you find this review helpful?yesno
»
Read the 5 user reviews on the JBL EON 518S »