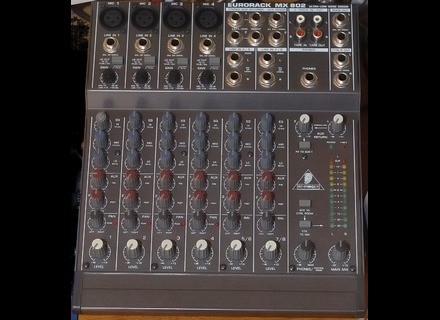 All user reviews for the Behringer MX802

Behringer MX802
4
The Behringer MX 802 is an analog mixer that is affordable, which is the reason that I purchased it. I really do like most products from Behringer because most of their products are affordable and still have great quality. The unit itself isn’t that attractive so don’t expect it to shock and aww your listeners and music lovers.

Most of the knobs are built pretty well, I wouldn’t think they would hold up if it got dropped though. It just doesn’t seem like its “that” well built. It seems pretty fragile when just messing with the knobs.

Sounds are decent, but for the price you really cant expect to get much more or anything better.
EQ was ok, and no hiss was generated.

Overall, the mixer itself seems pretty good, but its stay with me was short lived when I sent it back to Behringer, for some reason the unit that I had seemed to be defective. I purchased it brand new straight front Behringer’s website not from another party like Guitar center or anywhere like that. After I had the unit for a week I noticed I was having trouble getting power to the unit itself. It seemed like the power cord just had a short in it. That’s actually what Behringer told me is that maybe its just got a short. So I went to the local store and bought another power cord/ supply for it to see if it would work. It was doing the same thing even with a brand new chord, so It was something in the unit itself or maybe where the power chord when into back of the unit. Either way I sent it back to Behringer and they where very nice and said they would ship me another unit right away but I just had them keep it and refund the money because I was going to try a different one. I did have the chance to use the unit for a good work before things got out of wack and started messing up. Im sure my unit was just a small defect and it doesn’t happen often. I love Behringers products and I know they create great quality gear.

nan3200's review (This content has been automatically translated from French)" Super price / opportunity!"

very easy to use, the knobs are small, but accessible.
and then do not buy a mx802 to mix like a pro!
it is robust, it's good metal.

the eq is a little rough, the sound is rather flat, but clean.
if you do not exceed levels 0db, no breath issued.

from the realistic (Tandy, who remembers?) to an old Dynacord over 50 pounds, through a ross, a phonic and Yamaha, I had a lot of other tables. that is not necessarily the best, but it is an outstanding price / weight / size / options!

I just sold after one year of daily use. I lacked rinks, so I spend a larger model, but in view of its possibilities is a good choice for the price at which it occurs (40-60 euros)
if one uses as input to, and the loop magneto, it has 9 different inputs.
not bad!
XENYX the current have a sound more punchy, but much less possibilities.