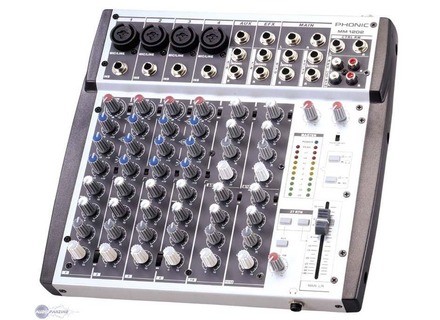 MM1202, Analog Mixer from Phonic in the MM series.

All user reviews for the Phonic MM1202

Average Score:4.9( 4.9/5 based on 7 reviews )
Value For Money : Excellent
Not satisfied with those reviews?
Our members also liked:

The general configuration is it simple? - Simple
The manual is clear and sufficient? ...- Sufficient
The usual functions are they easily accessible? - With little fingers yes ^ ^ '

The console is transparent? - Enough
The equalizer is effective? ...- No, it's pretty ugly
Introduces it's breath? - Not

How long have you use it? - 8 years
Have you tried many other models before buying it? - Yamaha, Mackie and
What is so special that you love the most, least? - The most: compact and reliable, the least: the EQ no extra
How would you rate the quality / price? - Excellent value for Q / P
With experience, you do again this choice? ...- I remake that choice.

brice69360's review (This content has been automatically translated from French)" I advice!"

Phonic MM1202
5
Non-rackmount console, speaker output jack (it loses the potato, but it does not matter) 48V ..
I put 9, because the effects are not intgrs. but hey, there is an effect between so ..

Simple configuration, I is not even read the manual (I do indeed have ever seen!). Everything is accessible.

Console quite transparent, it introduces no breath in my ear! (Even the big consoles introduissent of breath) is very efficient The qualiseur!

I use it for almost 10 months now, I'm still satisfied, it is my first mixer, I have immediately taken in hand. I love its size, which allows it to be take him everywhere! It can also connect a return, which is very practical when a large concert hall! The report price is excellent quality, knowing that I have been to 45 euros on the right-hand corner.
I REFERRED choice.
Did you find this review helpful?yesno

Thibaud GRIMONET's review (This content has been automatically translated from French)

Phonic MM1202
5
For features, I let you look at the site constucteur or photo. Take just that in the range of small console all brands is the most complete remaining very portable, a 3-band EQ, two aux sends, a meadow, a post which is rare, we find a single general . I put 10/10 as it is really the most ideal of all the little console, I compared it to yamaha, mackie, alesis soundcraft and is the best.

Very simple configuration is the analog basic, but clear manual summary, I have not really read ...
Nothing to say.
A so, that the department dedicated to the effect takes place only post fader, it is not very serious but I like a good choice.

So there I bleuffé, I tested many large consoles (coming soundcraft, midas Venis, Yamaha 02R, Yamaha 01V96, tascam DM24, ...) and frankly a very good phonic sound. I bought it because I needed a tiny console musicians to record an arrangement to prepare at home, I would not move an entire studio to do that was taken from the trash eventually. So after 10 minutes of balance, I really alluciné, the sound and warm, clear, no wind is felt extreme, the sound is really good. This is not comparable to his midas, but better than Yamaha and Mackie!
Again I put 10/10 as a console 130E, you can not ask for more.

This console is in its range in the best position. It allows you to make homestudio with quality sound for recording two tracks, it is fine. To live is the small ditto, 4 voice full or you can put the microphones, and four saw no EQ, where you can transplant the scratch amp, bass and another using their respective EQ. The big positives are the effect sends two in number, they can manage a return circuit and a start to a reverb or other, very useful for the little scene! I do not work personally with small consoles of this type, but a friend who I lent it to his concert in a small scene confirmed my opinion: its very good, very complete for the size, very portable, not dear all, what more could a ptite console?!?
Please note, new range PHONIC are not the same as the MM series is highly recommended, the other less.
I put 9 because nothing is perfect and then more would be possible!

Sonnybass's review (This content has been automatically translated from French)

English manual, but simple read trs
Trs and easy to use

The functions of Eq a console is not gnral prvues a substitute for real external processors. Those given are sufficient for my needs.

I use 2 config:
- Home studio (small)
- Small scne with my jazz band
- Great to grate scne connections of my bass and my acoustic electric bass, before attacking my amp. Bass is my team diffrent cell technology with two outputs that can not indpendantes same CHARACTERISTICS (level, color of his ,...). Dc I need to mix these two outputs for the sound to avoid the DSIR and unplug qd I change my instrument.

Report qualitprix excellent
I do not regret.
Bravo

ss-1's review (This content has been automatically translated from French)

Simple for someone who dj knowledge! Its functions easily accessible via potientiomtres. The manual is in English.

The sound is prscis. No breath is gnrer trs bone table this. The equalizer is playing its role does not kut bottom.

I had a bf makie VLZ a 600 Euro. Apart potiomtre a little "game from a very clear.
beautiful front suggests the need.

Quality amazing price of the rub imposible Kuter. Congratulations for the rest phonic.
Did you find this review helpful?yesno

vutana's review (This content has been automatically translated from French)

Phonic MM1202
5
The EQ is not parametric. One to send and efx send. Everything else can be clearly seen on the picture!

It is very simple. The manual? I've never really looked at, it's useless.

His level, I find it very transparent, excellent signal to noise ratio.

It's been a year since I use it in home studio. She was advised by my dealer that had it in stock, and I do not regret my purchase!
Did you find this review helpful?yesno
Cookies help us improve performance, enhance user experience and deliver our services. By using our services, you agree to our use of cookies. Find out more.