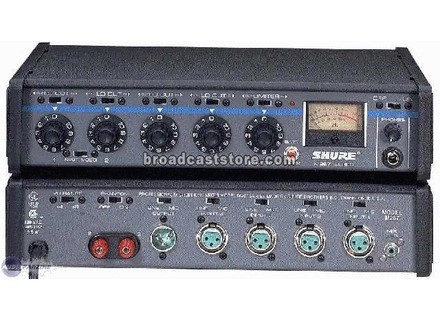 All user reviews for the Shure M 267

Small lightweight and robust mixer produced by Shure from 1983 to 2000 for the story and broadcast TV, radio, and audio studios. Simple and effective, it is not a preamp, and the limiter threshold is adjustable. It has a 1000 Hz oscillator which is used to calibrate the catch and to avoid changes in the level of a report to the next and the phantom power supply on the four inputs.

Absolutely transparent, the breath is still distant. Material is very professional without gadgets or embellishments. Was used in France and are still used Girardin, the LTM, the Sound-devices, the EAA. The Shure M267 is more modest, less expensive, yet very effective. Do not try to take the gain, it is not for that, we may saturate and do blow.

I've always had a story in that j'enmenais in case. She often helped out and helped make my decision when the heavy equipment "pro" was absent. It is very easy to implement. The preamp of the headphone output is a little weak. I have a studio in which I eventually deserts packs for drums. At the time it cost about 250 € -300 € I think he said. There are many more machines Hi-Tech, but I like its simplicity and reliability.