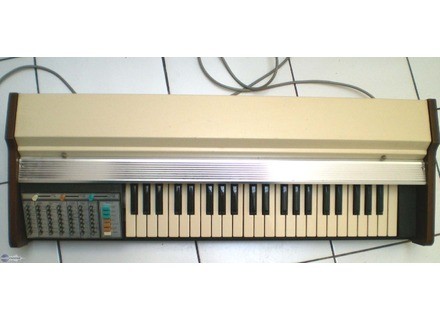 View other reviews for this product:
It is indeed a synthtiseur and not an organ, you read that right. Indeed, the firm clbre Hammond organ builder rputs, made two attempts on the market synthtiseurs the mid-70s, just APRS its acquisition by Japanese. The MODEL 102 200 t was produced that 200 copies in 2008 the number of copies still in use worldwide is estimated 50. Sale price the era: $ 4000.

The keyboard has 44 keys, although obviously not aftertouch, or VLOC. Controller? Not at all (note even when a volume slider and a slider tuning).

The connection is seen Reduces its simplest form, a mono output jack 6.35 and that's it.

There are 6 preset sounds basic (french horn, tuba, violin, sax, clarinet, solar echo), but it can also "CRER" sounds by selecting the diffrent positions of switches 49 that are on the panel , plus the possibility to use the cursor to "wind" produce white noise. The presets are not "combined" when using panel switches, they must be DSelect.

There are a VCO and a LFO.

There is no memory of sounds.

The bug is monophonic, which corresponds to the standards of the era (the first was the polyphonic Polymoog).

Curiously it plugs directly into the 230 V, with no possibility of switching 110 V in the rear, suggesting that silent exclusively for the European market.

Even if there sailing on a sea of ​​wiring under the hood rgne a quasi-military discipline: card = a function, all the cards are plugged into slots.

Configuration gnrale s'avre simplissime, pressing buttons and presto, it is difficult to do more "plug and play". So the edition of sounds becomes possible for anyone, no need to book.

The edition sounds: So two choices are possible, the 6 preset sounds, and then pressing the "cancel" (which dsenclenche all other preset buttons) the edition of sounds. The panel is CONTRL dcompose in five major areas:

- "Tone pitch" to choose the height of the pitch (32, 16, 8, or 4) for each height with the possibility to select the square or triangle (except for dernire height [4 ' ], it will be sawtooth or nothing)

- "Tone filter" (dclenchement time of the filter) and "Filter Rise & Fall" (width and speed) that control the filter rsons, these two commands are provided with a bypass,

- "Attack / Decay," nothing very complicated is the classic ADSR envelope,

- "Pitch Bend", this function allows the hard of rgler pitchbend,

- "Modulator", a vibrato amlior overlooking some sound effects close to the fuzz.

The cursor "Wind" and produces white noise can be superimposed on the sound you Dfine, but gnrateur noise can also be used in solo and be modulated by the filter and the ADSR (other commands are inoprantes upon him).

The sounds are not ralistes (I never understood the desire of manufacturers to want any price Submitted synthtiseurs the general public as instruments of imitation, as they are instruments by Entire CHARACTERISTICS their own).

The notion of expressiveness is meaningless on this type of gear.

Of the 6 preset sounds, only the sound dnomm "clarinet" sounds like the instrument it is supposed to imitate. For four other sounds of imitation, "trumpet" "tuba" "violin" and "sax", one remains in organ tones, even when powerful (sawtooth wave). Regarding the last sound preset "Solar echo" It is an attack with a relatively short Crant vibrato effect fuzz and a filter that gives a lightweight rsons flanger, plutt disco in mind.

The bass is the real low (VST tell you?), And the filter can be rsons sounds a bit acidic.

According to the specialist in, the sound would be in line with the Roland SH 1000 and Arp Axxe ( http://fr.youtube.com/watch?v=x5A7ADhNWPQ )

Purchased by this beast curiosities s'avre friendly IMMEDIATE use by its appearance.

The collector of intrt RSID public in its approach, the antithesis of the Korg MS20 and others. Only buttons, you press and you see what a given, plus cot in each figure a switch curve giving an indication of the choices made.
However the sound is nevertheless a good analog sound with the grain in the lower. Despite his 33 years at the counter, it produces almost no breath.
See the source
Did you find this review helpful?yesno
Cookies help us improve performance, enhance user experience and deliver our services. By using our services, you agree to our use of cookies. Find out more.