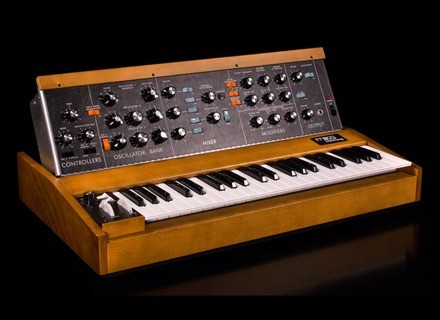 All user reviews for the Moog Music Minimoog Model D (2016)

Average Score:5.0(5/5 based on 1 review)
Audience: Advanced users Value For Money : Correct
Not satisfied with those reviews?
Our members also liked:

Moog Music Minimoog Model D (2016)
5
If you’re reading this review, you already know the Mini (well, if you don’t, please leave Audiofanzine instantly and go read something else – Garden Design Magazine, Your Horse or anything else non-music-gear-related), so I won’t detail further the various pros and cons that characterize this true legend of electronic sound...

This review will mostly focus on its difference compared with its ancester.

Out of the box, the magic is already here – it’s a real Minimoog! The machine is heavy, the woodwork is beautiful and the knobs are huge – superb!

When you first plug it in, the Mini requires a few minutes to stabilize, then you start tweaking the settings. Here you are! THE Mini sound as you’d expect it to be! It sounds punchy, vibrates, provides a round, warm sound, so you get everything you like from a Minimoog!

Let’s now get to what this 2016 version does better:
- the keyboard is a Fatar, it may be a little harsher to play than the original one’s but it’s very pleasant to use
- the aftertouch (to be plugged in on the top panel – affected to the filter cut frequency for instance) and its intensity can be set using a small wheel on the top panel (like a lag processor). It’s a great feature which obviously adds a certain expressiveness!
- the same goes for the velocity – great!
- an LFO (triangle or sinus) was added, its switch is located next to the Decay switch and allows to change the waveshape and to change the LFO’s speed. Another knob allows to route the modulation wheel towards the LFO or something else…

What more could be said on the Minimoog? It’s a synth that goes beyond rationality, synth lovers won’t be left indifferent to it – after all others love cars, or stamps, or expensive vintage guitars… No matter if you love or hate it, this instrument has a place in electronic music history!

To me, this 2016 version is particularly advisable to those looking for a Mini! The sound is here (like with its ancestor), and the addition of new features gives it quite a boost! Granted, some will say “yeah, great, but the original’s components are instable, and in the end”: all I’ll tell them is that the said components are now 40 years old and may die out anytime, or at least they won’t work long before they have to be serviced, and the sound qualities of both models (the original and the 2016 version) are objectively almost the same! The rest is just pro-analog nonsense (I’ll mention that I also use VSTs such as DIVA or FALCON to get the best of both worlds).

The price is rather high (almost €4,000, but don’t expect to lay your hands on a 40 year old vintage model much under €5,000). Yes, it’s expensive, but passion has a price so if you can afford it go ahead and you’ll get a legend under your fingertips.
I could afford it and believe me, I don’t regret doing it! It’s beautiful, I love it and I can’t stop playing it! One of the best purchases I ever made!
Did you find this review helpful?yesno
Cookies help us improve performance, enhance user experience and deliver our services. By using our services, you agree to our use of cookies. Find out more.