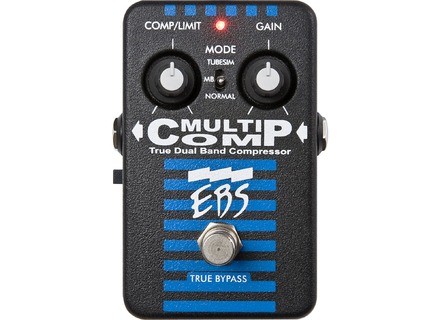 MultiComp, Bass Compressor/Limiter from EBS in the Black Label series.

Make Your Sound Even Better. The MultiComp can make a good sounding instrument sound even better. Once you’ve tried it, you’ll never want to play without it! The EBS MultiComp is equally good for guitar as bass, and is the best selling EBS pedal ever reaching 'Hall of Fame' status at some of the most well known online stores.

Less is more. The MultiComp may be the easiest compressor around to dial in. Since it is so smooth and well though out, all you need is to set the level of Comp/Limit with one knob, Gain with another, and then choose the type or mode of compression betweenTubeism, Multi Band (MB) and Normal. Done! For those that need more, there is an Active/Passive switch on the side as well as an internal trim pot for the Threshold located under the hood.


Purchased in April 2009 from Musiciansfriend. I'm a fan of Tony Levin, who uses compression as an integral part of his sound. I also wanted to add compression to even out peaks in my signal and to add some 'sparkle' and sustain in live situations. MSRP: $249; Paid $199.

The EBS MultiComp does make a big difference in my live sound, especially on a bass strung with roundwounds. It adds presence and a massive amount of sustain and allows a small bass amp to compete with three cranked guitars. Tweaking the compression amount and gain controls allows me to get more presence and gain from my amp without pushing the volume up. Once I started using it, I couldn't play without it. Three compression bands allow tonal variation, but I found the difference between solid state and multiband compression to be basically indistinguishable. However, the tube compression does add some warmth. There is no discernible signal degradation or loss of tone.

The unit eats a 9V battery in about six hours of constant use, and there is no battery compartment, so pack a screwdriver to take off the bottom plate. Although there is a pilot LED that glows less brightly when battery life is draining, I found that there's very little warning -- it's there one second and gone the next. There is a 9V CA adapter available for around $20, and I recommend getting one.

The EBS Bass MulitCompressor is a good value, although $200 for a single-trick stompbox might seem high. It adds presence, definition, clarity and sustain to active or passive basses.

With Bass is very effective but especially Natural and Musical!
In a mix, low spring better ...

Also on a strat and amp lamps, so if I assure you!
In this case, the effect embellished sound and adds the definition and precision.

Use it for 2 Years

I remake this course choices.
Did you find this review helpful?yesno
»

bouba14's review (This content has been automatically translated from French)" The bassist indispensable for all!"

Two buttons (volume, gain) is simple to find multiple sounds.
The English manual is pretty short. (I would have preferred to have several examples of settings.)
Only downside, the battery change is made only unscrewing 4 screws underneath the pedal. It is not practical at all, take the opportunity to address two small knobs above the battery to change your sound.

The sound is at the rendezvous. This is the ultimate in compression.

I use it only for 4 months. But if I had known the quality of sound that was available here in the group, I would have bought before.
I play jazz bass passive for 19 years in a rock band. I made the mistake of buying a lot of multi effect (boss GT10B ...) here thinking that would improve my sound. The sound of multi-effect effect tended to distort my sound by making vague. If I have any advice for beginning bassists all, do not waste time with muti effect (digital), go directly to the analog effect, you gain presence and accuracy in sound.
.

EBS MultiComp
5
Nothing to add ...

Easy to use; manual who cares; Issue: beeeen you lean on the big button, you turn and small ways you what it looks like.

Used with a low entry level with Bartolini pickups JB. I use it not as a volume boost, but a boost for short: I find that when I play with a group, my bass sound is audible and better without having to increase the volume. I put it in front of a SansAmp Bass Driver before attacking my amp: I think this pedal can have a clearly defined sound, not easy to explain. In any case, no question of separate.

I use it for 3, 4 years I only semble.Les compressors were tried before on Line 6 multi-effects. May be expensive at first but it is solid as a tank, it's his job. I do not regret this choice. Now, the competition offers perhaps best ...

Did you find this review helpful?yesno
»
Read the 24 user reviews on the EBS MultiComp »

See all 347 photos of EBS MultiComp »

View all 10 videos of EBS MultiComp »