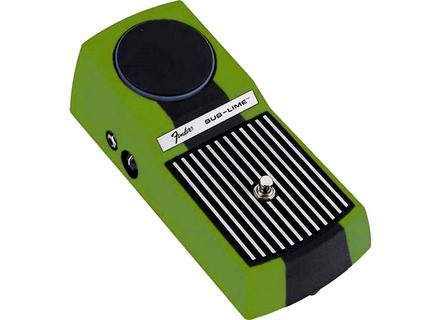 Fender Sub-Lime Bass Fuzz Pedal
3
Well -- it's green (lime). And it's big. As in huge, for a stompbox. I have the feeling you could use it to hold up a Volkswagen while you change a tire, but is that what you really want in an effects pedal?

I've been addicted to fuzz bass since Paul McCartney used it on 'Think for Yourself' on Rubber Soul, and I recall being scared to death when the Vanilla Fudge's Tim Bogert kicked in his fuzz at the end of the Fudge's 'Some Velvet Morning' cover. Any effect that can scare people is OK with me. But in my current playing situation, I don't need fuzz. So I went to the local music store just to see if I could still be scared so easily.

The Sub-Lime offers a foot-operable circular dial that allows the user to change the level of fuzz on the fly, with an LED circle display to tell you where your setting is on a dark stage. The Sub-Lime also maintains bottom, unlike many fuzz boxes for guitar. That's important in bass. Volume and drive settings are on the side where they can't be accidentally kicked.

It's way too big: takes up the same room as two standard size stompboxes. You can tweak crossover point and tone, but only with with trimpots located on the back panel.

Built like the proverbial tank, and almost as heavy -- 3 pounds.

The Fender Sub-Lime fuzz is a moderately priced ($120 street) one-trick pony that is way too big, especially if used on a pedalboard. For its size, you'd think it would have been possible for Fender to put an internal AC power supply inside, ala the old Mutron III. But they didn't. Fuzz sound is not bad and retains bottom. But I think the fuzz in the Electro-Harmonix Bass Micro Synthesizer is better. However, the EHX unit costs $150 more.

calourock's review (This content has been automatically translated from French)" The top."

It is easy to adjust once you dip in what was the settings above, below and on the sides. But I did not notice so nothing insurmountable. The settings below allow to keep the lower part of the sound spectrum and clear up with the fuzz.

This fuzz is amazing, you can go from light overdrive to fat saturation.
Whatever style of music that sticks. For every bass player.

I tested a bunch of pedal drive-distortion-fuzz and sub-lime is clearly over. For 2 years she never left me
Did you find this review helpful?yesno
»

Nioïko's review (This content has been automatically translated from French)" Big Foot = Big Sound! (But subtle!)"

Fender Sub-Lime Bass Fuzz Pedal
5
The Fender Sub-Lime is a Fuzz analog (I think), Made in Korea (good stuff!)
A mindless Fuzz.
A heavy steel box, but pretty darn solid! And with style!

The configuration seems simple ... Except when the pedal back and we see two knobs (OD-TONE and X-Frequency) ... A bit problematic when you want to adjust the pedal quickly. If three knobs are visible on both sides (Volume and Drive) and a huge pedal that acts on the presence of the fuzz from the bass sound, it is amusing: a system of LEDs located below that change color ("Oooooooooh") from green (left) and red (right) adding a little style to the pedal had no lack.
The manual is very clear when to use knobs. When we used to, we do it quickly.

Boy, that's a fuzz as I rarely tried. Not at all the sound of a Big Muff Pie, less muddy, less dirty, sharper and more dynamic. This is closer to a fuzz overdrive, but is not absolutely dry! Short term in a UFO fuzz, first time I came across this ... And what is effective! I use it with my Ashdown ABM 500 Evo II, and my Fender Precision Bass Deluxe Mexican series, and what it sends! We can do anything with! an extremely versatile pedal, especially for rock and electro! Well suited to quiet songs for a light crunch! And above all: Really quiet! no buzz, no breath to activate!
Anyway I like this pedal!

I use it for exactly 2 years! And she fucks! I tried a lot of fuzz and I do not have bad side of this one, but nothing comparable in sound! It is really different, and I love him for it, in addition to his look (a good solid look!). The thing I like least is the knobs below, otherwise do not worry!
A fantastic price quality ratio for its versatility! Fender has delivered a magnificent pedal but obviously is not for sale ... She would have a commercial oven? possible.

Ps: First bug recently arrived: the entrance to the adapter seems to be the cause of an unusual buzz ... After resoldered this component more worries!

In short: it's safe!