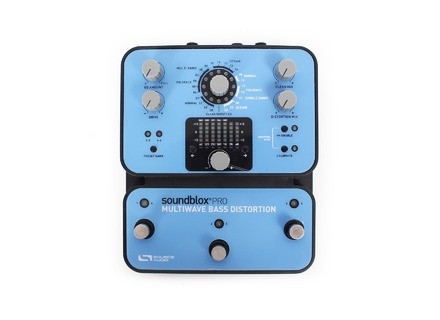 This was a test unit provided by SourceAudio. MSRP is $@19 for the Pro model, $119 for the basic model with fewer features.

If the Multiwave has a secret sauce its the pedals ability to create what I call, for lack of a better term, clean distortion. Im not a fan of over-the-top grating fuzz tone, but I want a pedal that can give me something other than the sound of an overdriven tube amp. The Multiwave Pro offers several unique distortion sounds through selecting just the right preset, judicious use of the seven-band EQ and mixing the clean and distorted sounds in the correct ratio. It also has superior tracking and sustain and reacts well to double stops or chords. I had a lot of fun recreating the synth sounds of Edgar Winters Frankenstein by using the pedals Multi/Foldback areas, and I was able to create the illusion of a guitar doubling bass by venturing into Octave territory. At least with my bass, the Single band areas of the rotary control (20-22) were less useful, but I was able to make my Lakland 55-94 sound very much like a Rick 4003 using the boost/EQ setting without distortion.

Only quibble is that the pushbutton to choose between preset banks might be converted to a standard footswitch to enable on the fly bank changes.

The Soundblox Pro Multiwave Bass Distortion is packaged in a heavy-duty attractive Lake Placid Blue box that isnt very tall but has a slightly larger footprint than most single-use effects boxes. Construction is solid with heavy duty footswitches for preset selection. easy to see LED indicators and graphic EQ 'bars.'

If youre bassist who wants a wide variety of distortion/fuzz sounds that can be tailored and controlled easily, the Soundblox Pro Multiwave Bass Distortion offers an intriguing alternative to other stompboxes in this genre. The Multiwaves multiband processing gives depth and clarity to distorted sounds without sacrificing critical bottom end, and the addition of an integral EQ that can be applied separately to each of six presets in a truly inspired idea. The ability to control straight and distorted sounds, plus EQ level and Drive, offer players control, and the addition of Foldback and Octave settings make it easy to add synthlike sounds to your arsenal. Far more than a simple fuzz box, the Multiwave is a powerful tone-shaping machine.