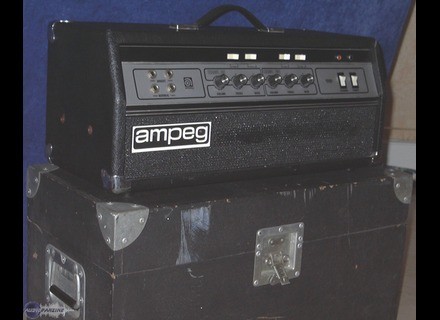 All user reviews for the Ampeg B25B

no manual, bought used, configuration could not be more simple. 2 channels with two separate inputs per channel (bright and normal) for each channel ultra low and ultra hight button to boost the bass or treble either. The only catch two 16 ohm speaker outputs, I have an HP 8 ohm output jack and death on the other (this is the former owner told me to leave it like that to reduce the impedance !?). if someone can explain to me ...
Otherwise the only lack is that there is no line out.

I used to with a modified jazz bass (adding a micro precision quality) and I have a good big sound fortification. I mostly use the sound Bright because my office is pretty serious, and I use channel 2 that does not quite sound the same as channel 1 (is this normal?), No ultra low but I put some sounds from time to time with my ultra Hight worst (the precision) microphone. I play pluto ^ t of rock and a little punk soul, not heavy or Jazz. I do not like the sound of ultra medium slappeurs it is great this amp is not made for that!

This is my first amp, if I change it will be for a lamp transistor mix (like EBS) or another more powerful Ampeg.

lolo_bass's review (This content has been automatically translated from French)

Ampeg B25B
5
55W all-tube amplifier manufactured in the 70's:
- Two-channel spars with a volume, an EQ bass / treble on each, a sharp boost, a serious boost. There is one between Normal and Bright on each channel, or 4 in total.
- 2 prampli lamps, a lamp shiffter phase, two power tubes, a light recovery.
- 2 outputs for HP to 16 ohms.

3 buttons with no decision-head, and then it sounds good right now ... it's ampeg.
No manual, but everything is simple, and there is a Schematic of the carcass mtallique al. The tricky point is output as 16ohms speakers are often 8 although it works well.

I love, well it's been two weeks that I have but seen as it sounds I never tire.
The power is not standard, and it allows to push just a little into a corner. Like that was the volume, and the beginning of the saturation of the lamps. I never heard that elsewhere. The sound is bold lightweight but warm, with a grain, but not pete mdiums Submitted testicle like other head! Waoo! You have to play even when I think of rock ...

I tried with a stingray and a Jazzbass, ca cash without any problem and it sounds again and again.

The lamps light orange and blue when playing is beautiful! In addition it is downright beautiful (ah ... the vintage)
I tried a lot of head transistor (Ampeg, Hartke, trace, H & K, peavey), but what good blah. The lamp has a grain ca! Of course you must like it. The sound is frankly typical vintage. A must try if you do not know the color because it is a type of amplifier that colors the sound (and beautifully), and not transcriptionist excatement the bass sound like most heads. Warning!

Last point. It is much more expensive than the argus 380 (mine 750). Why? It's almost a head found in Europe, who has 30 years, which is home ampeg and more, and that sounds good magic!

Well I'll be back in a few months to tell you if I'm still happy.