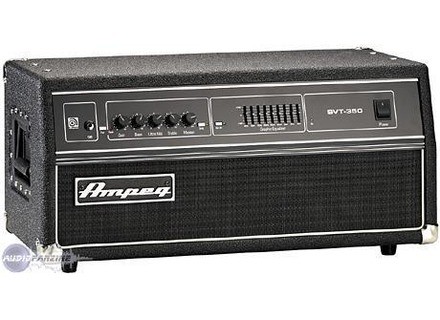 Ampeg SVT-350H
5
i play in a southern metal band called 3 Star Shaman, i am the bassist, we like to have a classic kind of tube, warm tone, it sounds good to me.

i bought this head off ebay for about $400

this head can cut through anything with any tone you like, great tube, warm sound, very nice and loud.

i can think of anything right now that i dont like, everything is perfect.

this is an ampeg so you know its sturdy, built like a tank.

this is the best head ive ever used, it sounds orgasmic to my ears, i will never use anything else.

diGo's review (This content has been automatically translated from French)" Solid and reliable."

Ampeg SVT-350H
4
Amp transistor 350w sub 4ohm.
Jack input with small switch (active / passive)
Gain-Bass-Middle-Trebble-Volume knobs for
9-band EQ to fine-tune (or not, I put in bypass)
Small compressor / limiter switchable (bypassed too)
We go out jack and preferably in a body of quality, sensitive, a 810av for example.

Behind andmore of the output Jack HP, there's input / output jacks including:
-Entrance Amp, if you want to use another preamp ...
-Sorti Preamp, if you want to use the preamp on another amp
-A effects loop with Send and Return
Out-a balanced XLR output
-A switch Pre / Post
Switch-a-20dB / 0dB

I put 6 because it is not the transistor and the lamp, and it's still the minimum offer various inputs and outputs, effects loops, XLR output is good but there's nothing to s 'rave ...

Must not have been the ENA to know how to use this amp.
Clean sound is pretty good. It's round, slamming deep ... You can get a good variety of sounds as you like. The transistor that has character and that holds up.

With a distortion is another thing ... it's cold ... and no lights at all levels is acute

You still have to admit, it's a AMPEG is typical and it's made to play rock.
When one puts a good bass that goes to rock, and you plug it into a body in the same proportion to the size of his ego brand it sounds.
On a 410, as the body is less sensitive, you still have to push a lot if you play with guys that have a large volume ... with a 810 is imposed direct some respect.

For example, jazzeux BTW go see if they want their shitty sound like a bass plugged into a stereo ... although removing all acute and spending 5 minutes on the EQ can reach a its almost as pourrave.

He served several punk rock bands and conviennait style perfectly.
It is also used in a pop rock band with a Squier Jazz Bass and it works well.
I used a lot in my group of grunge / stoner with a Gibson SG and a low distortion tube and it was not bad but as soon as I was able to retrieve an all-tube amp, I felt the difference.

I put 6 because the sound is ok but not transcendental. When we played on an Ampeg tube, we understand why it's more expensive, especially distortion.

I needed an amp quickly but I was not a big budget then this opportunity has done the trick.
No breakdown. Not very heavy. You can store stuff behind 2-3.
I have often seen the 450H with other groups with which we played when I was punk rock, 100w over it not worth it in my opinion because you may already have an impressive level with the 350H.

I put 7 because it still holds water and helps me regularly.
Amp to have in spare, just in case, or to lend to a good friend without worry.
But when you can afford a tube amp, it's worth it to change, even if it is a money pump, but that's another debate ...

Ampeg SVT-350H
5
350 w amp transistor all made in usa (important when you see the Asian manufacturing)
one black dot: no speakon plug (it is picky ...)

not need manual to realize that it's Ampeg, bassist worthy of the name, even a beginner, come to find his sound, for my part I play alternative rock us and I did not put 2 mins to find I was looking for.

I use a Fender Precision us 64 'reissue of 2008, this is the perfect marriage!, To say I also have a V delux JB, I have not even tried it with so I meet these criteria with precision. Obviously I coupled with my 410 cab He us is that of happiness. and it sounds as when I plugged the Kruger galien 410 is a little less typical, but it sounds, this is to say ...

benhiamoul's review (This content has been automatically translated from French)

At the front: a switch between jack with active / passive, a gain knob, a bass, one of mdiums (the famous ultra-mid of Ampeg), a treble, and a knob of with volume limiter switch, a 9-band qualiseur grams per switch.
At the rear: an effects loop, two speakers outputs, an output table ...

It measures approximately 60x29x33cm and PSE almost 20kg. Two grips on cots, and lots of room for storing cables and other effect pedals derrire under the Systm amplification.

The configuration could not be simpler (see above): a gain, a master, a knob of acute, one of mediums, a serious, and it's not enough, there is a 9 bands equalizer graffable.

This gives a good sound quickly trs! I never had the manual in the hands but I have not felt the need.

In addition, convenience, the transistor has at least the advantage of not having chang be "every other day" as the lamps. You buy, you connect, you tweak 2 minutes and you have the sound you are looking for!

No doubt, it is an Ampeg: a BIG warm and bright! Transistors to a head, she did not blush a pretty face of its competitors lamps.

I use it for the moment with an Ibanez Soundgear (passive) but that will probably not last (once my bank account-in-handed level, I intend to invest in a better quality bass Stringray type MM) . I also had the opportunity to play with a Fender Precision, and no surprises, it's even better!

In all cases, the head fits perfectly my expectations. I was looking for this sound so SPECIFICATIONS home Ampeg, and I did. It should all - is the style of music that I play with my band (rock / punk), and is versatile enough to allow me to go in registers DIFFERENT (Metal, Funk, Ska, Reggae) we int gronn in our compound, hardcore punk majority areas.

I use it mostly with qualo "V", and which is part of the knobs, with lots of bass and gain, treble and a little bit of mdiums: It's me gives a warm and bright, although Submitted trs and dynamic, the little I drang in the sound that comes out of my assurment low which is certainly not the height ... In any case, I could realize it when I tried it with precision.
This head provides a broad range of sounds but trs rock type (broadly defined). At the same time, to be expected: it rarely achte Ampeg to play the Blues or Reggae ... though as I said prcdemment it s'avre be quite versatile.

I have not been of shekels, but it suits me - done! I purchase a price rsonnable and I am satisfied with TRS! We will see over time if I track the limits, but it is of the same good.

Well, it clearly is not playing in the same court as the famous SVT-Classic (which is the Rolls in the registry) but it is much suprieure many more of these direct competitors, m my lamps! I tried other amps in Trace Elliot, Hartke (beurk!) or in more modern home sries Ampeg (SERIES B and SERIES Pro) and I prfr the SVT-350. That said, I do not really look that the SWR ct parrait trs too. Do not even talk about Mesa or other Marshall taient financirement innabordables for me. And then, having heard the sound I was looking for with the bassists who use Ampeg Classic SERIES I knew c'tait to ca need to lean, and it is no wolf!

Regarding the price, it is clear qu'Ampeg is fun, and that's why I opt for the occasion '! This is the problem with Ampeg LORD: it sounds, but it is paid! In retrospect, definitely I would do this choice ... unless it does not offer me an SVT-Classic Used to the same price as the new SVT-350, in which case I would prt ruin me! Otherwise, this head is all I expected: it is powerful, robust, efficient, easy to use, and above all it sounds! A great big warm and bright as I love them!

Did you find this review helpful?yesno
»
Read the 5 user reviews on the Ampeg SVT-350H »