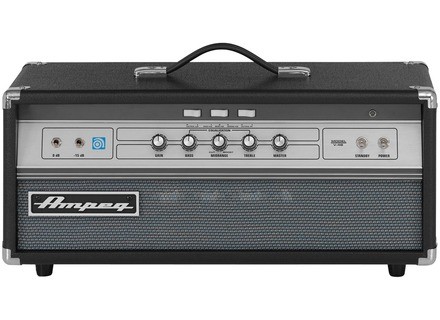 View all offers for Ampeg V-4B »

Ampeg V-4B
5
The Ampeg V-4B was originally introduced as the little sister to the SVT. It produces about 100 watts of power, where the SVT produces 300. For reasons to complicated to go into here it is not one-third as loud as the SVT but more like eighty or ninety percent as loud.

It has two inputs, with input one going through an extra triode in the preamp for slightly more gain than input two. Each input has its own volume, and they share a three-band active eq in which the midrange can be assigned to any one of three frequency bands. There is no master volume, nor should there be. There is also a bright switch, which is really useful in compensating for the differences in tone between flat- and round-wound strings on two different basses, or between picking and fingering. There is also a Low Boost switch which actually just seems to cut the treble and is basically useless.

There are two speaker jacks on the back, and a handy impedance matching switch which allows you to select from 2, 4, or 8 ohms.

Due to its huge transformers the amp sounds magical and weighs roughly the same as a girlfriend. It uses 7027a tubes, which have recently become available again, though I've heard mixed things about these new production 7027as. Mine still has the original tubes in it and they sound great.

Mine is a late-seventies production, so it's not exactly like the one pictured. It's got no polarity switch and a three prong plug.

Plugged in to the right speaker cabinet (I use an early-2000s Ampeg 8X10) this amp cannot sound bad. I have heard some people complain about volume or tonal balance, and these people usually turn out to be using crappy speakers or too few inches of speaker surface. I usually just leave the eq flat, maybe cut or boost one of the knobs a hair to compensate for the room, and turn the volume to the right level. I've played large clubs with this and never had to turn it past 10:00.

It is the sound of rock. It is not quite an SVT, of the same era, but it is ninety-nine percent as good as one and will cost you about a third the price on the vintage market. It also sounds way better than anything Ampeg has made lately, including their various attempts to keep the SVT alive. The new SVTs and the reissue, non-master-volume SVTs are both a waste of time compared to this. If you are choosing between two bass heads, and this is one of them, and the other one is not a 1970s SVT, do not hesitate to choose this one. The second best bass amp ever made for rock music, and at a significantly lower cost than the all-mighty SVT.

Just to be clear, I'm talking about a mid- or late-seventies V-4B, not the more recent 100 watt tube head that Ampeg makes, and which has a similar name. I used to have that thing, and it was not such a good amp.

There are people who say tube tone doesn't matter for bass, and maybe that's true in other kinds of music. In rock music, both heavy and light, you need a good tube head, and this is one of the best ones ever made.

jemfleabass's review (This content has been automatically translated from French)

Ampeg V-4B
5
Amp any lamp with a power of 100 watts delivered by 4 lamps 6L6, Made in USA by SLM electronics.
The standard connectors:
passive input and actve (-15 db)
XLR output for PA
HP jack outputs with Speakon and impedance selector (4 or 8ohm)
Power amp in
Preamp out
No effects loop

8 because I put a tuner output would have been welcome and can be a knob of the drive to smear her, but we can do that with the gain so it's not very serious.
Boost: its more aggressive with more mids

Super simple setup, plug and play as we like. The good sound comes directly after a warm-course (not 15-20 minutes as a SVT) 1to minutes to wake the bête.Je did connected on a Box of 15 "and 8 ohms. I eager to plug into 6X10 "HLF into 4 Ohms, it may well change the sound

Never had the manual but it is not essential and more can be downloaded from the manufacturer's website.

I play in a group of power rock, or what type of sound is perfect, I plug in either a stingray or a nickel and it's really JazzBass. Me I think that makes more passive bass, I feel that the active input attenuates perhaps too much, but this is only an impression, even when it sounds great.

With an active bass my settings are pretty neutral: gain at noon, bass and treble mids also j'équalize the preamp in my bass.
With a passive low as JazzBass, I just boost the bass (it's a maple neck, so the treble and mids stand out very well)
I always use the presence switch to boost the position, it gives more life.
I do not generally serve low and high switches ultras, I do not really serve
I love the sound of this amp in general, I'm a fan of grain Ampeg difficult to be objective. But the sound makes almost every style, there's nothing I téteste on this amp.

What I like is that it is an alternative to the SVT. Even his (+/-), but only 100 watts so it is forced to shake the walls or trigger nausea in drummer (and yet I do not put lots of bass!) To get the sound you want. And in weight, from 35 kgs to 25 kgs in trouble! finished to fart back to install the rig! (Except 6X10 ", but I will certainly sell it to buy more compact). The only unknown at this time is whether the power is sufficient: some seem to say that it is not enough, others say that non.La previous owner played alongside stacks and mesa 4X12 "and blamed it just a lack of reserve power.

I think I Mattra update when I tried it all on stage. Maybe is there way to mount lamps with an output level higher?

The value for money? know ... I traded against a SVT 2 not in super condition. The sound was a little better and more complete the settings, but I wanted an amp less cumbersome, less powerful and less expensive to maintain. I did not get out of money, so it's a good deal.

I would do without hesitation that choice, it sounds good, it's light, not too powerful, and it has more of the Geul.

I put 9, but without having tested conditions réelles.En any case it is a good alternative to SVT, certainly very interesting for recording (not too strong), it can plug into any box (8 or 4 Ohms) need not always come with its "mini" at every concert, as for SVT. I'm really pleased with this acquisition.