Add this product to
Ashdown PiBass
1/ 12 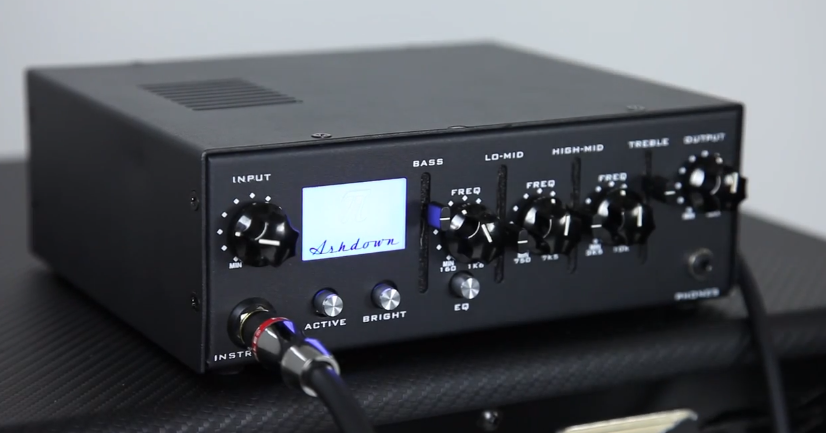 Ashdown Engineering's PiBass head is the signature model of Polish bass legend Wojtek Pilichowski. I tested it along with the Mi12, a cabinet featuring a 12" speaker. The two products combine to make a 240-watt stack that costs under $900, and has a total weight of under 42 lbs, so it's not hard to see why Audiofanzine pushed me to do this review.

Before I get into the details of the review, it’s useful to provide a little context about Ashdown itself.

Out of the ashes of Trace Elliot

Generally speaking, when a corporation buys an instrument or amp brand, things change drastically for the latter. And when, Kaman bought the English brand Trace Elliot in 1992, the staff of the purchased company quickly paid the consequences. Such was the case of Mark Gooday, an engineer who used to be manager at Trace and got kicked out in 1997 during a staff reduction. Since Mark has the DNA of an entrepreneur, he decided to bounce back that same year and make a secret dream of his come true: Create his own brand.

Ashdown Engineering was thus established. Mark decided to name the company after his wife’s maiden name and decided to manufacture high-end amps, soldered by hand in the UK, just like Trace Elliot in its heyday. The brand started growing and interested itself for new technologies. It found itself as the forerunner in the Class D race with the famous Superfly.

Ashdown then entered the entry-level market and outsourced the production to Asia, in order to attract a new clientele with more accessible products. Today, the company has sold more than a million amps to bass players and offers miniature systems with a reduced price, like the PiBass and MiBass.

The PiBass features a switchable semi-parametric EQ, an active/passive switch and a boost for the highs. In terms of connections, it has a jack input, a headphones output, a DI out and only one speaker out (in Speakon format). The control panel lacks the classic VU-meter that is usually featured on Ashdown amps. Nevertheless, you can benefit from a blue LED that illuminates the Wojtek logo (the π symbol), which indicates the status of the amp.

The PiBass and Mi12 are both manufactured in the People’s Republic of China. It’s obvious that with a 240-watt stack for less than $900, you can’t expect perfection. Sure enough, I noticed some finish problems right out of the box. In addition, the screws on the PiBass chassis weren’t tight enough and were slightly crooked. Did it get some service before reaching my hands? It’s possible.

I then observed that the switches were slightly crooked (see the pictures), that engaging them produced noise (mainly the Bright control and the EQ switch), and, to finish, the EQ bands felt quite fragile. For its part, the speaker comes off better: The Tolex wasn’t applied with the utmost precision, but there’s nothing to complain about. If the workers that assemble the gear and, especially, those in charge of fixing the grill, learned how to drive the screws in straight, it wouldn’t be that bad. While the price can certainly entice beginners, often less wealthy and more cautious about purchases than more established bassists, I doubt that a semi-parametric EQ is the most pertinent tool for a newbie. Getting a decent sound from a simple equalizer requires some knowledge, and doing the same with the EQ on the PiBass also demands some hands-on experience. Although a semi-parametric design allows for much more precise and fine adjustments, it can also be much more confusing for the user.

Besides, does a beginner really need that?

Even if Aristotle said, he who can do more, can do less, I’m inclined to say that anything superfluous won’t be of much help to beginners. However, I must also admit that I’m not a Greek philosopher, but neither did Aristotle play bass! And I should add that the action of the three knobs to sweep frequencies is not limited to the mid frequencies only. They also affect the higher and lower ends of the frequency range. EQing the signal becomes a sort of precision test. Every time you touch a semi-parametric control you need to readjust the high and low frequency ranges, and vice versa. I bet that more than one beginner will be disconcerted by the PiBass and its torpid settings. Despite my twenty years of experience playing bass, I was also a bit lost.

I had a real hard time getting sounds out of the stack during the listening session, so you’ll only be able to hear five examples (and my sincere apologies). I used my old JB Standard and a Beyerdynamic mic for the recordings, everything mixed with the DI signal on a Steinberg UR22 interface.

The first thing I noticed as soon as I plugged in was that the DI produced some noise, so I took the time to place the mic in such a way that it allowed me to lower the volume of the XLR output in the mix.

Second, with or without DI, the amp makes a lot of noise, especially the tweeter, which really ends up drilling your ears when you play on your own. It would be nice to be able to shut it off in the future with a simple volume control or a switch on the back of the speaker.

I won’t question the versatility of the system: I was able to get the roundness of a Bassman, the nice mids of an Ampeg and the dynamics of an SWR. But, boy, was it hard! Given that, I decided to look for simpler sounds, but it wasn’t easy. I know how to set a semi-parametric EQ, I’ve done it many times, even if my gear isn’t equipped with one. But these three knobs really gave me a hard time. I can’t imagine having to deal with such a system onstage. The first sample is a take with the EQ off, to give you a reference. On the second one, I repeated the same line using the EQ, but not the semi-parametric section. For the third take, which consists in a more swinging groove, I looked for a round but precise sound. This time I added the semi-parametric, like on all following examples. A bit of pick playing on the fourth (I couldn’t manage to make it crunch as I wanted), and finally a slap example.

I must admit that, for the price of the stack, the sounds it delivers are pretty varied. If you take the time to do it, you can really shape the signal and get a nice color out of it. But to reach that point you will first have to go through several stages, which I personally consider pretty arduous. They could’ve done it just as effectively, but made it simpler, which is something I hope for in the next PiBass version, if it ever exists.

Could have been better

If the manufacturer were to offer a simpler product with a better finish for a couple of bucks more, I would be the first to recommend it to beginners. Ashdown can and must do better than this first attempt, to be competitive in the low-cost-and-compact market segment. Its power, reduced size and attractive price are for real, but the PiBass nevertheless needs some improvements in terms of manufacturing quality and components.