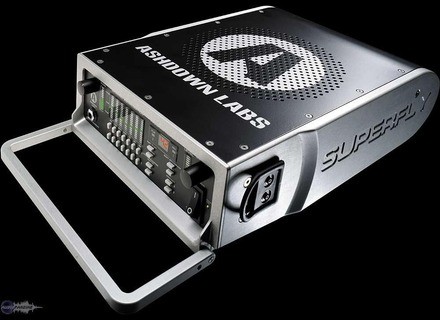 Ashdown Superfly 500 Head
5
The Superfly is a bass amp head that combines a preamplifier with a programmable digital power amplifier 2x250W into 4 Ohms (2x160W into 8 ohms announced by the technical service in Ashdown) all at a weight of ... 4.5kg! Amazing is not it?

The superfly comes with:
- + A bag strap to carry over the shoulder
- Two brackets allowing it to integrate a standard 19 "rack

In front, there is only one input jack (not active / passive ... but not really worth in fact!) And 2 pots for volume controls input and output. The sound setting is via a 7-band graphic equalizer with pads Up and Down to change the value of each band. The different values ​​of the sounds are stored in presets (89 changed) a LCD screen to display current preset with Pads Up and Down to switch between presets. There are also pads UP and Down to increase / decrease the compression ratio, as well as specific pads for direct editing of the presets (edit to edit, store to store, set to bypass the sound flat, and exit out Edit Mode)

On the rear panel, there was the power supply (typical), DI output with switch Pre / Post EQ, a possible connection to an effects loop (send / return jack in), output "line out" jack balance the sound on a PC or another amp, 2 output jack / Speakon combined for baffles. As compared to other heads, is the presence of a USB connector and a connector MIDI ...

In simple mode (read, branching from low in the head, connected to a speaker or two), the handling is very simple: one branch is lit, it works, that&#39;s it!

The manual clearly details the features of the beast. In all cases, the signs on the front are so involved that you can not crash!

More seriously, the VU meters and the graphic equalizer to allow a snap to get a snapshot of the type of sound on which one is playing. The 20 factory presets Portray and offer a wide range of different sounds for all styles. The answer is a direct change on a pad: mean by that as digital settings (whether on the EQ or compression ratio) are significant on the sound!

Clearly, we can, "scanning" the factory presets without taking his head to tweak the settings, found in less than 5 minutes sounds more usable!

I did test the effects loop with an old Zoom 506 bass: nothing to report in particular: the different effects even pushed to their maximum, are perfectly replicated (chorus, phaser or flanger ...)

In "more complicated", there is an additional preparatory phase:
- Go to the website of Ashdown http://www.ashdownmusic.com/bass/detail.asp?ID=156
- Download driver, editing software for windows (not tested with an emulator on Linux)
- Launch the Superfly

And there is happiness: click "connect" and it is the beginning of the journey where you will be able to select:
- For each band, its bandwidth
- Input gain, each level of band (in addition, it is like a tree Noyel: you move something with your mouse, it varies the LED of the graphic eq on the front of superfly!)
- For compression, advanced settings of threshold (threshold comrpession) ratio (compression ratio), attack (time before which the compression starts) and release (hold time compression)

In other words, there must be traffic and traffic and more traffic all the possibilities ... Finally, you can strictly get all the sounds you want!

A negative (and I think it will be the only one): I think the superfly tends to "heat" ... Technical support assured me that there is no problem with that, but I&#39;m going to break it down in a "house"

The sound of Superfly? One word comes to mind: "bluffing"

As I said earlier, the editing on the camera settings can already more than satisfactory. His critics say that its certainly going to be cold and devoid of heat: it is not! Without comparing (of course) with a tube amp, you come to get her a roundness and warmth "quasi" natural!

Slappeur before the Lord, the settings in "mid-cut" with a compression to the body are worked real killing, an incredible power, the slaps growling like thunder, sounding pops without slamming.

By calming the bass and treble and acting on the media (the editor via PC including bandwidth is an incredible tool in this regard), without compression, there is a much more jazzy, to bring out of impeccable harmonic than I suspected it be. Provided that the lower back, you come to find incredible heat.

Coupons anything but low, and if you love Dub, you kiffer: I play on a home B2005 ESP / LTD 4-string BEAD granted ... Nothing to say: If serious purrs like a lion! What happiness!

An item not tested: the MIDI. This one you used to connect any MIDI pedal to switch between sounds. The publisher also via PC has a feature to associate a preset to a channel midi ... It sounds stupid (and, frankly, I think it is too!

the price of a box of live 21 or EBS at Tech ... It was mainly the idea that I had done: get, for the same price, a more sophisticated direct box, preamp with a killer, all for less than 5 kg ...

The "normal" price is around the € 860 I think ... For the price I have received, of course, one can even speak of "good" value for money, is beyond all that! That said, remember that EBS Micro Bass II (excellent passing ...) already costs in € 350 and that for that price you will ... DIBox and a few settings ...

It should be noted however that Ashdown released a series of baffles all "Superfly" in which Neo (they) are quite expensive ... Anyway, in all honesty, I use my superfly baffles in "house" or a peavey 115 of 350W/4Ohm ... ca is already doing serious!

No, laugh when the girls see you with your land B2005 (to look very metal) and your superfly (look at the very gadget) will be in two fingers of your throwing beer cans at the figure ... when they have heard the range sound and feel of all that, they rip your saps!

Anyway, my friends "rockers" fan of Gibson and Vox are completely amazed!