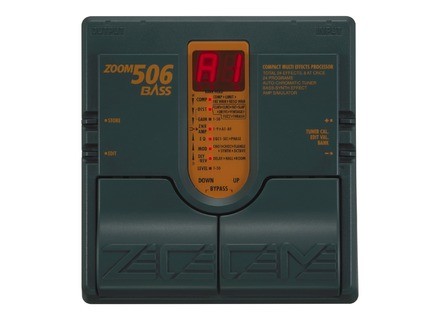 Zoom 506 Bass
5
I purchased this pedal new from Counce Bros. Music in Muscle Shoals, AL. about two years ago for roughly $150.00 (before the prices went down). I needed an effects unit that was flexible, and cheap in price so if a beer got spilled in it, I wouldn't feel the need to kill a drunken redneck.

I like having all these effects at my feet, in one unit. Being a bass player, I don't have the need to run more than one or two effects at a time, so noise really isn't a problem. The Zoom 506 Bass has a great octave effect, the chorus is nice, and when I use the envelope filter in conjunction with a little fuzz, it replicates my old BassBalls pedal nicely. As far as reliability, I have filled it full of sand from playing gigs on the beach, club-owners dogs have taken massive pisses on it, and yes, beer has been spilled in it (the redneck lived, btw). Still cranking out the sounds after several cleanings.

The only complaint I could have about the Zoom 506 Bass is when I have tried to run several effects at once, there is an ever-present noise that is almost as loud as the original signal. As I stated earlier, this isn't a real-world problem that I have to deal with.

The whole unit is plastic, but is still half-way sturdy. Unless your performance includes standing on your effects pedal while doing a ballarina twirl as your high-heel spiked army boots are in flames, you shouldn't have a problem. Effects quality is very high, especially considering the cost of the unit.

Great sounds, lots of effects to choose from, all at good to great quality, cheap in price, and should last a long time. When this one finally dies, I will replace it with one just like it, or the updated version.

Zoom 506 Bass
2
I bought zoom 506 in a local store near my house for the price of $100, I think, I can't be too sure on the price. I bought it mostly because of his price compared with the ones on single efects pedals, and I was just a begginer

The zoom 506 has a considerable number of efects, the most common are all there, and throught that we can achieve some really nice sounds from the box. It's very light and small, basically very easy to carry. Another thing is that it is very very easy to use, in about one day you become very at ease with machine.

It has big, and I mean really big, problems with noise, so much that the things that I liked about zoom 506 goes down the drain. When we use compressor or limiter you can forget about sound quality, there's nothing to do, it just doesn't go away. Another thing is that we don't have parameters within the efects, so you don't have a lot of space to play around with. The equalizer is very limited and changing banks on live gigs is a very risky work.

It's very well built with exception of the buttons on the sides that get stuck very easily. I bought zoom 506 about 4 years ago and it still works without any problem, I never had a malfunction.

I recommend zoom 506 only for begginers, to get at ease playing whit efects, zoom 506 certainly does the job. It's very easy to use and you can make really nice sounds with it, the big problem it's his noise, it becomes your worst nightmare. for it's price there's nothing better.

The quality of most of the effects is excellent and there is a large variety of effects to choose from. The effects are easily accessible from the two large pedals on the front. the effects can be switched into any order the user wishes to use them in so as to ease access. Also every aspect of each effect can be adapted and changed by the user to suit their individual specific needs. The unit also comes equipped with an easy to use tuner which you can access by pressing both the pedals simultaneously.

One of the only problems with this unit is getting a good quality of distortion. The main problem is that you cannot get the sound to be distorted and also retain enough of the original sound at the same time.

The construction of the unit is satisfactory providing a good balance between size, in that it is more or less pocket size, and ease of access.

All in all the Zoom 506II is a very good bass pedal for any budding bass guitarists and professionals. It incorporates all the qualities of the single function BOSS effects pedals and a fraction of the price and size

Zoom 506 Bass
4
I got my zoom 506 bass pedal at keparts in Decorah IA, one of my friends got a pedal that was a little different but this one looked close enough and like fun so I got it.

I like that is has lots of effects and other things like a tuner, the tuner makes it alot easier to tune to drop D.

The thing that I don't like is that it is realy hard to figure out how to run the pedal without a manual. I am having trouble changing the pre settings on it and getting the different sounds out of it.

The construction and quality of this unit are good it is durable and so far since i have had it it hasn't broken so it has to be better then alot of other stuff I have gotten for my guitar.

I think this is a good product for beginers to get. You want to make sure that you get a manual with it. After you figure it out it is a veary fun toy.

This review was originally published on http://www.musicgearreview.com
Did you find this review helpful?yesno
»
Read the 9 user reviews on the Zoom 506 Bass »

Zoom 506 Bass manuals and other files