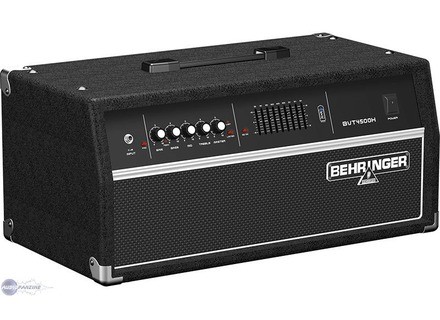 Behringer Ultrabass BVT4500H
4
amplifying transistors
jack connectors, speakon
power of 450 watts into 4 ohms (300 instead but this is enough)

config simple, no need manual
you can go heavy on Mtal without any problems
in rpet, half volume and it rolls

I use it for six months because before I had a marshall b state and I found the sound too crystalline despite the rglages so for the price I ssay and I t agr ably surpris.CE I like least: the bulk of this head, heavy and especially mga impressive especially when you have to carry it, but what do you expect for that price, you can not have everything.
I recommend for the budget, we can have fun without breaking the bank.
I turn a Superior range but this head will stay in my studio.
Very happy with my choice and I think if the opportunity reprsentait, I would do this choice
Did you find this review helpful?yesno
»

Bullterrier's review (This content has been automatically translated from French)" The anti-crisis weapon?"

Behringer Ultrabass BVT4500H
I share a lot of things with the advice given on this head of amp, but after a lot of repeated trial and concerts, I would like to clarify:
this head is powerful but not issued (I think) that 225 watts RMS into 4 ohms, do not worry no problem for this voice! power of 450 watts is also a power peak (peak) recognized by Behringer (see website). This head is perfect for a BIG ROCK SOUND, it reminds me very much a head AMPEG SVT 350 transistor. The value for money is REMARKABLE although its knobs are FRAGILE and poorly spaced, and the sliders of the equalizer which are junk .. Try this head on a low cabinet AMPEG 500 Watts into 4 ohms (410 hlf) and you will become addicted to this Chinese head (sorry, Germano-Chinese).

Round his large and well GRAS

6 months, the head of emergency is to discover what disappears soon before the catalog

Grenouillère's review (This content has been automatically translated from French)

Behringer Ultrabass BVT4500H
5
Sufficient power!? 450 w Well I think it is enough to explain? Let&#39;s say for an idea ... The gain to 5, the volume is at a maximum at home and 2/10 by repeating! And with one cabinet at 8 ohms! So with two 8 ohm speakers in you get a weapon of destruction "bassistique"! No worries of raw power: I compared with my other Ampeg head, given to 350 W and 250 W into 8 ohms: the behringer literally buried in terms of power and sound! I think it is quiet in all situations of standard games (the repetition of the open stage!).
For what type of use? All! Well, for the settings, it has a gain and volume, a classical equation: Bass / mid / treble ... On it is added a 9-band parametric equalizer! So with that if you can not find your sound! In addition to the EQ mods are very effective! Personally I put the 9-band "V" with a lot of classical bassists! Ie: lots of bass and treble! Then I adjust the three central buttons to shape the type of sound that I want: heavier, I climb the bass, more slam I send more acute, if I want a sound very 70&#39;s, I go mediums, etc. ... this amp is really versatile, but he keeps his very "warm" compared to modern amps Switching (markbass, Ibanez, Ampeg, Fender ...). For connectors: two HP ports in jack + 1 we speak! an ID (with pre and post equa please!), an output "tuner", effect send and return, etc. ... In short ultra complete!

The special feature of this amp: it&#39;s all transistor, but with a simulated "VTC" lamps (like the famous Ampeg SVT 450 from home!). How to tell? This is brilliant! It&#39;s like having a tube head but with the risk, fragility and less and especially an unbeatable price! Having tried the "real" Ampeg few years ago, this is exactly the same! That&#39;s what killed me ... For 80 € (it is in promotion now on a site of VPC!) You have the sound of the Ampeg SVT at 800 €! So ... Besides I already have a head ampeg "modern", I did not need, but when I saw the price, I did not hesitate!
For those who think that Behringer is the M ****, God bless them! That&#39;s a lot more for us! You should know that this brand is the copy for many years, and honestly, I must say I am amazed by the quality of their equipment. I have other brand products and sincerely: Cheap, high quality and reliable! So ... Today in Ampeg SVT heads are made in vietnam ... Nothing to do with the made in U.S.! lol
It&#39;s funny I see more and more friends zicos equip themselves Behringer! And sincerely look around you! I think it was worth the money and very often some very good surprises! (I have some very funny anecdotes about the SAV Fender interested in some if it! For a brand supposed to be a must! Died of laughter!)

The config is simple: a parametric equation 3 band of 12 + bands I think. Simple, effective: two jack speaker outputs, an output is Speak, an effects loop, a DI, etc ... Short! the full in full!

The right sound: if you love the sounds powerful, heavy, the Ampeg ... Well that&#39;s right for you!

The sound: Ah .... In short, I (and I had ...) more modern heads (ashdown, markbass, ampeg, trace elliot, fender ...), combos ... I bought the Behringer on a whim (I thought at 80 € for 450 w I may not much!).
Well eventually she became my main head. It replaces my beloved Ampeg head!). The sound is really "hot" without distorting the sound of your bass. We really like playing on a tube amp! Sensation and made it really impressive!
It&#39;s punchy, round, groovy, hot, languorous ... Switch from one amp cutting that&#39;s incredible! As if you swap to a twingo limousine. It has a beautiful sound "hot" and especially a huge reserve of power! The mods that are done on the equation really changes the sound and brings a je ne sais quoi about the selected frequency band. I tried with several low: one active, one passive, one vintage. In fact the sound of the bass is respected, but it seems to have a sweetness, a warmth in the notes that are played. Dragging left the notes becomes just "kiffant" ... This is the amp to the essence of the bass. Unlike a TC electronic or markbass, the sound really makes you want to groove, letting his music breathe. It is in the game to motown, reggae, heavy and hot, "oozing" some say ...
Frankly the sound: I love No Limit ...

The ratio Q / P? 450 W for 80 € ==> indecent! What convinced me to buy it? The price at the start! Product quality that I had the mark for me or my group (the speakers that we have just acquired a killer!), The memory of a true "SVT" is a lease try it .. .
So the least: THE WEIGHT! It is true that this is the downside! about 20 kgs! It&#39;s heavy it&#39;s true ... As a classic combo even less! But for an amp head that weighs! And yet I have a head of 3.5 kgs available in its cover! But not because once you have tested it! hihihi ... Prévoyer some muscle before playing. If you make 1.80 m and 40 kgs, you go drooling! Furthermore it is "imposing". as the original: the dimensions of semi trailer! Rather for those who have a vehicle to get around ... Because the bus is going to curse you! If not for the rest RAS!
Most: the ITS, connectivity, simplicity, the look (you remove the logo and you have an Ampeg SVT 450!), Strength (it seems indestructible!), The "limit" that avoids burn out the speakers, the equa very effective and detachable, titanic power ...
Of course I rechoisirais the same! But I would have bought it sooner if I had known! At the price I paid I did Ze deal!
In hindsight, I resigned to where Mr. seller?
I recommend: At any bass player who dreams of an Ampeg head that sounds without paying the price (and who cares nothing for the real name of the head as long as it sounds!) ... ! Of course this is not a "real" all-tube Ampeg type "fridge" for 70 years! But frankly you risk to be very surprised! For the bass player who wants to "sound" but also has a family, friends, a car, house, children, ... In short a life next!
PS: Malheureusment at this price all the heads have been sold! But even in the € 200 it seems to me a great deal!