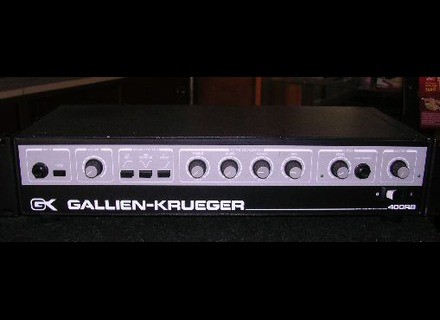 First off, I have a confession to make- this is my SECOND 400RB! I've been running one in my two channel bass rig for the last 3 years or so. When my Peavey preamp died and took a my power amp with it, I decided to look out for another 400RB. There had been one sitting in a local music store that I frequent, and I'd been keeping my eye on it, hoping that for some weird reason, I'd be able to just buy it and be done with all the fussing around.

Now on to the formal review part! As I mentioned, I'd already been using a 400RB in the bridge pickup side of my rig (remember its a dual channel setup- with the bridge PU going to one amp and the neck PU going to another). While most people I know get the best results running this amp at 4 ohms, I'm only had the chance to use it at 8 ohms through my SWR 4x10. During a recent gig, I found that I had JUST enough power to be level (volume-wise) with my two guitarists (one uses a Marshall Valvestate with a Fender 4x12, the other uses a Fender an original '65 Twin Reverb), sans Peavey and power amp (I ran the rig mono that night). Adding this extra amp (and thus going back to dual channel) was a Godsend! I have all the clarity and serious tone that GK is famous for and the ability to actually lift my rack at the end of a gig (it weighed over 80Lbs before dumping the pre/power combo!). I haven't run out of power yet. Even on the biggest stages I've played, there is always enough "cut" to be heard.

There are two minor beefs about this amp, but they are MINOR!

1. In order to get the most volume out of this amp, you MUST run a 4 ohm cabinet. I noticed that my SWR 4x10 sounds a little more "polite" than my custom built 2x10 (using the same drivers, but totalling 4 ohms). my main goal was to lighten up the rig and have it actually fit in my car! If I added another SWR 4x10 to the rig, I'd have to buy a bigger car!

2. The effects loop is POST EQ, meaning that if you use a compressor in the effects loop (like I do), then ANY changes in boost or cut will affect the action of the compressor. This can actually make your frequency extremes "dissappear" if you don't adjust everything accordingly. Luckily, I was able to set everything and then just forget about it. I don't tweak my EQ around that much anyway.

These babies (or "the twins", as the band now refers to them!) are as bullet proof as they come! I haven't had a single problem with them.

Well, thats not entirely true! I did have an overheating issue after I had the amp for about a week or two. I was playing in a rather fast and furious hardcore punk outfit at the time and the amp kept cutting out after every ten minutes or so during our first show. This gradually got worse as the night wore on until I finally just listened to my sound through the house PA system for the whole third set.

This was remedied when I had the amp opened the next day for the rituallistic cleaning of the control knobs (do it EVERY 3 months if you play at least one show/rehearsal a week- for ANY gear- basses, amps, effects!). The nuts and bolts that held all of the big output transistors to the heatsink were all loose! Simply tightening this solved the problem. I've never had that happen again, but the heatsink gets MIGHTY hot after an hour of playing. And I'm talking tube amp-like hot! Not enough to burn, but your hands will get VERY uncomfortable if you lave them on the heatsink too long after a good jam session!
I will be installing a fan in the back of my rack, ASAP!

paco256's review (This content has been automatically translated from French)" Indestructible!"

The configuration is all that is simple. All this corresponds to the standard bass amps in this range.
I've never used the manual is so simple.
There are no buttons fifty miles so it's easy.
Is obtained quickly and easily sound you're looking over it complies with the sound of the instrument.

I use it in completely different styles (blues, rock, hard rock, Irish and Breton) with different basses (L2500, Mex Jazz bass 5 string, ibanez roadster) and what that we do, it works.
We spend much of their fat in their super crisp and clear by turning two knobs.
I used it with different cabinets (4X10 Marshall, EV B215M and now SVT 4X10 HLF): passing from one to another, you get a different grain. I rediscovered the head with the 410 ampeg.
This head is extremely versatile 200W andTHE announced are really there!

I use it since almost 10 years and I've never had the slightest technical problem. The sound is a versatile big asset. (Some accuse it a "lack of personality").
The only criticism I would make the lack of heat due to the absence of light. (This is because we need to find a fault!)
I count him graft a tube preamp to remedy the problem.
The price / quality ratio is excellent. (There is an occasion for around 300 euros)
In conclusion, this head is indestructible, it sounds and sends it right, the settings are easy to handle and if it couples with the right speaker was very quickly that his research.
It is too little known for my taste and I do it again without hesitation the same choice.