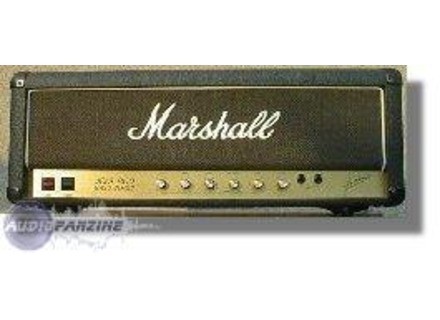 dredou's review (This content has been automatically translated from French)

When you read a 100W bass amp we tend to think it's a bit limited, but here it is a true all-tube amplifier stage, the power is really there ... not need to grow beyond 5 even in very large scenes.

It has two inputs that can be used simultaneously, a bass knob, a treble and a parametric equalizer middle through which one can choose a frequency between 400Hz and 1KHz (button "mid sweep") and adjust the volume (middle button) . This amp also has a knob "slope" that can filter the fundamental bases for a specific and slamming her.
At the back I found out two 1 / 4 ¨, a DI, an impedance selector 4.8 and 16 ohm and a 120/230 V switch (useful if you go to other countries).

This amp has features simple but highly effective, it is for people like me who do not like to take the lead with 50,000 buttons while being able to shape the sound at will. The knobs are very effective, you just rely on his ears to the "slope" because it is not a usual setting, but which totally changes the sound according to how it is used.

We get easily a good sound, the key words being "warm" and "roundness". We feel the work lights, sound and just great for bass players who like to like me well rounded.

This amp appears to play great reggae, jazz and rock. Slightly less in terms of more current music like metal, if we look a the "metallic" and aggressive, whatever if you like the sound of Robert Trujillo and Rex pantera there is no problem c ' is entirely possible.

I own several basses including a Fender fretless jazz bass that sounds great on this amp and a Warwick Thumb 5-string that has a great slap sound. I play on 4 speakers * AMPEG 10HLF perfectly reflecting the low of the head (and it really).

I love the tones in the bass (reggae, dub ...) for which this amp is really terrible for the slap we get easily a well slamming. I do not play with a pick so I can not tell you if it sounds at this level ...

I use it for 7 years and I never had no problems with it began to pat the fuses that have blown up once when the lights were too old (I did changed twice since I have this amp) .

What I like least is the weight of the head, I do not know how she does exactly but it is quite heavy as to tire me very quickly.

I bought it new and I had the opportunity to compare in-store with several other heads, Hartke (even bother to compare them so it's night and day level warmth and body) of swr which lacked severely low in comparison to the head, the only amp that was comparable to me was an Ampeg SVT 2PRO, I have also hesitated between the two, I finally told myself that the 300W Ampeg were really seen too much power that I have to 100W and above the cost of relamping the ampeg would have been too large in comparison to that of the JCM 800.

If I had to choose again I probably do it again, this is a head that I love her and followed me all these years without ever having had any problems. Of course we must be careful though, it's all lights and it is difficult, but against it is a product of high quality and very reliable.
I play bass on the head, but it is a particularly popular mind by guitarists seeking a "vintage".