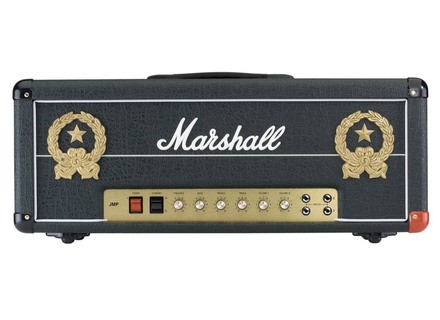 Marshall 1992LEM Lemmy Kilmister Super Bass Signature
5
Marshall has done a lot of things right in their day and that have propelled them to the top of the haystack when it comes to amplifiers. NOw a days they have been putting out garbage after garbage. Take for example the Slash amp. That thing sound like uter garbage! This amp they worked on and had all this hype propped up and then people got it home and say what the heck is this thing. Some of these amps for signature guys work and some don't' the Kerry King amp is anther example of trash sold on the shelve. This guy is a good player and huge pompous ass as well, and his ugly looking mug matches the ugly tone that comes from his sig amp. His amp is worth about what is cost to go see them live and that is nothing.

This amp has got tit going on. Granted is is in the bass section but lest face it this is a guitar player's amp that a guy ...Lemmy modified himself and plays his bass through it. His tone is just awesome and one of the best bass rock tones in the world.

This amp is getting a 10 straight across the board because Motorhead is fantastic. his voice is garbage abut his amp tone is just stellar. If you have ever heard him live or a recording you would know that has tone is really what carries this band. The guitar tone is nothing short of great too, but what I think about when I hear these guys is that killer rocking bass tones. You get a huge saturation is the gain and that really comes from the guitar amp circuit. This is essential a guitar player's amp. If you want heavy thick fat bass tones then this may be your amp. But lets face it you probably aren't going to buy this amp unless you are a fan of Lemmy or of Motorhead. This appeals to those guys and those guys only. You can get a lot of other cool bass amps that have a lot more versatility and angle towards bass players.

At new you can get this amp all day long for right at around $2999. A little much for a bass amp I would admit but this thing sounds fantastic. That is a bit steep but hey you got to pay the man for his signature head too. I would recommend this if you are a rocker and want your bass tone to just slay. This is a circuit from a guitar player so you will get some tube saturation and breakup. So if you want to play clean I would recommend a lot of other amps besides this one.
Did you find this review helpful?yesno
»

Marshall 1992LEM Lemmy Kilmister Super Bass Signature
5
To honor the long collaboration between Marshall and singer / bassist of Motörhead, Lemmy Kilmister, the Marshall team has created this Signature head, which draws its inspiration from the head modified by Lemmy himself, the "1992 100W Super Bass", named "Murder One"!

The result is an amplifier that delivers superb sound, a huge volume and crushing power ... and all that stuff in a very heavy duty head!

To ensure that the final product is the same as the original, in terms of sound and tone, the Marshall team has worked hard to find the origins of components from manufacturers.

The circuit of 1992LEM has still been amended to create a hybrid head, the mixing characteristic of the 1992 Super Bass with elements of the Super Lead, allowing 1992LEM benefit from a deep tone and a incredible!

Changes made to the circuit will allow you to you, the bass player, to get a clearer sound, while retaining the brutality of a 1992 model unmodified.

The power stage is built around four EL34 tubes to produce a huge volume of 100W!

Marshall also took care to pay attention to detail! An edge protector "Red" was specially made for this head so it looks like two drops of water to the original. And still more to paste the image of "Murder One", two laurel wreaths Aluminum gold were added to both sides of the Marshall logo!

And to push the finish still further, a carrying handle and chrome buttons were added. All this to continue the long tradition of excellence Marshall.

And if you have one of these terrible head was not enough, each 1992LEM comes with a certificate signed by Dr. Jim Marshall and Lemmy himself, plus 3 picks, which are identical to those of the legend Motörhead!

Simple configuration, 6 knobs, 2 volume, one can not be simpler.

The manual is very clear, not so much need to read the bottom.

Are lit, heated and allowed it sounds!

Suffice to say that it sends!

The sound is rather dry, very dynamic and not super clean. In short, big sound lamps.

By playing on volumes (and a special Lemmy Traditional) moving from one medium to its relatively sound downright serious doing everything in the room vibrate.

I tested a dozen head before stopping on this one.

The only two criticisms are the weight and price.

For the rest it's big, it sounds, it grows, that drive, the heavy: D