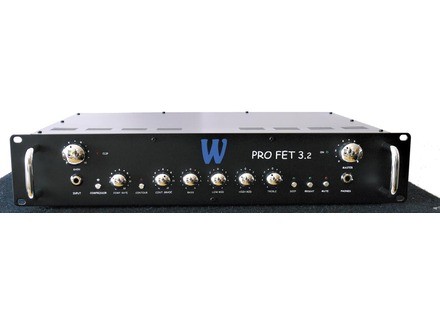 mordibass's review (This content has been automatically translated from French)

Jack and Speakon connectors, Line Out

This head amp is very simple to use, in a jiffy, you come find her enjoyable and powerful enough.

Some knobs (compression stroke) are serrated, which gives less precision my taste, but lets you know exactly what level rglage said.

Boosts the bass and treble are interesting for those who have a passive bass, because they get a low-power control, without saturation ... was used sparingly with a low force (to balance the gain to avoid "clipping")
The legalization of knobs do their job, everyone does well on its range of frequency drives Manir Whereas ... it&#39;s when you get a particular sound (harmonic sounds, sound fretless solos, sounds reggae / dub, slap sounds, sound mdiator ...)

To my taste, I prefer the graphic EQ which are much more and do not prcises frquences in one knob ... APRS is my opinion, but look the other way, the knobs of equalo are effective. You can of course be coupled to a equalo pedals for even more precision. Especially with a 5-string or bass hum a lot, and mritent more attention!

Another point for low active work between the legalization of the lower and that of the amp is making, history to find a good compromise between the global (that of the amp) and its control ( that of the bass) ... this will be effective in concert without having to fiddle with the EQ is all over the place (and that you avoid becoming the worst enemy of your ing her!)

As for the manual ... bin it provides no more precision than can be seen directly on the head ... it will serve mainly to nophytes who have no knowledge of standard amplification, and more ... they will learn a cheaper via the net.

Being given that I play in several groups with completely different, the head may be more or less enjoyable one style to another (especially in concert must be very careful)
In Mtal, it is quite powerful and follows the rest (unless your drummer is hyperactive and your guitarist is mgalo and forth to get the wall Kirk Hammett amp!)

In Funk, the slaps are enjoyable and trs crystalline (almost too with new ropes!) And the passage of the finger slap occurs naturally and without volume loss (APRS is you manage your attack ,-p)

For all that is Rock, Pop, variation on, because it is versatile enough extra casually

For the Jazz, it is enjoyable but it will rev your work by repeating its&#39; about the results to optimal on the set prcis ... especially harmonic and fretless! But prferez a head lamp or hybrid for that style.

Otherwise I play bass with 4: 2 four strings, a fretless, five-string and 1 (all active in dbrayables passive), and they are all well with the road.
Level because it accepts all: fuzz, flanger, chorus, delay, any how! ... if there&#39;s a concern, check over your pedals level (quality connectors, legalization) than at the head (or the limit, make a balance between head / bass / effect )

The sound is still quite "cold" (normal for the transistor tell me) but not extreme either, you get manage to force a fiddle with the settings and find something in the style that we play or the instrument with which we play.

In the studio, it largely follows ptites for models and other self-produced albums, it will take the road and essentially no buzz, no breath ... the rest will be reworked in the mix.

I use it for roughly 1 year, she serves more as a head replacement when I do not want to hang out all the heavy stuff (especially for caf&#39;con &#39

but remains stable even trs on large scnes background music. You&#39;ll have no problem of "buzz" through the DI (and if y &#39;is one, the ground lift switches ... oula, it makes the odd English word!)

I find this very versatile head and arrive easily find happiness with ...
The only shortcoming for me is the lack of graphics and legalization "personnalitquot, but this does not detract from the effectiveness ... if you do not have requirements of professionals, it will go o You want it to go!

I think the head is perfect for the average musician (no beginners or pro) because it can start a busted ptites the futility of a head amp (APRS s&#39; be done on a small finger combo base and have acquire the fundamentals of the amplification), it will be understood by repeating and non sonoriss lives, it will not cause problems with Ings its stable and will remain on scnes big sound system (excellent return in the return)

At present, I rpond has other requirements, so it does not have much to bring me, but if I had to make a return to rear, I do it again without this choice hsiter qualitprix because the report is truly unbeatable and provides a reliable amp head and trs good quality without breaking the bank

Duge's review (This content has been automatically translated from French)

This head, we often read and especially here, is simple to use.
I think it's a real advantage because correction deviate too quickly to the gas plant.
Eden with upscale such!

Quality potentiometers is good, both to the touch and effectiveness.
Only default setting in the dark difficult because no identification or notch on all knobs.

The sounds are true to his envoy in the amp without modification or extra grain. Love the warm sound American, go your way.
However, with a tube preamp or amp simulator type Bass POD XT ...
For my part, it is combined with WCA 411 Pro 600w brand.
The tweeter adjustment allows you to play sounds without ostentation to "Hartke" quickly tiring for everyone (even the bass player.
Compromise is very efficient and provides a big sound pressure.
Adding a 15 "is recommended to increase its size.
I play everything with a Jazz Bass neck mapple and funk as well as Marcus in medium to Pasto found his happiness.

I use it for a few days as an adjunct and admits to being somewhat satisfied.
The purchase is not expensive, especially on sites like Thomann (bundle amp + speaker) which delivers a 10zaine days a serious amp that could be compared to BMW motorcycles.
No frills but a professional to run all day in safety.