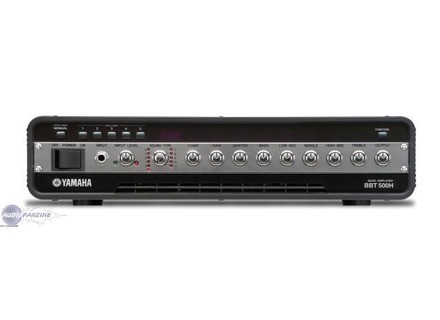 Yamaha BBT 500H
1
Tell you about my history as a musician? what do I play with? how long is it? Eh! what the hells it got to do with you, you boneheads.

Think the professor off futurama.

Bought for £369 approx 6 months ago from soundslive.co.uk - £370.50 with next day delivery. Polite prompt no bullshit service, check out their prices on line, will more than likely buy from again, prices only matched by GAK.co.uk.

Probably the best modeling amp I`ve heard, recommended by a pro musician working in one of the larger music retail chains - he was correct its a superb unit. Specs can be picked up from the mentioned shop/sites but check out some of the sounds : `modern` = it IS a trace elliot amp - why bother with the real thing?, `r&b` = whoa baaaby sleazbag smoooth, `classic/heavy` = Its an AMPEG!, `flat` = see how good your bass really sounds, `tube` = as flat but a little growl/warmth, `solid state` = a lovely H&H musician type sound. I normally avoid an amp with a compressor and/or limiter built in like a kick in the testicles but the bbt has both which can be turned off or tweaked as desired, The factory settings are wonderful and I actually now use a little compression and if things get really loud switch in the limiter on the rear of the unit.
It is easy to geat some fantastically evil sounds and store them as user patches.

Dislikes = wasting two of the presets on `distortion` and `fuzz`, what a bloody row, distortion sounds like a frazzled horn/speaker is about to pack in and fuzz an incredibly crap sounding early seventies shin-hi fuzz box. Why oh why?!!
Only five user sounds isn`t enough, unfortunatly I use three basses - a warwick 5 string, custom made 6-string and custom made 4-string. If you own/gig with one bass no problem, but after adjusting the settings to suit your other bass(es) either for recording or live and things can become a little crowded.

Consyruction/build is top quality which I expect from yamaha.

Unless you run the amp at 2Ohms (2 x 4 Ohm cabs or 4 x 8 Ohm cabs) you will probably be using two 8 Ohm cabs as I am which gives the amp an output of 250w, you will need to bump the EQ up to get the volume to an acceptable gigging level. It isn`t the loudest amp in the world unless it is running at its optimum 2 Ohms.
I`m very happy with this unit and can forgive its few design drawbacks - as a bonus it has a speaker simulator built in for studio use.