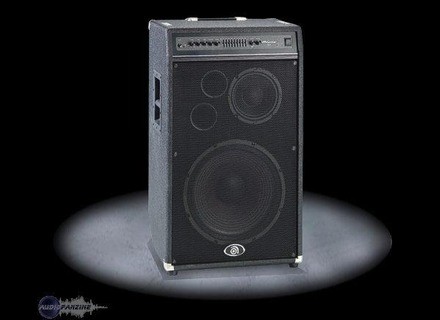 Ampeg B-3158
5
I bought this about 3 months ago, I simply looked into an ampeg due to likes of the company, and its good name and products. I dropped $500 on it. I got this at a local music store (Daddys).

I have found that it has a huge varieties of sounds and tones, lots of stuff to screw around with, It just has a great sound all around

Its size, its pretty big and weighs 85 pounds, but with 2 speakers and 150 watts, I cant really complain

Flawless, except I bought it used, so it had some dings, but the sound, and features are great

Great amp, I would buy it again if it were a tad bigger, but it will last me a while

monito666667's review (This content has been automatically translated from French)

The configuration is simple and gives the sound that you want in minutes ... no worries.
The manual is not very long but just enough ... After all, this is a bass amp!!

Let's talk about her now:
In fact, I use several. I am in a group of Rock-Alternative (trend when even a little heavy ..) and I admit that the sound Integrates perfectly with a big fat guitar well or other well-sche (all in distortion of course). The rglages can really put the bass in the obviousness or not, as desired.
I also use it in my studio and my music lctronique ... in fact, it offers low much more dynamic than any stuff that I (or GrooveBox Nova), and the sound is really a good mix (used with a good condenser microphone ... I admit that the shuffled surprises me every day).
I admit that at times the bass is too powerful ... is it a default? I do not think ...

I use it for a little over a year now and I confess I'm really happy.
What I like most is the ease with which one can arrive at its ultimate.
I tried other models of types (Peavey and Carvin), but it really is more fun.

If I had to buy a bass amp, I would do the same choice without hsiter ... really, nothing wrong!
Did you find this review helpful?yesno
»