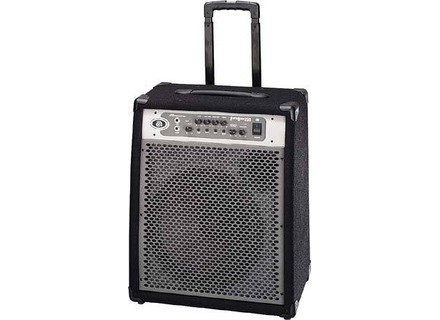 Ampeg PBC-2112
1
Been playing over 30 years. Some pro/paid time years ago. Back into lately since my son is now active and pulls me along. Play classic rock, southern blues, R&B.

I bought this on eaby, I can't stop even though 80% of the deals I get end up being junk! I bought it advertised as NEW. It ended up being a dealer hiding as a seller. They sent me a demo floor model with issues. I sent them $490 plus $55 shipping!!!

The only good I see is that it is small and easy to move. It appears to be able to take some work time, being moved around and getting thrown into a van often.

It sounds terrible! I am VERY depressed with what I hear. The tone is empty below half power then the speaker shifts into mud mode once you try to get the volume up over the TV. It buzzes, rattles and humms from everywhere, even with the handle off. The horn has no response. It really sounds like a cheap amp and when they were asking $979 I thought Ampeg had a secret weapon, it turned out to be a dud. The dealer didn't help either selling this as new. Maybe it just got abused in the store and shouldn't sound this bad but I think not. Don't touch the speaker magnet after playing 20 minutes. It is so hot it can make toast and puts out a nasty smell...

It seems to be strong. Only had it 4 hours though. It lacks in beauty. Pretty cheesy looking. The head looks nice but the cab is really lame.

VERY disappointed. Ampeg really lost it on this one. I guess that is why the searchs are showing the real stores list them as discontinued, and some are hiding on ebay selling them with no support, just a big SORRY. Go for the B 100R. It is cheaper, sounds better and way cooler looking. I hope I can sell this for half after getting depressed playing it for a few months.