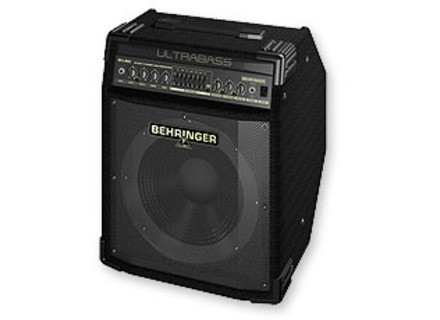 Behringer Ultrabass BXL1800
3
male,46,playing in a pub/top 40 rock band(pays the bills)for 3yrs.love blues prog/rock metal as well as jazz,classical,folk.play guitar but play bass in the band.been playing since i was about 10,some classical guitar training but best lesson was throwing on a record and jamming with it.

had a peavey tko 115 that was getting death rattles and was heavy to move.attracted to the behringer because of price,compact size and also own several of their products.ordered at local music shop paid $500.

I liked the compact size,wedge shape(helps me moniter myself better due to some industrial deafness)and features.DI output is handy to run into mixing desk for bigger gigs for broader sound.we have a drummer who is hell bent on bashing thu to china but i have only have to push the volume to just over half, master about 4. built like a brick and has been knocked around for about 2 years on the road.

handles nearly broken and is awkward to lift.at first i dissapointed with the tone,it sounded honky.i have yamaha rb and olp 5 string which had the same strings(wyres)changed to daddario 1/2 rounds(expensive).what a change!bigger,meatier!ultra bass is a bit useless.i tried it when the guitarist was soloing.result:muddy,confusing.compressor also needs to be needs to be tweaked but 3 or 4 songs into the gig i am usually right.

as mentioned above built like a brick but controls feel cheap.after 2 years of 4 gigs a month plus travelling 2 practice it still looks new.its had a drink of cascade draught at a gig and still kept going(unlike my mixing desk)

the BXL1800 is good for small gigs and practice.we supported the angels once and it performed great running into the desk through the (large)p.a.due to its small speaker and size the sound is not as big as large cabinets but its power is good.i am sure the honky sound was due to the strings.good features apart from ultrabass.good value for money.fix the handle.

patate59's review (This content has been automatically translated from French)

The configuration is fairly simple, very intuitive. A 7-band eq, one climbs, descends, and in 5 minutes we found the sound research.

The manual, I used it for only a few small details that escaped me, after several months.

I play a bit of everything, I played on this amp with an Ibanez GSR 200 (I think) and cort b4.
I played both rock out loud in a garage that the bagpipe in the corner cafe. This amp is very versatile, I always managed to get the sound I wanted. Well obviously, is not a ampeg, both at the level of its price.

It also has a nice little effect, the compressor, which gives a sacred potato (especially with a low passive). There are also ultrabass, which, apart from doing everything tremble around does little to musicality.

I used this amp also electric guitars, and it sends as well. He served several times for a stompbox, and it works well (ok, I've never heard of stompbox on anything other than that).

So I used for 4 years, I just separate myself, only for practical reasons (to use a small amp to study).

This amp, I've done concerts with, I lugging, I lent, he served for basses, guitars, stompbox, back, inside, outside, in short, everything I done with. I heard many critical Behringer, but after 4 years it still works nickel.

This amp does what is expected of him, neither more nor less. At that price, it should not expect a sick stuff, but it does very well it should. Compared to power, it is also small and light (a good 25kg), easily transportable and sturdy.

I will ever be the same choice for the use I've had at this time, with good value for money.