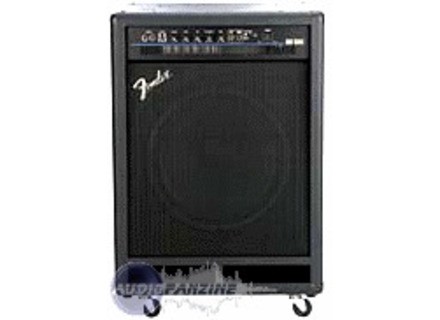 Fender BXR 300
4
It's the amp of my bassist (who doesn't have an Audiofanzine account).

The amp is used both for rehearsals and gigs, it's relentless and has a killer sound.

It's been with us since 1995, it has never left us stranded, very round and warm sound (he uses it with a 1976 Fender Precision bass or a down-market acoustic one).

The amp's only downside is that it doesn't have a line output, but considering what it provides, it can be forgiven...
Did you find this review helpful?yesno
»

As far as I'm concerned, and regarding this amp, I don't need anything more.

It couldn't be easier to dial in.
You can find your sound very easily.

I've had it for...24 years! Ouch, time flies.
It has aged without a single cough, I have even used it to amplify an electric double bass, it's awesome.


In short, a good old FENDER (solid-state, but a good amp all the same), it sounds deep (awesome fullness!) round and warm with my Jazzbass Fender (what a sound
Did you find this review helpful?yesno
»

Fender BXR 300
4
300-watt amp made in USA (it might seem stupid, but in the times we're living, I think it's interesting to point out). One good big 15" speaker, a control for the highs, one for the mids, one for the mid frequency, one for the bass and that's it, start making some music!
It features two inputs, a passive and an active one, and you can plug in you effects loops directly to it, which can be interesting if you have an EQ or a preamp.

It' very easy to use, since it only has 4 controls plus a volume knob.
It produces good lows and, I have never been disappointed playing it with my JazzBass. It's obviously not an all-tube ampeg, granted, but being a solid-state amp, it has nothing to envy the new generation for.
And it's rugged!

I use it with a Jazz Bass standard and, to be honest, it delivers in the low end. It doesn't have the most precise sound, it can be a bit muddled if you crank the volume up, but it responds very well when finger or pick playing, and even with slap (even if I don't master this technique). I play mostly rock!

It's been almost 10 years since I've been using it, I have used it for rehearsals and even some gigs in small venues or bars and it has never failed me. Good manufacturing quality, I think I could play ten more years without the sound being affected at all.
So, if you are used to playing hybrid amps of the likes of Hartke and Ashdown, we are not talking about the same category, but it's certainly more than enough for rehearsals and to play small venues!
It shouldn't be too expensive secondhand nowadays. So if you are looking for a powerful and quality amp, it's worth giving it a try!
Did you find this review helpful?yesno
»

Fender BXR 300
5
Solid-state. 300W into 4 ohms, 225W (I think) into 8 ohms.
2 inputs, one volume control, low boost, high boost, EQ with bass and highs and two mid controls: To choose the frequency and boost or cut the chosen frequency. compressor (with on/off button)
One remote output (surely for a footswitch for the effects loop).
Preamp input and power amp output, which also work as an effects loop.
Two jack speaker outs. No XLR output.

It would've been nice to have a gain and a volume control, plus a DI, but since the EQ and boost are quite all right, I give it an 8.

Very easy to dial in. It sounds fine with all controls flat. The boosts are fine, the EQ, too, especially the mid controls, you can shape sound with precision.
I give it 9 for the mids and boosts.

I must specify that I only have the amp head.

I play pop-rock in a band and nu-metal in another one.
I have two old Ibanez Precision, one is passive, while the other one has EMG and an active EQ, tuned in drop C. I play mostly with a pick.
Together with the amp head, I use a 15" DAS subwoofer and a 4x10" Peavey TVX cab with tweeter.

This amp is well-balanced, it produces a round and warm sound. The boost adds more lows, while the pick adds more attack in the mids. The low C comes out really nice, it's a real treat, precise, not muddy at all.
In short, I get the sound I want, with presence in the mix, be it in the low, mid or high end.
No noise, the only thing you hear is the fan.

My review was motivated by others saying this amp doesn't have enough power nor a good sound. I can assure you I've played gigs without a PA and it doesn't lack punch. The guitar player in one of my bands has a fat all-tube stack: Peavey triple X with a huge Marshall cab; the drummer likes to hit hard, and I never have to go beyond 4-5 for rehearsals or gigs, under normal conditions.

I've been using it for about 4 years.
What do I like best? It's a hard one, but I'd say the price.
What do I like least? Its look, the wooden box its former own made for it. The absence of a DI.

I've played quite a few combos in rehearsal rooms (trace elliot, ampeg, Peavey ... ). Recently, I took my 4x10" cab to test an Ashdown ABM 500 II evo and an old all-tube Trace Elliot amp head.
Verdict: The all-tube head is magical, it's on a higher level, but it makes a lot of noise!! To be honest, the Ashdown didn't impress me.

Trying out other gear, I have come to realize I have a very good amp and that I couldn't get anything better for at least 3 or 4 times the price I paid!!
I'll put it in a proper rack and add a DI to it.
Did you find this review helpful?yesno
»
Read the 13 user reviews on the Fender BXR 300 »