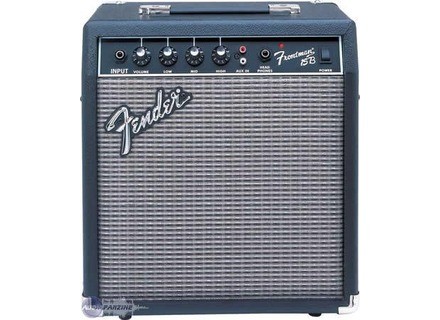 Frontman 15B, Bass Guitar Combo Amp from Fender in the Frontman series.

All user reviews for the Fender Frontman 15B

Average Score:4.1( 4.1/5 based on 7 reviews )
Value For Money : Excellent
Not satisfied with those reviews?
Our members also liked:

Fender Frontman 15B
4
I got this amp 6 months ago to begin my career as a bass guitarist. I got it at Long and McQuade in a pack with a squier Affinity P bass. I'm not exactly a big fan of the bass guitar, but the amp is good. I paid $400 canadian for the whole pack, But I estimate the amp alone would cost around $120.

This is a good amp that gives a nice round sound. It has a retro style net infront of it, which suits it. It has four knobs to control its sound: the volume control, low end control, mid range control, and low end control. It has a headphone jack, which is good for practicing at night or in situations where you would like to practice but cannot make noise. It sounds nice if you are fingerpicking, which is my usual style. This amp is perfect for practicing alone.

The amp is not practical at all if you want to play with a drummer, even if you set all the controls to high settings. When I play with a drummer I usually borrow my jam buddies 200 watter. The only way that you will even be heard through a drummer and a single guitarist is if you are playing slap. This amp sounds horrible playing slap, no matter what kind of bass you are using, and does not sound too good if you're playing with a pick. The amp tends to crack a bit if the low end pitch is at high settings, and does not emphasize high ends if you set the high end high. Once you exceed volume level four, the sound that the amp puts out cracks heavily, and is heavily distorted, so attempting to play with another musician is pointless if you want your amp to sound any good at all. Do not buy this amp if you are looking to use it to play with other musicians frequently.

This amp is very easy to haul around with you, and doesn't take up to much room, with it being not much more than a cubed foot in size. It has a very sturdy handle on top which can be pushed down flat. It is a pretty tough unit, I have knocked it around while carrying it and it can put big dents in the walls it hits without so much as scratching the unit. It is built nice and strong so I can sit on it while playing.

This amp is ideal if you are a beginner, and for practicing alone, but if you are just taking up bass and thinking of playing quite frequently with a drummer then buy a 30 watt. The headphone jack is excellent, but has a big jack so unless you have a set of headphones that have a big plug, then pick up a headphone jack converter for an extra 2 bucks. This is a good purchase if you have a bigger amp but want something smaller to practice with at a decent volume.

Fender Frontman 15B
5
I received it as a Christmas Gift. It came with a bass value pack. Not sure of the price.

It has a nice deep sound. It is perfect for playing with my friends at the house.

Nothing yet. Of course, I want a bigger one!!!

Solid construction and has an excellent sound.

This is an awesome amp for starters. It is a quality product for a low price.

Fender Frontman 15B
4
I got this for Christmas with a Squire P-Bass and a strap etc. It cost £79. My parents bought me it because I really wanted to learn and at the time, this was the best practice amp out there. Its and older style one (with the grey fabric grille.) This version was superceded by the Marshall MB25MkII and the Laney HCM30B so Fender repackaged it and changed a few bugs and brought out the new version (with a black metal grille and four silver screws visible.)

Its compact and light, its easy to carry one-handed and not to bulky. It has a great tone and sounds brilliant up to about 5 volume. When I practice I dont use my effects pedals (cant be bothered

I just have a really fat tone and this amp really sings. Also it is loud! At 3 volume it is really to lud to practice with. I end up using the head phones a lot.

It easily out classes my guitarist's practice amp. (If your reading Paul, just accept it.)

It clicks when your fingers touch anything metal because it isnt grounded properly. Also, past about five volume the hissing is just to much. But seen as its loud anyway, you never have to turn it up. For these few reasons, if it was lost or stolen Id buy the Marshall. Also, on the first version there is no speaker out, another bug that was solved with the new one.

Very well built. Tolex covered with metal corners. About the only weak point is the fabric grille over the speaker, which is why the re-issued version has a metal one.
Seen as it resides in my room and is only occasionally moved to go to a friends house I cant really talk about the quality to much.

All in all a good practice amp. It was the best, then it wasnt, now the re-issue is a serious contender. For under one hundered pounds, check out this, the Marshall or the Laney. This is possibly the longest review Ive ever written you know.
Well it wasnt, until I added that last sentance, which is now not the last sentance but the penultimate....

Fender Frontman 15B
4
I bought the amp at Mars music in Houston Texas about 6 months ago. I wanted to learn how to play the bass, a friend got me interested in it. I got a bass pack deal with a squier p-bass, the amp only cost about 150 dollars.

The thing that I like most about it is that it is compact and easy to take from place to place. It has all of the necessary controls for the beginer like myself. Because I have other roomates another good feature is the headphone output so I can practice without bothering my roomates.

The things about the unit that i dont like are the fact that at higher volume it seems like it distorts fairly easy. I have played on bigger amps before and it seems like the amp is harder to play on than others i have played on before. I had the opportunity to play on a Fender bassman 400 with my giutar and I sounded twice as good and twice as clear on the bigger amp.

The consruction of the amp is great. its very solid and i believe it will last a very long time if taken good care of. all of the controls on the amp are smooth when moving and have good action on them. The front grill is heavy duty along with the cird also.

I think that the frontman 15B is the perfect amp for the begining bass player like myself. I have come a very long way since i first started playing and the an=mp that I have has only helped me out.

This is THE CHEAPEST full size bass amp out there, i believe (correct me if i'm wrong), but even so it's an ok amp. The tone is round and bassy, but gets distorted a bit up in the high volume end (i would definitely recommend a cabinet when playing that loud. duh). simple controls, good looks, and a good beginner amp. The louder active EMG's of my other ESP sort of make the amp "fart" so to speak, but with the passive pickups of my B-50 go just fine.

it "farts" with too much bass gain. can't handle a distort pedal, the tone gets distorted with vol cranked up all the way.

this is definitely a good beginner bass amp, i got this when i was 15 and i still have it~ that's a bit strange, because i'm used to playing on ampeg cabinets. overall a good deal if you need some home practice without waking up the neighbors or, for you teenagers, your parents.

The sound is very correct, especially given the fact that it is a small 15w 8 'low end.

However useless to try as a group, it is not done and will lack power.

I bought it 10 years ago. It's a small amp reliable and friendly which will repeat at home without disturbing the neighbors too. The headphone jack and AUX input are very valuable for this use.

Repeat this choice? Considering the price, why not.
Did you find this review helpful?yesno

Llwyt's review (This content has been automatically translated from French)

Fender Frontman 15B
5
The Frontman is a transistor amp delivering 15W of power. One speaker 8 ".
There is a low input, a headphone jack and an RCA input for an auxiliary device (CD player, mp3, drum ,...)
Level settings, there is a volume knob, and 3 others for the equalizer (Low - Mid - High).

The configuration is simple, the settings are strict minimum.
It was easily a good sound, and knowing that this is a small amp for home. Through headphones, the sound is not bad, and very pleasant when connecting an MP3 player on the AUX input.
When the manual, it explains quite well the different possibilities of this combo, but hey, not very useful for a simple combo <img class="smiley" src="/images/audiofanzine/interface/smileys/icon_wink.gif" alt="" />

The first is an amplifier of study. Do not expect to play in a group with the power is not sufficient.
I play with a low entry level (Cort New Action Bass 4 strings), and the sound is good, more than enough to train.
Update: I also play with a Fender and a Fender JB PB, and the sound is very cool, like what this combo does not color the sound too much bass.

This is the first amp I bought, and frankly, it's perfect for beginners.

The pros: ease of adjustment, the weight and bulk.
The -: frankly, I do not know, for an amp of study, it is nickel.
In short, a perfect combo to learn the bass and repeat at home.
It was really good value for money.

I recommend it without problem.
Did you find this review helpful?yesno
Cookies help us improve performance, enhance user experience and deliver our services. By using our services, you agree to our use of cookies. Find out more.