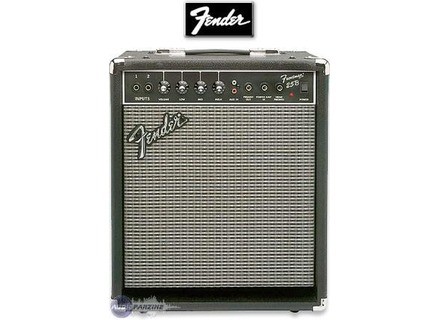 Frontman 25B, Bass Guitar Combo Amp from Fender in the Frontman series.

All user reviews for the Fender Frontman 25B

Fender Frontman 25B
5
I bought this amp in Oman, where I work, subsequently I paid probably less than I would have in Europe and at the equivalent of $150, less than in the U.S.
Strangely enough, I was left on my own in the shop trying out guitars and not looking for an amp at all.
I've been using various practise amps for several years, but having tried this one and being told that it was the last one they had, I couldn't leave the shop without it.

The sound that this thing produces is amazing. Right through the range it belts out quality bass, it's hard to believe it's only 25 Watts. I directly compared it in the shop with an Ashdown 150W combo, albeit a low end model, but costing three times the price. The Fender had a far superior sound

Since buying this, my only criticism about the unit is that its making the ceiling tiles in my flat vibrate.

The cabinet is the standard fare PVC covered plywood box The 'show business' silvery front grille is attched with velcro, presumably so that with a "viola!" you can rip it smartly off and prove to the astounded onlookers that the mellow sound they've just heard was, indeed, produced by a mere 10 inch speaker. I like the general quality feel of the rotary switches, which have a detent on the three used to adjust the e.q.
Although of Far Eastern manufacture-this one is made in Indonesia- my general impression is one of a well-assembled cabinet with good quality hardware and a pleasing appearance-pretty standard Fender I suppose.

It's not often that I buy something which I consider to be really good value for money. This amplifier is an exception. It's portable, the features are adequate, but most important,....it rocks.
What is worth noting is that Fender produce a 25 Watt bass combo in their "Bassman" range. This shares a common amplifier and speaker with the "Frontman". With cosmetic changes this is the same thing. It just costs twice as much. Remember, just say no.

Fender Frontman 25B
4
What kind of amplification (lamp, transistor, ...)?

What is the power delivered?

25watts. So it is good for rehearsal and small gigs. Live in a small room the volume was about 5 rpt between 3 and 4, home alone need not go beyond 3.


What are the settings, the effects? ...

no built-in, but given the quality of some integrated amp effects effect is not worse.

We get a good sound rather neutral, which for me is quality. If you want to color and customize your sound, you better have a good pedalboard.

It is not too heavy and fits easily into a car trunk.

With this amp I played rock, blues and funk, and it has never disappointed me.

I even plugged in electric guitars and it went over well frankly, it just lacked reverb.

It's been years since I use it and it has always provided. He does his job.

If you look for a powerful amp to metal then find something else, but for rehearsals pop / rock / funk / blues or work room will be fine.
For concerts obviously it's not worth a 25watts tube amp (which in this case would be plenty powerful for concerts).
Ideal for concerts, if you're afraid to miss performance is connecting the unit to an A / B box with another small bass amp. In this case you are quiet volume level, and earn a passing stereo sound.

This amp served in a guitar school (and will continue to serve in another school), I do not intend to change it.

PunkyBasseux's review (This content has been automatically translated from French)

Fender Frontman 25B
4
The combo Fender Frontman 25B uses an amplification transistor.
It dlivre 25 Watts all full, this is more than enough to work alone in his room and small group rpeter, sr good condition that guitar amps are not too powerful.
There are two input jack (so you can connect two basses), an outlet for prampli, accounts for a power amp and a jack for headphones.
Rglages are the minimum but you can get the sound you want without difficulty (Low, Mid, High).
It is a bit heavy but does not transport too much problem.
In résumé is a good combo for beginners and start rpter with his band.

The combo Fender Frontman 25B is very simple to use, there is little rglages so you quickly get used to the little monster.
And the manual is clear trs.
As I said prcdemment rglage are the minimum but you can find happiness thanks to the three buttons rglages Low, Mid, High.

I play punk rock and mtal but I use a powerful combo for group play.
However, when I work alone, it is well to have these styles APRS rgl ​​correct sound. I can get sounds slap of metal.
I use a bass Stagg BC-302, it's not upscale, but the amp makes it sound good!
I like to play punk rock through Low and Mid minimum to the maximum, the sound is sharp and dplacement of my hand on the handle can be heard. With mdiator more of a, I can play punk without getting tired! Ditto for the slap.
on the other hand, spices in small enough, when you put the volume back, it gives an effect of distortion pretty bad.

I use the combo for 2 years.
I like the practical aspect for beginners and start rpter.
This is my first combo, so I have not tried many other models before acqurir.
The report qualitprix is ​​good, I got it for 110 and it was worth the 150.