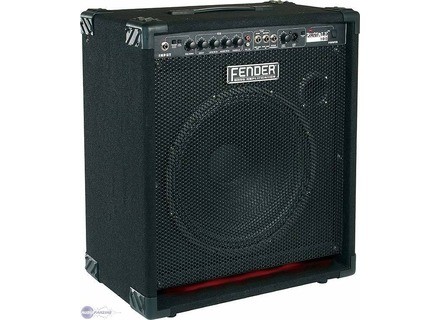 Fender Rumble 100 Combo 1x15
4
This is a cool little bass combo that should not be counted out if you're looking for a good bedroom practice amp.

The Fender Rumble 15 is 15 watts of power into and 8' speaker. RCA input for an MP3 player and a 1/4' headphone jack. 3-band EQ Treble, Mid and Bass and one Volume knob.

I was killing time in my local music shop while a friend was taking all day debating on which acoustic guitar to buy. I plugged into this as a low key, I can at least get in a practice session while this nut is playing every acoustic in the joint. Well it really impressed me. Great bass tone for $80. The bass I tried it out on was an Epiphone Thunderbird.

It's tiny, cheap and simple, but it packs a nice punch. Sure you can't gig with it, but it sure beats playing a huge amp one 1, you can get a really nice even tone from it.

Well it's 15 watts into an 8' speaker, so the power isn't anything to write home about. I wish it had an extension speaker out.

Very well built. I like that it is tolex instead of that ratty looking carpet.

This blew me away in sound for being a small practice amp. If you're on the market for one, try to pick one of these up. No frills, nothing you don't need, just a simple practice amp.

Fender Rumble 100 Combo 1x15
5
I bought this amp from a music store in my town for $290. I'm a drummer primarily, but I've been playing bass for about two years and my 15 watt Fender wasn't cutting it anymore, so I was looking for something bigger but not too expensive. I was trying to decide between the Rumble 100 and the Rumble 60. Luckily, the store had both and I was able to come to a quick decision. The 100 sounded significantly better at any volume, and only cost about $70 more. Considering that most people will never need an amp louder than this, it's a no-brainer. I'm sure it'll be the last bass amp I ever buy.

To me, the greatest advantage is the sound. I think it's great, even/especially when you start to crank it up. That 15" speaker really lets it sing. I admit that I'm a bass novice, but every time I plug in I'm still surprised at the quality of the sound that comes out. The features are great too; my favorite being the stereo inputs. This way, not only can you play along to cd's or records, but I can actually hook up my stereo to it and it's loud enough for me to play along (with drums I mean) and I can still hear the music clearly. The XLR jack is cool but I don't have much use for it, and the pulsating red light is just a great thing to show off to your friends. "Look everyone, it's talking..."
Oh yeah, and it has wheels which is a big thumbs up.

I honestly don't have any complaints so far. I know some people complain that it's a bit heavy to not have side handles, but it doesn't worry me.

Seems solid so far. It's the perfect size too; small enough to sit in the back seat of a 4-door with another person, big and sturdy enough to sit on if you're inclined to do so.

This amp is the perfect upgrade from a beginner practice amp. Seriously, look no further. It sounds great, the price is fantastic, and in general it is a solid and attractive piece of equipment with uses other than just being a bass amp. If I lost this one, I wouldn't think twice about replacing it with any other kind of amp. And it's once again worth stating that the Rumble 60 is no good-spend just a little extra cash and get a first rate amp.

Fender Rumble 100 Combo 1x15
4
I bought this amp from Musicians Friend June '04 for $299 + a bit of freight. I had been looking for a small but somewhat powerful amp for recording projects,something that would'nt take up a lot of floor space in my studio. This amp fit the bill in this regard.

Don't let it's compact size fool you! This little amp gets plenty loud! The 15" speaker really pumps! The EQ parameters allow for a wide range of tones, from a bright treblely sound (the horn helps here)to a deep wall shaking tone that does not get muddy at all, and anything in between. There's a CD input and a line out jack that adds more versatility.Heavy duty carpet covered construction,large plastic corners,metal grille all add to the quality of this amp.

The cabinet could have used side mounted carrying handles,as opposed to the top strap handle.The unit weighs around 60lbs. The red pulsating lights at the bottom are kinda gimmicky, but that should not stop anyone from owning one.(their sorta cool in the dark actually!)

Very solid construction for a smaller combo.The speakers are very good sounding,again for a smaller amp. I'm not sure how this amp would stand up under gigging standards or performing with a loud band,but for the studio,practice and smaller rooms this would be fine. Leave the larger stages for the "Big Boys"

All in all I have been pleased with the performance of this amp. Since my use of it is contained to the studio, I dont have reason to really "put it through the paces" by using it at high volumes for hours on end, but for a first amp or for smaller gigs or studio use it would be a good choice and is worth the price.

I thought the price was pretty cool. It is 100 watts and it has oversized plastic corners and thick capret covering the outside of it. There is also a nice and strong metal grill. It sounds pretty good too. There is a master volume control, an active/passive input selector, mid scoop switch, a 4 band EQ, an effects loop (send/receive), CD input, headphones jack, and a XLR line out with an adjustable volume control and a ground lift switch. It has a 15 inch Fender special design speaker with a piezo horn. Also, there are these red lights on the bottom of the cabinet. They pulsate as you play. They're pretty cool.

It weighs 60 pounds, but I don't care too much about weight. It should have side handles on it though. It only has a top handle. It can be hard to move around sometimes. Other than that, I can't think of anything else I don't like about it.

It has been holding up very well. There are no problems at all with it. I am sure it could take some abuse. I have heard other reviews about pieces falling off and stuff, but I have had this for months now and nothing has ever fallen off. I think it is pretty high quality.

If you are looking for a new amp and you are on a budget, I would recommend going with a Fender Rumble 100. It will not let you down. It has a lot of great features and it also has an affordable price ranging from $300 to $350 depending on where you get it. You can also gig with this amp in small venues and stuff. If you need more power, just use the line out and send it into the PA. This is a wonderful amp.

This review was originally published on http://www.musicgearreview.com
Did you find this review helpful?yesno
»
Read the 31 user reviews on the Fender Rumble 100 Combo 1x15 »

Published on 01/16/10
Fender is presenting its new Rumble bass amp at this year's NAMM show.