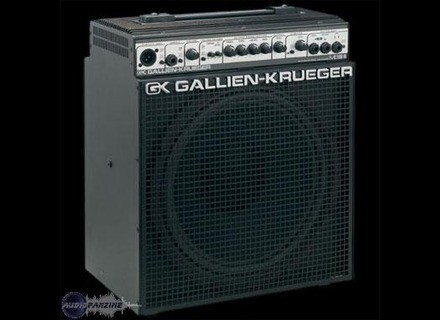 Applebite's review (This content has been automatically translated from French)

The configuration is a good amp rglages offering complete ... Less simple than SVT Classic, but not require a specially training either ...

Do you get a good sound easy? Faith, for fun I did the following test when I reu: I took my jazz bass I put all the rglages flat and sounded very dja s good. Same with my Warwick fretless. Finally, I plugged my bass in the same condition and also sounded a lot (too much slamming, piezo sensor requires) ... APRS when you want to sculpt the sound to find the one you are looking for might take some time: 4-band corrections HI, HiMid, Hilo, LO (a formidable efficiency, be it said in passing) + acute filters and low balance.

With regard to the sound a word: it is a versatile amp with a copy of his grace EQ remarkable. The sound remains GK namoins very modern, extremely well prcis Dfine across the spectrum (a happiness in a serious bass), default trs equilibrated (the test above proves dcris in part). Some will find it sounds cold, it's a remark that holds up when compared with an Ampeg, Trace Elliot or a Fender. It is probably not the amp for RV's roots reggae and blues ... Yet the sound GK maintains a rather special grain that allows it to return or even to magnify, and it is notable particulirement with a bass, the identity and the heat of the intrument used upstream.

I use this amp for a little less than a year, but I rvais for 7 or 8 years ...
I had then tried in a store and I t won in 15 minutes. I jou on many amps and since no one ever gave me as much effect from the TRS can be upscale in SWR but prices are not the same, and SWR Workingman SERIES, whose prices concurencent MBS, is really not the height.

I see no particular default: connection, sound, transportabilit report quality price.
Go to a potential default when same: the quality production of GK would be relatively erratic and he would arrive some smack after 2 or 3 years. A friend bass player had this problem with the 60 watt The series of economic GK (backline) and you can read testimonials of guys on the internet that have experienced the same dboires with MB. On the other ct there are also those who turn with them for 10 years and have never had any worries. In my case all okay until l.

If c'tait again I will take the head of this amp and an SWR speaker (the speaker GK is excellent but I have a preferences for SWR). When I ordered mine over the head n'tait REFERENCE, it is again for some months. Otherwise, if I were to buy a combo and even though I had twice as much dosh I repeat the same!

I take this post a few years to highlight the chapter APRS reliability of this amp. In less than two years: Tage prampli HS, power problem ...
Problem also at a friend's bass player who had the version 2 body.
To avoid like the plague in DPIT superb sound.

gridoul's review (This content has been automatically translated from French)

Gallien Krueger MB150S/112
5
Transistor.hp-amp 12 inches.
Power of 100 watts and 150 watts with additional cabinet.
-Headphone jack, effects loop, XLR DI sotie (switch ground / lift) all in front.
Line-out and speaker out the back.
-Input volume, treble equalization, high mid, low mid, bass, volume output, overload clutch, and voicing filter with adjustable contour and treble.
It lacks an entry for work on CD or drum machine but this amp has
few years.
-No chorus on this model but it is a small detail that makes it even better.

-For such a small amp there are a lot of buttons and it may surprise the uninitiated.
He just open his ears to get the desired sound, everything is possible, with incredible accuracy for such a small ampli.on can be satisfied with the 4-band EQ
without touching the filter foicing which I think is its usefulness enregistrement.chose
important, the sound is very well defined in several meters from the amp, the 12-inch HP
aidant.le remains very serious and tense this (advice for beginners, do not abuse the
Serious about your amp, no more than 2 / 3, and prefer the mediums without abusing either,
cut the treble slightly if necessary). mediums are quite present, but they control facilement.les highs are very good, no souffle.tout flat sound is already
beautiful and precise.
I have no manual (bought used amp)

It's suitable for all styles, rock, reggae, funk, jazz, metal (with extra hp)
variety, fusion.
"I use a fender jazz bass passive ineffective.
-Lot of sonic possibilities, too long to détailler.attention it is not an Eden, but it is one of the best for its size and price.
-Sounds depend on the style musique.j 'likes to play everything and this amp allows me to do so with minimum footprint and maximum character sonore.une small still preferred to the sounds of a hot gary willis and dynamic.

I've had some mois.je used at home in say, transplanted on stage by the sound.
-I like especially the sound quality report / template.
plume.connéctique full weight, pregnant with possibility of extension of the same size krueger Galen.
"I tried a bunch of amps that I saw in a store traivaille musique.EDEN.HARTKE.
AMPEG.SWR.ASHDOWN.et many more ....
It is value for money excellent.made in usa (we might say, they know how to do stuff
which take the road).
-It's been over 13 years I have done concerts and I play on the best gear for basse.si this amp was not good, I would not do it again acheté.je eyes closed.
try this amp before buying anything else!

Ceyresten's review (This content has been automatically translated from French)" Convenient, Versatile and strong!"

his flat is very faithful to the sound of bass, although initially relatively cold (specificity Gallien said this ...).
But the settings can get the sound you want without difficulty, showing that this amp is certainly one of the most versatile!
The manual is clear, but frankly, there is no need to leave St Cyr to use this amp!

Magnet big round well typed Fender Precision (I am also the proud owner of a model 76), I especially appreciate my config for this rendering very rock!
Also having an active five-string Carvin custom shop at electronics very powerful, I found that this amp, despite its average power without flinching cash all possible adjustments m ^ me almost pushed her to the fullest!

I use it since 1994 and has been my companion for many dates here and there and I must say that I love her little weight can take it anywhere without suffering a Handling fit for a roadie for Metallica!
Compared to other amps made in U.S. quality I truly believe that this is one of the best value for money.
In addition, he has solid reliability, since 1994 and numerous transport, he accuses a simple connection problem repaired by a simple input welding recovery ... after 16 years!