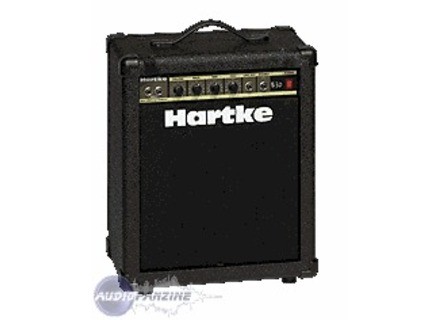 B30, Bass Guitar Combo Amp from Hartke in the B Combos series.

Hartke B30
4
I bought this amp to use as my very fist amp. I was basically looking for a beginers practice amp that had enough power to be used not only as a practice amp but to jam with my friends. I bought this amp at a local music dealer (Dave Phillips Music & Sound).I paid $160 for it.

This amp like others in the B series of hartke amps give the beginner or the advanced player with a variety of options. The B30 is probably the best beginner amp of this seriers because it give the player volume with its 10in. speaker and 30watts of power. It has a nice easy to control EQ settings too. It also comes with a quite a few sockets including, line out, headphone, an effects loop in, an effects loop out, and two input jacks (Passive and Active).

This unit, despite its rather powerful amp will start to break up and lose good tone once you get past 8 on the volume control. The amp also only has the three basic EQ settings(bass, mid, high), which may be fine for some players. But for those who might use pedals, having that fourth EQ knob(shape), will help a lot to shape the sound you want.

The B30 is a fairly well made amp. Its rather light and makes easy travel with the exterior handle and tuck away cord. It can also take abuse well, having whacked it on a wall or two transporting it from place to place.

Since i've been playing the electric bass
I've used the B30 for playing along to my favorite bands, and for just jamming in my friends' basements. It is not a hassel at all to move around and can take its share of nicks. Considering all this and the price at which I got this at, the B30 is a great deal for the beginner bass player.

Hartke B30
4
Purchased online from Zzounds Music. I needed a practice amp for late night use living room jams and church performances. Paid $100 (It was a Zzounds offer for a Trace Elliot that went out of stock - great service). Sells for around $130

This unit weighs 31 pounds and has a 10 speaker in a small cabinet. It is very portable and unobtrusively fits under desks and tables leaving usable space. 30 Watts. The sound is very good for practice and small group use. It works well backing ensembles at church. Separate passive and active inputs.

This unit will not fill a large room or compete with your drummer. If you need to gig under those conditions look elsewhere.Lightweight but solid construction.

Build quality is good no visible flaws. Hartke is well regarded for their professional combos.Great value for the money. A perfect fit for my initial use. If I gig I would need a larger more powerful unit like a Hartke Kickback or Ampeg.

CoOrbier's review (This content has been automatically translated from French)

a line-out volume is happiness!

Could not be more simple

flat on the equalizer, which is not super efficient

Its very true, correct response in a wide frequency range, rather than crystalline (often this power amps are a little deaf, not the case), but the bass is really well made (low-volume, Of course, beyond noon he drools a little)

I use it as a return to low delusions + beatbox

for guitar, the sound is still frankly rotten (but not for that)

I bought used a month ago (70 euros)
I am really happy, it's perfect for use as I do: at home, low noise, low drive + voice delusions.

Do not count of course not repeat with, or when a single unamplified guitar.
In this regard, amplification was insufficient for one micro rosette of folk guitar.

I admit I tried a few amps in this power range / price, the opportunity arose

Special mention to the output line that is very good, I use it as a preamp to record my bass on computer.

For that price (70-80 euros) I recommend it
Did you find this review helpful?yesno
»