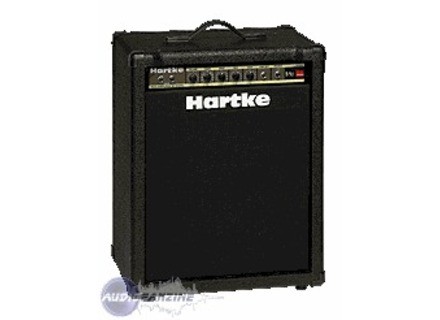 B90, Bass Guitar Combo Amp from Hartke in the B Combos series.

this amp was made in the late ninties 97/98 its been handed down to three people before i aquired it. some one as im told got drunk and kicked a hole in the speaker i opened it up and found a a quarter sized hole and i became suprised in how loud and good this amp sounds evan with a hole in the speaker. on two i can rattle everything in my room and some things in the ajasent room

the only thing i dont like about this amp is the EQ is hard to set but thats it .

this amp was made veary well its sturdy evan when i turn it up all the way theres no rattle in the amp .

bottem line this is the best amp i've ever played i've droped it down stairs turned it all the way up iv'e takin it on the road with me and iv'e never had any problems what so ever its a great amp .

sigdemon's review (This content has been automatically translated from French)

Hartke B90
4
90W bass combo a transistor EQ 3 Bd, medium and severe acute, sharp for a "arrondire angles"
a knob volume.
2 between an active bass, one for passive, a headphone jack, line out output and input and output for effects loop.
HP 1x15 "
Short as the classic but essential

A manual simple and clear, the sound setting ets trs intuitive, and allows for any kind of a good smacking and metal, has a well rounded and warm, with still a tendency lgre overboosted has the low, I would not recommend putting them thoroughly.

I use to play mostly metal, in general I sound pretty heavy, with a 5-string bass, if the serious sounds good without saturating, to slap, tapping etc, and its acute nickel.

I was from December 2004, I had no problems with is, I like the refinement of its sharp with the knob, the default will be his weight, and a speaker 15 ", 2X10" shall have t a better configuration for this bte, but overall I'm satisfied.
No problem with repeated even with a drummer.
Did you find this review helpful?yesno
»