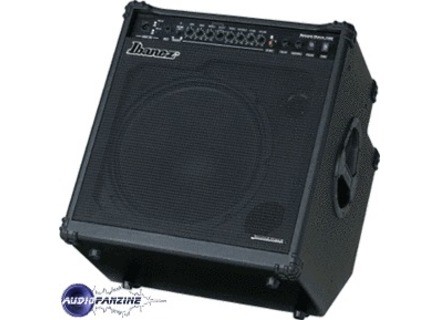 increaz's review (This content has been automatically translated from French)

Ibanez SW100
5
100W This amp is amazing!
It's a bass amp and a transistor I used as guitar amp.
It dlivre a power of 100Watts.
It also has a wide range of rglages (contrairemennt the Rumble 100, for example ..)

The configuration is very simple and we get a good sound ts in moments.

It is ideal for fans of metal.
It is dott a tweeter (which can be activated or not) and this tweeter makes the difference.
On the one hand, it gnre a heavy sound thanks to its "standard" HP and the other, it gnre powerful sound thanks to the tweeter.
I use it with an Ibanez GRX-170 and a small multi-purpose ZOOM (price = 70euro).
It is just as well get a heavy sound (a la Manir Soulfly) that the acute and trs trs clear.

I use it for almost 3 years.
J'aprcie that most of this amp is its power.
I had a Rumble 100.
It has a relative quality / price.

musicman47's review (This content has been automatically translated from French)

Connectivity in jack, can connect another speaker on the head in 8 ohm

The settings are simple. no effect (I have a boss me50b but remains in his hut, I prefer the natural sound)

The manual? Super nice with configs already done but it is quite useless in front of the simplicity of the amp.

led to avoid smashing the HP with a signal too strong

It should be enough. I play with a Squier Jazz bass and especially with an epiphone thunderbird and ... AH!

One gets a very satisfying sound, it happened to find "flat" or "cardboard" but in a concert (the acoustics of the rehearsal room is not top-_-), it sounded " growl! but not as a head ampeg SVT classic all-tube recess to 1650 €!

I preferred him the sounds of a SWR WorkingPro 15 (100w) more round and warm but it is weaker than the SW100 and the sound can become downright mushy, muddy. With the Ibanez bass is more distinct on the recording.
But a good sound very convenient when one seeks a little (do not forget to send the potatoes in the lower to make it sound)

The wrists are convenient for the bevel tip is handy if you want to avoid having the legs trembling from the spread of soil but requires aditional emconbrement (it's almost a cube!). I had the SW35, it's even more special with cho less) which was very inadequate TIMES (LED lights up all the time so I sold). 400 and buy some euros 2 years ago. I also tried a fender rumble (like the SWR but with more potato). The quality / price is quite sufficient. With the experience I would look into an amp head + body more in practice to evolve. Ashdown MAG 300H a kind plus a MAG414 (a barely 550 € and 300W!) Or series ABM (1200 € in config header + body 500W 4x10 'to 575W of thunder!)