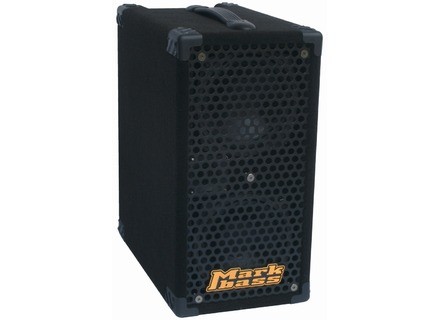 Markbass Minimark
5
OK. It's black, about the size of a portable sewing machine, carpet fuzz finish, and has no strings. I have no history as a musician. History is written by the winners ... and I am merely a pawn. I play bass, for as long as I can, or as long as someone, anyone, will have me. I play in a duo and in a string band. No drumbers, no geetard gawds, IOW I am spoilt rottin. I want music where stuff happens, musically speaking ... IOW I don't dig folkies, hippity hopsters, or other boringly monotonously unchanging material.

I buy stuff used or on clearance, and then do my best to forget what I really paid. Sometimes I trade stuff in. I have two of these, so I assume I musta gotta really great deal, at least once, maybe twice. I think they were about $500 each. I prefer to buy stuff that is either $500 or $1000. Stuff thazin between, or higher, or lower, is usually not so appealing.

It sounds cool, is very light and small, and very simple to operate. The simple controls are verrrrry effective. It is competitively priced vs other smallish premium grade combos like the GK MB or Phil Woods lines.

This is a real gig amp the size of a practice amp. It can play pubs, taverns, etc with crowd noise, or restaurants, even large ones cuz they tend to be less noisy crowd-wise than pubs.

There are limits to what you can get from such a small package, and whilst I don't love living within those limits, they are no so terribly limiting that I will carry a heavier rig unless I absolutely positively hafta do it.

This rig will 'fart out' if pushed really hard, but carrying an extension cab is not too great a burden, and that will cure the farting [if you plug it in].

It's very small and seems well built. It has a fan that runs all the time but is not noisy [yet!]. Controls are limited to volume, contour, and low-pass ... all adjustable. There's a recess in the cab that kinda protects the knobs during transport. The grill is thick plastic.

It runs 150W into a pair of amazing 6' drivers [plus a tweetie], and has a jack to add an 8ohm extension. With an extension you get 250W into 4ohms. You can also switch off the onboard speakers and play a 4ohm external cab at 250W. Obviously, you wanna make extremely verrry sure to switch off the onboard drivers when using a 4ohm external cab [or the load would drop to around 2.5ohms ... baaaaaad news !]

You could almost say it's in a class of its own. There's the GK MicroBass series and the Phil Woods Briefcase combo, and maybe some booteakie things I'm unaware of ... but this one is also extra simplified, no EQ, no FX loop, etc. It's more a matter of personal taste whether you need lotsa controls or not. THe few on this one are really very effective. I use it for EUB and fingerstyle bass guitar, usually FL. Maybe it wouldn't do well for a spanky frettted style, but that style usually also means a loud band, and this is a small amp, so who cares ?


I don't see it as directly competing with those other lines, which have more elaborate features. That puts it in class of its own, where it does a great job, and so it rates a '5'. Plus, it has actually put my own GK MB combo in the closet ! Who needs all those twiddley knobs on the GK, when you can just switch this on and it always sounds great.

And very easy to setup manual. You can disable the speaker to play that headphone for example.

When you push the volume, we discover the hidden cabinets and all begin to vibrate beast.

I bought it to play with my jazz combo bass. After having found my sound neutral and not too dry, it's cool.

Sound with an electric bass (jazz bass) really tears. And you can really have fun.

Lowlight: The fan. As a noisy PC tower .... if you are alone in be in the silence, the noise is obvious. Ditto if you want to use in a studio config ... frankly it's abused. The noise comes from the movement of the intake air (not that the fan in him even).
Many amp have ventilos that activate in the event of temperature rise. Or a cooling system with aluminum fins (without fan).
But this combo is so compact and powerful for its size they make the choice to put a hair dryer for cooling).

When we play, we do not hear the fan, that's clear. It is only in moments of calm, flatness, loneliness, that ca be excited. This is the downside.

If the weight is light.
Not yet tested the DI output.

trevellin's review (This content has been automatically translated from French)" on the verge of buying ..."

Markbass Minimark
5
it is a class D amplifier that delivers 150W and can deliver up to 250W with an external HP 8 ohms.
it looks like a tower PC, HP has two 6 "and is super lightweight! (they say it weighs 9.4 kgs, but I think it is even lighter than a tower PC)
for controls was, an instrument input (input), a master volume (level), 1 blue LED that lights up when the input signal is too high, one VLE (vintage loudspeaker emulator button, button filter high frequencies) 1 button VPF (Variable Preshape filter; increases low (around 35Hz) and treble (10khz) and cut the midrange 380Hz) 1 headphone output, 1 blue LED to signal the start of the amp and finally, an ON / OFF button to start the machine! phew!
bravo for simplicity of presentation!

frankly, more simple, it is hard to find! (Except maybe the signature amp vox brian may in limited edition where you just find a volume knob!)
the manual? not lu ...
sound, I liked but it takes up the volume to begin to growl amp ...

the question "is it appropriate for your style of music?", I find it hard to answer because I'm torn, on the one hand, he has the qualities to explore and, on the other, I find it is oriented "media" noise level, I think this amp suits rather styles "grooves" funk, jazz-rock, Latin music ...
to rock, there are more suitable!
for sounds, you can, of course, setting the amp, get a good sound slap, mediums groover for the pastoral, but always with this side "medium" which appears ...
I plugged in my TRB6JP signature and it really was not bad ...

I tried several times to realize sound and abilities he possesses ...
what I liked, and the feather weight (barely one feels at arm!), the minimalist side at the sound setting (I love!), yellow markbass logo on a black background (I love visual contrasts!) and the ability to connect to another speaker to mount the overall volume 250w!
I did not like, and the price (€ 839 in store in Grenoble) that pain in the ass and I find expensive for so few watts, the sound typical medium that may not suit everyone, power well weak to play in a rock band and this version is no longer produced MINIMARK at present 150w and the new version is pretty! (With HP 2 egg yolks!)
I still put a good score because I was seduced by the minimalist concept and interesting sound power ... the rest (negative points) is to meditate ...

Fabe_solo's review (This content has been automatically translated from French)

Markbass Minimark
5
Simply Ha-llu-ing it! 3 knobs and 1 volume a VLE for a vintage sound that VPF will do the rest ... J'tais party to buy an ampeg BA112T for RPTS ... and fortunately my store f tiche Veitz guitars (Christian) Strasbourg for not naming o) pointed me to this brand!
You will find all the technical specifications on which site nimporte dealer of the brand.
Transistor amplifier, 250W into 4 Ohms 8 Ohms in 150, 2x6 inches! + 1 pizo.
The rglages are childish, the DSIR's appointment is in the 1st grade ds!
Lol between a CD, a headphone jack, 1 x line out and a DI output speaker and yes lol all options.

I play in a cover band Pop-Rock from the Doobie Brothers through softphone, The Cure, U2, Luke, Keziah Jones ... etc
And be heard round the two guitarists (Marshall Hiwatt 50W + 70W) 1 drummer 1 mnestrel n'tait hard and not win, o), well this little amp and my Fender Deluxe US Plow and all have agree!

The ITS is the 1st note rdv ds! Nothing to add both clear, round, warm, powerful (Well ok my Plow is for something too).

That says it all!
The only false note may be the price lev plutt but as always the quality is paid. It is true that the price per kilo of caviar that is close!

But I do it again the same choice without hsiter, however I will use it for the 1st time in concert soon and frankly trs branch on my 4x10 ... a lfait graaave o)

Did you find this review helpful?yesno
»
Read the 5 user reviews on the Markbass Minimark »

See all 63 photos of Markbass Minimark »