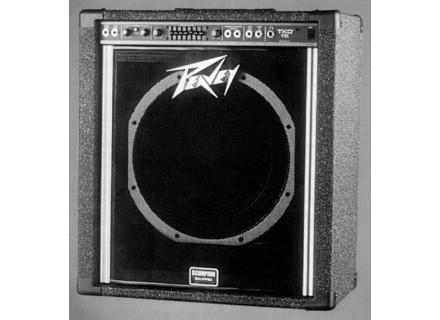 heads on fire's review"Not bad for a bass amp."

The amp is very easy to use. The downside is that it isn't terribly loud. It's enough to be heard in a band practice, but not really for stage volume at any decent club. I'd say a 200 watt amp minimum for bass would be good for a club, and this won't cut it. It also weighs wayyyyyyyyy too much for what it is.

Sounds are where this amp does the best. It doesn't get very loud, but what it does do is sound good. The EQ is extremely tailorable to whatever frequency range needs cut or boost. The contour and bright switches also help customize the sounds. This amp excels in any style - rock, blues, jazz, metal, country, soul, funk, gospel, contemporary...anything. I like to have some kind of dirt circuit on a bass amp - something to bring out some grit, and this doesn't really do that, but the EQ is so good that I'm still giving it a 7.

Overall, this is a good amp for anyone that doesn't need to play loud venues. It is an excellent amp with which to practice with a band, and it gets a lot of different sounds. Its versatility and Peavey's legendary durability means we'll still see these around in 20 years, and they'll still sound good then. One caveat is the size and weight - this thing is an absolute monster to move around - one would need a truck or wagon in order move this amp from place to place and to not destroy the seats of a car. It seems unnecessarily heavy for what it is, but then again, Peavey's got that reputation for durability, so maybe that's why it weighs so much. the TKO 115 is not a bad choice for a bass amp, but be aware of that weight issue.
Did you find this review helpful?yesno
»