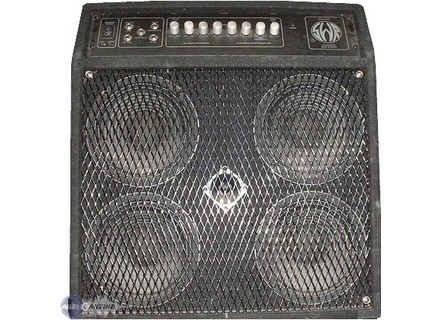 All user reviews for the SWR Silverado

Sjön's review (This content has been automatically translated from French)

SWR Silverado
5
Amp with tube preamp.
It sends 220W, 350 if we add an additional cabinet.

The connector is provided as we have taken a pad 5 on the front left, are:-Effects loop input
-Effects loop output
-Tuner Output
Entry-passive / active
Entry-active
At the extreme left of the dashboard, an XLR line output with a small switch to dub the direct or online. At the rear a headphone jack and a plug for the additional cabinet. So in terms of connections there's no reason to complain, you can do anything.

The settings from left to right: Gain, Aural Enhancer (we will return), Bass, Mid, Mid Frequency Selection, acute, Effects Loop, Master. A Power LED, one that illuminates when the limiter is solicited, and a final which warns you that the amp is clipping (clip) and the neighbors are on the verge of nervous breakdown.

On the back of the beast we have switch On / Off, and also the switch from HP with 3 positions. Understand HP cut (for the game with headphones), only HP or HP + tweeter.

The baby was conceived with a limiter, which can disengage by pulling the knob in the effects loop (push / pull).

The Aural Enhancer is the strength of this amp as more it is pushed, the more you gain clarity by eliminating the passage frequency noise.

We live in trust with the very tough material (your back will tell you), and the front line with the knobs is clear. The equalization is sufficient, but somehow we forget in the first instance of the grind when you plug the instrument because ... ... all WOUCH flat is rich, warm, crystal. Eden in the family, EBS and other associates.

Past the stage of bliss, it is his choices on the determination of Aural Enhancer (see above), we quibble about the EQ, we choose whether or not they disconnected the tweeter, you push a little volume and c ' is gone! It is always well defined, even with a string of Si

It suits every style I think it's more a matter of taste after, but it is true that it is difficult to escape a slobbering his rock'n'roll. SWR has long been the endorser of Marcus Miller and is easy to see why. The HP 8-inch tweeter and Aural Enhancer is a marvel for slappeurs of all kinds. It's nervous, clear, slamming and superbly defined. I used it initially with a 6 string to repeat composed of metal and he followed closely the two Rectfier Mesa Single 50W.
It magnifies the sound of my Squier JB Funk and assigned to him these days is pure happiness.

Scenes for the slightly larger 15-inch dish should be exercised I think, giving a power output of 350W, but you have plenty to make the halls. I intend one day to buy a SWR Triad Cabinet, which will give me the full power of the machine with 4 to 8 hp, one 10 and one 15. All this pretty world with a tweeter, I know there will be absolutely everything, accuracy and definition.

I used to be a Laney BC50 (50W transistor), and I really fell in love with the sound, which I think will be my companion for life. That's all I expect from an amp. The only weaknesses are the weight (43kg anyway) and congestion because it is fairly square.

I bought it used there are more than six years, and the seller was either a real hurry, or idiot, because he demanded € 600. So given the qualities praised in this opinion, I think it is not useful to talk about the quality / price ratio or choice with experience. I would put all 10 because he deserves all.
Did you find this review helpful?yesno

Too bad there was not a real compressor.

Usage is simple, the corrections are very effective palette of sounds ranging from funk to reggae, to rock, blues, jazz and Latin / bossa. It is hard not to find happiness. All bassists who heard wanted to try it: pleasure guaranteed.

The preamp is particularly magical in the studio or in transplanted for facade on a sound stage. With that, he has no competitors!

However, this amp is not dedicated to the blues-rock genre Ampeg greasy. The sound is fairly straight, well defined flawless. Instead, modern roots, although there is a treat reggae (with HP 1x15 'and more, without sharp horn, with aural enhancer bottom)).
The manual offers a variety of settings.

I play reggae, funk, blues, Latin music. No complaints. I sing Jazz Bass. The sound of 4x8 '+ trunk is a bit tight in the bass in some rooms: an extra HP or 1x15 2x12 is worth while. It then goes from 250 to 320 watts.
I usually shoot in the low 4:00, treble at 2 o'clock (except reggae where they are at 10 am, wrong cut). I never touch the mediums. If I want bass very clean, I push the aural enhancer (which eliminates harmonic noise in reggae), and I gain in clarity without pushing treeble. Otherwise, I put in two hours to get rich harmonics without being invasive (the "Pasto" bridge pickup).

Subcultured on a sound system (large rooms), the preamp does wonders and it touches the end of the end.

I bought 1500 euros in 1996. It is no longer being manufactured except 2x12 "+ Horn Driver.
His great fault is its weight (45kg) and its tail: check it into the car before you buy! I usually do not take ever again, preferring a small Laney BC120. (In the studio, a SansAmp Bass Driver is more convenient but sounds worse than the tube preamp, do not charier!) I bought soon recessed wheels (slot).

An anecdote: one day, in a Blues club in Luxembourg City, a beautiful body to three Ampeg lamps. I plug my bass. Its rotten: the lamps were dead (microphone effect). So I used my SWR and I had a beautiful sound on the front (PA).
In general, the Sound: "Damn! It sounds really good this amp! .." Bassists, envious: "Uh You got your stupid expensive one?" "Yeah: 1500 euros anyway ..." (1996 prices)

Otherwise, I think the 2x12 configuration is more appropriate for a more round. However, coupled with a 1x15 ', it works wonders. The sound does not drool.

I do not know David Eden (former employee of SWR) It seems that's fine too.

I would love to find a small Gallien-Krugher ME (15kg) for my back.