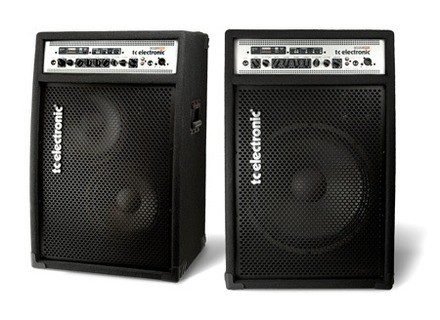 This thing is loud! There is a couple of realy noisy guys in my band and this combo has no problem keeping up with them. If it is dBs you are looking for, this is it. And it does it with ease: even after an hour of loud playing, it isnt really warm.
The built-in tuner is really practical and works well.


Cons:
Stage user friendliness
We think the engineers at TC don't spend much time playing on stage with their own equipment. Why else would they use small black buttons on a black background? Impossible to work with in a low-light. And why would they put the 9 main knobs in a graphical order, rather than by function or importance? Or the XLR on the front panel?
TC claims a lot of new thinking went into this combo, but the result in terms of usability isnt not a step forward.

Sound
My main frustration: the sound. It is almost impossible to get a nice an mellow sound out of this combo. It has an somewhat irritating in your face type of sound with a very high amount of energy in the deep lows. It sounds very booming, bulky and undefined. Even with the bass en low-mid controls turned completely down, it still sounds bulky and intrusive. Esp with my Stingray, it demands constant fiddling with the knowbs without ever getting it to sound nice. I think the controllability would be better if theyd chosen 'lo-low' and 'hi-low' controls instead of a low-mid and hi-mid.

These sound issues don't just occur in the backline but during gigs too. Since I use this combo, our sound man keeps complaining about a fuzzy, muddy, but yet dominating bass sound.
It drives me crazy at times. I bought this combo to replace an old Yamaha B100-115 II with 15' extender cab, but I've put this back in use yesterday. All of a sudden, my basses sounded great and cathy again and I got happy faces from my fellow bandmembers.

It is well built. It was shipped here (a Caribbean Island) by FedEx. The box arrived pretty battered, but the combo seemed fine.

Because of my residence (A smaller Caribbean island), I coud not go to shops and make a choice. I bought it online, based on TC Electronics great reputation.

I am truly dissapointed in the soundquality to such an extend that I will probably not use it anymore ons stage.

I got the impressing this combo is designed by desk-people with calculators and not by working bassist with ears.

Ease of use and lots of feature: Built-in tuner; SpectraComp compressor; TubeTone to dial in just the right touch of grunge. TweeterTone oput the tweeter volume on the front panel witha touhc of EQ that appears to sweeten the sound at higher tweeter levels. Three user defined-presets. Headphone out and stereo Phono in for silent practice. 500 watts in a relatively small combo. Loud and deep for its size. Projects well.

The only downside for some players might be the BG500's 70-pound weight and the fact that the two side-mounted, spring-loaded handles can make it awkward for a single person to jockey the amp into a van or car trunk. But, coming from an era when a bassist had to lug around an SVT head and two 810 cabs or an Acoustic 360 folded horn, I think the BG500 looks like the Stonehenge prop in 'This is Spinal Tap' by comparison.

Solidly built and covered in carpet to take road knocks. Good control layout and ease of use.

It's very hard to believe that so much sound comes from a relatively small box. It's a warm, defined, friendly sound, too, one situated comfortably between TC's RH450 and Staccato '51 heads -- not really hi-fi when set flat, but certainly not muddy or woofy. And it's affordable -- less than $700 USD street. Packing 500 watts into a mid-sized cabinet, the BG500 would be perfect choice for a blues or rock player in small club settings without PA support, or one in larger venues with PA support. I never ran the master past noon with the Gain control set around 11 o'clock in a room that seats 500 and, in fact, found myself actually turning down a few times. Even a jazzer would find a pleasing tone in the BG500. I might add that the BG500 combos are covered in durable carpeting, which should please those who think the painted finish on the TC RS cabinet series is too fragile. It's small but mighty combo for the working bassist.