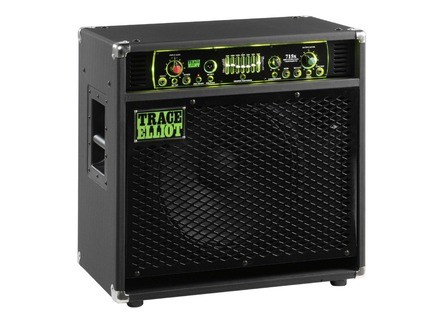 Trace Elliot 715X
5
The Trace Elliot 715 X is a top tier bass guitar combination amplifier. I've used this for recording electric bass guitar in the studio. Don't let the size fool you, this is a very power amplifier. It has 500 watts of power and a single 15" speaker. It's a solid state amplifier and also has a 1" horn in addition to the main speaker. The amp has all the routing options you could ask for, with 1/4" connections for input, line out, and a send and return loop. It also has an XLR output for taking a direct signal from the amp.

It's not too hard to use the Trace Elliot 715 X, but it has a ton of features and controls to be aware of. First of it has a seven band graphic EQ which sounds great, in addition to built in compression and gain control. It's definitely a self sufficient amplifier as you can get most of the sounds you're going to need right there. I don't think a manual is necessary, but it can't hurt to have it around if you've just bought this amp and want to know everything about it.

The Trace Elliot 715 X is up there with some of the best bass amplifiers that I've ever recorded with. I honestly wasn't expecting it as I didn't know much about Trace Elliot and it doesn't exactly look like it's going to be an incredible amp. It's a lot smaller than most amps, but still packs an insane amount of power and can certainly get loud enough for recording or playing shows. The built in EQ and compression sounds fantastic and is a great bonus in addition to the great amp.

The Trace Elliot 715 X is definitely a professional's amplifier and seems to be popular amongst pro bassists. It's expensive, but not terrible when you think about what top end amps will run you. That said, for this price you could get an Ampeg with a lot more speakers and louder sound, but if you aren't playing loud rock music, this might be a better choice. If you're a bass player and you don't yet know about this amp or Trace Elliot, I'd highly recommend getting hip to it.

SYL6's review (This content has been automatically translated from French)

The setup is simple?

Yeah, there's the right thing, not too many buttons and rglage enough to have its own sound.
Do you get a good sound easy?

Yes, today I only use the Pre and qualiseur shape and the sound suits me perfectly.
The manual is clear and sufficient?

Yes, the settings to franaistous are explained with examples of same rglages

<p style="margin-bottom: 0cm;"> I play mostly rock and mtal and drive this amp and sends the sauce is qq style. Just see the artists playing on Trace Elliot to realize that it can be used in any style.

<p style="margin-bottom: 0cm;"> I get the sound I was looking for a well rounded show with a fat slap in good slamming. I use more SETTING THE amp than my bass so low rglages Plutt neutral amp and I turn on the first shape and dug qualiseur mode (severe acute and augment .

<p style="margin-bottom: 0cm;"> <strong>What are the sounds you prfrez that hates you?</strong>

<p style="margin-bottom: 0cm;"> The amp was in the belly, I tried the GP 1215 is currently 12 named and I immediately hooked. For me his best record is slap in the medium sound very good. I also played with fingers and tapping and I like her too.

<p style="margin-bottom: 0cm;"> The only regret I have (because there's a catch tjs) is that I have a grsillement or tremor in the head on some notes but when I play in a bigger one pice do not hear ... (And just a good amp and not of the elements of the play or I'm crazy) then is it a manufacturing default? Do I landed on a product with a slight default? Or is it during the delivery? Ch po! For the moment it is not a Gnant could become so if one day becomes all the notes and bcp stronger but I hit the monkey.

<p style="margin-bottom: 0cm;"> <strong>What is the specific feature you like best, the least?</strong>

<p style="margin-bottom: 0cm;"> Plus: Ben is the style trace elliot whether aesthetic or musically, that's great. The retro green adjustable lighting really gives the amp a good look, it is not too big, I had a peavey max 115 50 watt and it was the same size and the cover provided is very s fine too. The level cf above.

<p style="margin-bottom: 0cm;"> Minimum: apart from the elements about it, nothing.

<p style="margin-bottom: 0cm;"> <strong>Have you tried many other models before acqurir?</strong>

<p style="margin-bottom: 0cm;"> Considering the amount of existing models, I can not say no but when I tried the same bass and Mark Peavey and my choice is rest on Trace elliot.

<p style="margin-bottom: 0cm;"> Yes, without hesitating, his power (500watt speaker with supplmentaire) is sufficient for RPTE and concert. I think eventually buy a 4 * 10 and guess the brand I'm going to take? Trace elliot.