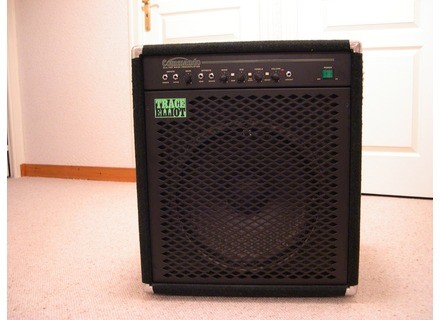 Trace Elliot Commando 15
3
I bought this amp from Promenade Music in Morcambe, UK. it cost me £400, although it was priced £50 higher, the sales assistant was polite enough to offer a reduction. i bought it because of the reputation on Trace Elliot, and several of my friends had bought similar models and i liked the sound they got from them.

for the price, you get an amazing sound. very clear, with so much room for modification. the tone controls really do give so much reach over the sound. they are also easy to understand and use, which ws important to me, as it was my first large amp. also, at 150 watts, it was all the volume i'd ever need.

when compared to higher range amps, it just doesnt have the bite. it sounds like the economy amp it is when compared like that. although i think better than other amps of its level, it does suffer that defficiency in tone that a more expensive amp would have. also it is rather cumbersome, with only one handle on the top, it is awkward for one person to cary, but impossible for two. also it lack features such as a balanced output, a tuner out/built in tuner, a mute button, input indicator etc

although it has been through a lot with me in my travels, it has only broken when used incorrectly, and after a repair, it hasnt reccured. actually, when i think about how hard it has been driven, and how many time ive dropped it, it must be hardwaring to still be working. the outer skin coould be tougher, as there are quite a few tears, but i can see the amp working for many years yet.

as an economy amp, id say that this fits the bill well, although dont expect it to do anything spectacular. its a good workhorse amp, that will give a good clean sound, but dont expect much crunch, if that is what you're after. if needed, it will do well as a performance amp, but if i had the luxury, i'd keep it firmly in the practice room.

cocobass's review (This content has been automatically translated from French)

Only default, the coating is a kind of thin laminates glue on it and that tears at the slightest friction on a surface a little rough .. The amp is covered with small tears quickly if you do not protect a house in displacement ... Besides it is a trs robust, but heavy and bulky! Must have the muscle!

Amp trs simple to use, the manual is in English so good luck ... But by spending a few hours found what you want. It was a warm and full sound trs, I really like, it's big fat trace elliot you like them.

I use it a lot to rock and jazz and it sounds good trs. I use it with a Lag Jaccobacci 400 5cordes and frankly a ring. It is round, precise and well wide, but the bass is also qqchose in my opinion. On a low of less good quality has also sounds, it's really a good quality amp robust and efficient.
We can get a lot of it sounds good but it is rather clear that for many hot and sounds serious, is lacking a bit of potato in the treble.

I use it for soon 4 years old and I am satisfied but I'll have to part with it ... Indeed it is both too powerful and too little, let me explain ... It is very well to play in bars or make a repeated 'in a small room with instruments that spit too qd but you want to win the power was stuck .. Pass three quarters of the volume is completely saturated (normal to the transistor) and is ingested, or I now repeated in a room large enough o I need horses behind me while keeping her! So I'll have to buy a column that has a power that this amp will never ...
So now I do not use more than to work for me and it's too powerful for cons, it has something to scare the neighbors, 30W enough for me.
Having said this n'enlve nothing to the quality of the amp in itself for applications such bar and Repeat 'rather jazz (a punchy rock guitar well it is quickly Volume Exceeds ...) o l is a small wonder, with a quality worthy of trace elliot. Anyway, I looking punch and power in the volume it is not quite for me ...

If I entrust myself to do only of jazz in the early training is clear that I bought it, or if I did not play in concert back through a sound system ...
Anyway since I go on the rock and jazz big band, the I need a more powerful amp! Too bad ... I will miss ...

-hades-'s review (This content has been automatically translated from French)

I play with the volume of critically ill patients (the guys too hard too) so as it is the weak point, ca speaks for itself
not many round (a high volume) if a midrange sound is great, snoring
the bass: Ibanez SR 900

I agree with cocobass, this amp is downright disappointing in high volume, nothing to do,
it saturates violent, more serious, more grain, nothing ... what damage !!!!!
Not for Metalosis volume and edgy, but used reasonably
there is a very very good amp, and for the price, we will not do dificil

Flo Jobb's review (This content has been automatically translated from French)

As summarized the various opinions, excellent amp, but sorely lacking in volume when playing with two guitars disto!
Even more precisely in a small bar where the battery occuppe pretty sound space, the volume must be pushed almost to the bottom, causing a slight distortion and more makes the amp morfler: that of the bar where I played dropped.
Not to be used so if you play with metal or even a little edgy rockers.