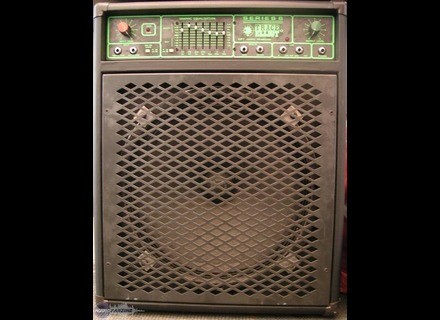 Trace Elliot GP7
5
Equipped with a 15-inch speaker, the gp7 is loud and proud. It is rated at 250 watts, but I am unsure of the true power, but it will get loud enough for whatever you need without distorting. It has a 7band graphic EQ which really sets it apart from most bass combos. This trace elliot delivers wonderful tone and accommodates both active and passive basses.

Obviously, the graphic EQ isnt as simple as a standard bass, mid, treble, mix, but the versatility is definitely worth learning how to manipulate it. It takes a bit more knowledge than a typical amp to get the best sound, but even a flat EQ on this amp sounds magnificent.

Of course, an amp is just a vessel to carry a bass. No matter the bass, when plugged into this trace, it sounds amazing. I started out with an ibanez 200 series, which is pretty low end, and it sounded great. Upgrading to a music man sub x02 was a good idea. The trace and the music man go together like peas and carrots... if you're into that sort of thing. I often run a boss ds-1 through it. I get lazy and just plug up my 6-strings to it. Of course, they sound amazing. There really isnt any modeling or effects to the amp, which is standard on bass amps, but this thing is so smooth, it makes anyone sound 3 times better than they actually are.. given that they have some sort of rhythm.

After 8 years, this amp has not seen or needed any repair. I love the design of the amp,with the bold neon green and the hex head inputs. It is a bit heavy, but that just means it's sturdy, and durable. I wouldnt trade this amp for any other, to tell you the truth. Im not quite sure how much it was since I didnt buy it, but it is irreplaceable.

bawarems's review (This content has been automatically translated from French)

Trace Elliot GP7
4
This combo is type transistor, a power of 130 Watts.
It has:
- A passive input
- An active input
- 1 input line in
- 1 x line out
- An effects loop
- Making a phone
- A 7-band graphic équalizeur
- 2 dedicated volume knobs

The congiguration is instinctive, no need manual for my taste, although you will remain bent at the beast to fiddle with the knobs for several hours before finding your sound killer! For this, we équalizeur graph is a great help, you can change the sound of your bass at all any, to the roundness of a massive reggae groove to the crest of a set of funky slap ... It can be simple everything!

This amp is well suited to my style of music because that is either in the reggae, jazz, funk and metal, it allows you to express your musical creativity without limit (although I live is never exceeded 3 quarters of the total volume). I currently play with a Cort B5 and I never had any problems from the sound of the amp, you can achieve just as well one of the fattest by putting the infrabass thoroughly as powerful by pushing knobs in V. ..
My favorite sounds are the sounds a well rounded online roots and fisheries funky slap in the game.

I use this for several years and he never disappointed (just a fuse in the back that I had to replace). What I like most is his versatility, I fault this amp's weight (you catch quickly arm masson force to move it around to repeat again!). I hesitated a lot with the home BXL300 Behringer because of the price difference, but the sound has been called the strongest resistance to the price! But it's still not the amp the ^ highest first its range, if I had to redo this choice, I would do without hesitation.
Did you find this review helpful?yesno
»

jmarcz's review (This content has been automatically translated from French)

Front:
It's a combo 100 watts into 4 ohms transistors.
jack inputs high and low (sensitivity), rglaque gain knob with LED indicator Crant + saturation
pr button-shape (position = slap with mdiums creuss)
7-band EQ + switch (after the gaffe on the white plastic sliders are easily the trunk)
in and line out, effects loop and headphone
Volume (knob also Crant)
Derrire:
2 speaker outputs (4 ohms minimum load)
The heatsink of transos that takes up half the width of the amp (so it's good for the holding power of the amp)
Power switch

Part 15-inch speaker bass reflex tweeter without, HP 100w 4ohms Tiquet trace elliot in it?
all coated with a plastic sheet trsrsistante shock and with corners and grips mtalliques latrales (welcome given the weight of the machine).

There are not too widen the head. One branch, you play the pre-shape alone is a good basis for dj sounds slap but also plans for walking, playing with the tonality of the instrument.
It may well narrow recess with 7 EQ bands (50100230500 1k and 2k + 5k - 15 dB) effective trs (a recess is a breath if you push the bottom but EQ this is normal and snoring a bit if you play sitting on the combo with a passive bass too well shielded in the cavity of electronic but it's also normal)

= Trace elliot sounds ultra clean and punchy impeccable funk, jazz, reggae, rock .... just short styles. Note: there is no tweeter then slap sound is possible but it will not be sharp chattering.
Sr is for rock, blues mtal or may need to be a prvoir pramp lgre or saturation as the amplifier can saturate (by adjusting gain and volume ) but produced .... sounds like fuzz, not great with the bass (except spcial DSIR effect but there are pedals for a).

Importantly, the original HP is using trs. I gun by the con with low delay and with too much feedback for spatial effects (smoke so avoid it). replaced by a boomer who cashed Beyma PA 300W (and certainly a better sensitivity) the amp silent transform. More volume (although the silent Beyma an HP 8ohms), a more clean high volume and the possibility of another pair without cabinet down below 4 ohms mini agreed to by the amp (with a baffle Additional, for example, a 4x10 complter the 15 "no problem even with a volume of drummer who bangs).
Note 9 incorporates the new HP.

I used to 1997 2003 in RPET and concerts (bar and scne) and in 1997 he dj 3 or 4 years.
most: simple, sturdy and versatile. Sound punchy and clean any evidence.
Cons: a little heavy transport but it's OK with the grips, using HP (but one time changed by a hold out is that Bonnard). No tweeter for the slap crazy.
It was the first "big" amp I've used (yes, my first one was a rather funny 20W) and from the latter, it wasn't bad at all (except for this small history of HP).
it's serious stuff, I do not know the original price of that era (has had to turn around 7000 francs) it was good entry level stuff (trace elliot range when same). on occasion has may be worth taking into account the cost of a replacement HP (eminence delta 15 for example) or an additional speaker DIY (2x10 or 4x10 with a tweeter has done so).

see from the current 15-inch combo with ... (Ashdown, warwick? cheap but made in China, they announced 200 or 300 watts but it's not sr they sound louder than a good 100W with a good HP because HP has made much of her but also much of the price).

manuk's review (This content has been automatically translated from French)

We can not be easier
a 7-band EQ to sculpt his sound, a first hollow shape which the mdiums or nothing at all.