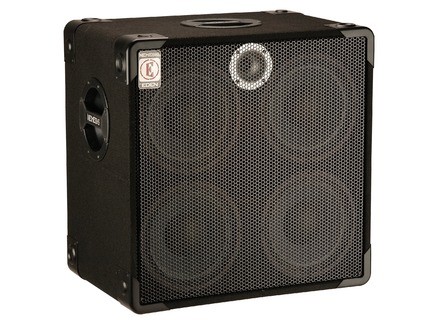 BrealK's review (This content has been automatically translated from French)

Trs-the sound is dynamic, primarily due to the fact performance! It fully respects the head as he administers without problem!

It also accepts a 5th string without problem, although it does not GNER much below a 15! "

-The tweeter is not garish at all, and works properly!

The only rel-default of this cabinet is when Exceeds 200W power ... then the HP are still very DEFINITIONS, and this in such a way that the fly as low and as the volume increases!

- I use it for the past 5 months and I am fully satisfied! I intend to add 15 "for the serious problem of loss of a large volume, which is not a be, it is even rather normal!

-I like its price, performance and respect for what he offers in amp head, making it, with the 15 ", the best quality market prices ...

- I try and Hartke Bass Mark ... Mark the bass down low but has a lower dynamic range (low performance), so is softer, and Hartke VX is simply bad bill trs .. .

-As I said, the report price is the best quality of the market in my opinion ... you have to judge!

I do it again this choice with the exprience, although hsit the Eden 4X10 "with events that he, much more expensive, but still a beautiful car!

I recommend it to all budgets srrs who want a hardware acqurir on, lightweight, strong and most effective!

-Of course there are better, such as Eden, or downright Mesa Boogie, but it is not the same price!
Did you find this review helpful?yesno
»