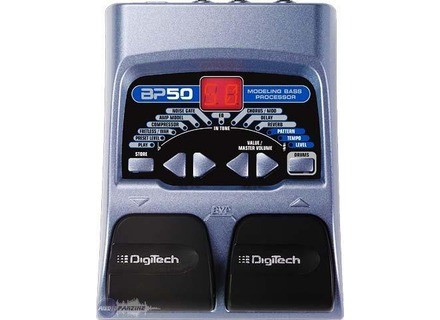 BP50, Bass Multi-Effect from DigiTech in the BP series.

DigiTech BP50
3
I will say I bought the effect peddle in edmonton, but I won't say where. The effect pedal doesn't original come with a power conection, so you don't have to run it on batteries. But the guy was nice enough to cut me a deal. (I didn't even complain about the price figure that). I paid in full roughly $130.00

I is helpful to introduce you to new and old effects out on the market. The effect in the bass there were only a few I find neat and atractive but there are others out there that I know are not practical but are still fun to mess around with. I like combining a wah effect and a delay and chorus. If you rub your hand on the string it sounds like a DJ using a record player.

The thing I don't like about it is that there no really way to stitch to other effects if needed, or switch back to normal sound of needed. That is amditory in praticing with a band or playing live

The quality of the sound is good better than getting an annoying buzz from regular magnetic effects.

The effects is good for a starter who is wanting to know what kind of effects are out there, but there are allot more for your information. In performing live it would hold it's own if switch to diffecnt effects with little effort weren't a proble. that is about it.

DigiTech BP50
5
I purchased this unit from Musician's Friend on the Web for $79.

I was somewhat hesitant to purchasing an
effects box in the first place since I got along without one for so long (20 years). However, I got tired of replacing amps and
in the past year I had been Jerry-rigging my bass and going through amps like water so I could have the right sound(s) to go along with my recent changes in playing style.

After figuring out what I really needed in an effects box and researching what was out there, I purchased the BP50. There are many things to like about the unit. Here's what I like with a few comments:

* INTUITIVE - After spending a few minutes of real "quality" time with the box, you can learn to navigate through the various effects and levels easily...I recommend you follow the instructions and don't try and hack it.
* SOUND FEATURES - The Digi folks put a
large amount of effects in such a small
package and it's going to save me a stack
on buying separate pedals. Athough there
are a LOT more effects, I've created my
own presets combining the available amp
models and compression, noise gate, chorus,
reverb, EQ, and fretless effects.
* OTHER FEATURES - The tuner is very easy
to use and the drum settings seem to cover
different musical styles. The snare sounds
like a snare, the bass drum like a bass drum, and the high hat like a high hat. You can adjust the tempo and level (volume) of the drum patterns. If the reptition of the drum patterns drives you nuts, then choose the metronome (option 31). If you are looking for different beats to enhance your practicing, this feature is great. If you are looking for something that sounds like Alex Van Halen in his prime, then buy something else.
*PRESETS - The unit offers 40 factory and 40 programmable (user) presets. You'll read some reviews that say it is difficult to navigate through the presets during live performances. However, I've been doing fine as long as I do my homework and keep them organized. I only need to use four user presets during my performances, so I'm fine as long as they are lined up one after the other. If you are a digi freak and need many to perform, then you'll run into some trouble.

I did not buy the optional expression pedal, so I have not tried out the Wah and Whammy. There is at least on factory preset with a Wah effect that's decent enough, but you can't adjust it.

I am very pleased with the unit so far. I've been running the effects through a Behringer BX1200. Take some additional time to fine tune your amp settings with any presets you create. It might sound good through your headphones, but a live bass speaker and amp settings will obviously make a difference with the sound.

Nothing really stands out as being bad about this unit, but if I worked at Digitech, here's what I would add on the next model:

* Sampler - This would enable the practicing bassist to lay down some basic root notes and then go off to work on solos or other exercises. Combined with the available drum patterns, this would be a killer feature.

* Metal housing - I hope I don't drop the unit. Maybe Digitech can make a metal cover
as an accessory item and even
include different colors and designs.

* Downloads - It would be really cool if Digi would offer downloadable custom presets created by them or users on their website. Hey, maybe they can even design the chip so other upgrades can be downloaded into the unit. Another nice feature would be a MP3/CD player that would play back music at variable speeds so the bass player can learn the more complicated lines, but I'm sure that would jack up the price pretty high.

The unit is made of a plastic that seems to have some durability, but I'll be careful with it anyway. The color is a nice blue and the interface is easy to figure out. My boys think it's some sort of spy gadget, so I guess that puts it into the "cool-looking" column.

Overall: Very good value and quality for the price. I recommend this unit for the bass player who wants some digital capabilities, pedal "consolidation," and doesn't want to spend a lot of money. There are enough bells, whistles, and practical items included in this unit to keep the average bass player carving out new sounds for a while. If you are a digi nut, spend a few more bucks and get the BP200 or something more robust.

DigiTech BP50
1
Purchased new at Guitar Center in Webster Texas as a way to play with effects processing and drum machine. I think It was $49.00 on sale.

The unit seems to be fairly well built, and has lots of effects that can be set with it.
The effects that it does produce sound pretty good. The display is nice and bright. The pedal feel is nice and solid, and switching between modes is good and noticeable.

Plenty. It drops your input volumes to your amp dramatically, the selections are difficult to make, and drum patterns are extremely limited. The users manual is downright confusing. This thing is flat out hard to use.

It seems to be put together fairly decently.

Unless you are patient with learning this unit, save your bucks. This thing stinks as far as learning how it works goes. Like I said, the sound it makes is pretty good, but you get robbed on volume, and you have to work too hard to get it to do anything useful. Perhaps the volume thing is a setting, I can't be sure...

Doppelet74's review (This content has been automatically translated from French)

DigiTech BP50
5
Distortion, mod, simulator freteless ...................... What all adapters sold separately tor in the 13?? so that it pourrc sell with six LR6 battery lasts only 15h damage the price a lot of c made in United States employs the user not very useful given the ease of use is in English go to http://www. digitech.com and ask you to download the manual for the RP-50 guitar equivalen BP-50 and it will be good acordeur INTEGRATED

J likes: design-
-Size
-The report qualitprix
I love it:-l adapter not included
10 g test other models of other brands c my favorite I refer this choice

Did you find this review helpful?yesno
»
Read the 6 user reviews on the DigiTech BP50 »