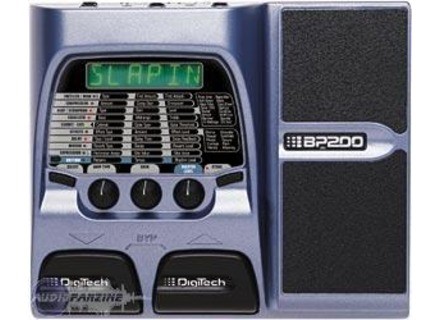 BP200, Bass Multi-Effect from DigiTech in the BP series.

DigiTech BP200
5
I bought this processor off of www.Zzounds.com for $145.99. That may seem a little pricey, but hell its worth it. I play bass and instead of buying one pedal for each effect, i bought this.

I like that this unit has over 10 different effects. It also has 16 different Cabinet models. It has Delay, and Reverb, it also has an expression pedal built in to it so you can control whammy or wah. I also like the fact the you can create you're own effects by combining them and adding different cabinet models.

It has a SOLID metal construction unlike that plastic Zoom 605 Model. This pedal will withstand almost anything.

If you are a bassist and need a few effects, don't spend hundreds on seperate pedals, buy this and you will use it very often. Another great thing about this processor is that it works well with electric guitars too.


I bought the BP200 because the captions simply said if you can buy, buy! So i did...

Very mixed feeling, I expected very expresive effects, but half are simply noise, and quite similar to "others". the amount was like 150.00 And rather it is a alright system to program your own, I think out of 100 presets I use 4, one I made.


The color is like a hangover ... the knobs work very digital, and unpredictably... You runthem anfor a few instants it ignores you and suddenly it runs... weird.

This unit does not take humuidity at all at a gig it started to funk out seriously, yes it as humid but this was the only piece that blitzed out... Zero tolerance under stress... no gigs again for it.

The apperance and building is tops... Good manual.. And good looks... PERIOD.

Look this unit is okay but not for the price. I feel like I should have bought a BOSS pedal... But gave Digitech a chance.. Maybe next time I will go to an expert... not them.

-A considarable amount of hiss can be heard when you're not playing anything, but this can easily be fixed by putting the pedal in an effects loop, or using the built in noise gate

Overall I think This Is a good buy, Much cheaper than buying separate stompboxes and effects. Check out the Digitech site to find out all of the features. If you dont really want the expression pedal I would suggest just buying the bp 50

DigiTech BP200
5
I bought this unit for $150 at my local Guiter Center store. I had been playing bass for many years, and wanted to consolidate my tuner, compresser, and noise gate together, and also wanted to try some mild effects to slightly color the sound. The type of music I play doesn't lend itself to very bizarre effects, and this unit allows me to taylor your effects to sound exactly like I want them to sound.

Has 40 factory-preset effects and 40 user banks to program your own effects. Very versatile. You can create an almost infinite variety of effects. You can copy any of the presets to any user bank to give you a starting point (Factory default is with all the user banks being identical to the factory preset banks). You can also copy any user bank to any other user bank.

The user interface is very user-friendly and fairly easy to figure out, even without reading the manual. You should read it, though because while it could be a little more detailed, it is well-written and contains a lot of good information that you may not immediately see from just playing with the unit.

The effects are good quality, and most of the factory presets are pretty good as they are without needing to modify them. Of course, this will depend on your own tastes and musical style.

At first, I was skeptical about the expression pedal and didn't think I would have any use for it. However, after playing with the unit and programming some of my own effects, I found that the pedal can be programmed for almost any single parameter of an effect, such as delay time, decay, various gains, and the effect level. This makes it very easy to adjust the effect you are using without having to switch to another bank.

Another cool feature is the built-in tuner. You just press and hold both foot pedals and you have an instant tuner that displays the notes you are playing, and also mutes the output so the audience doesn't hear you tuning.

There is little to complain about except for one thing: the hiss. If you connect it as shown in the manual with your bass plugged into the input and the output connected to your amp's input, the amount of hiss is unacceptable, even with the unit in "bypass" mode. It gave my sound man fits. I ended up plugging my bass directly into my amp and using its effects loop for the Digitech. This gave very good results, with very little noticeable hiss and better sound quality. The hiss without the effects loop was so bad that I would not recommend that anyone buy this unit unless they plan on using it with an effects loop.

Appears to be fairly rugged. Is made out of metal and plastic. No complaints here.

Even if you aren't into effects for your bass and just use the tuner, the compresser, the noise gate, and the amp modeling feature, it's definitely worth the money. You will probably need to spend time programming and tweaking your own effects to get the sound you want, but it's not at all hard to program. When you play on stage or record, just remember to use your amp's effects loop.

This review was originally published on http://www.musicgearreview.com
Did you find this review helpful?yesno
»
Read the 9 user reviews on the DigiTech BP200 »