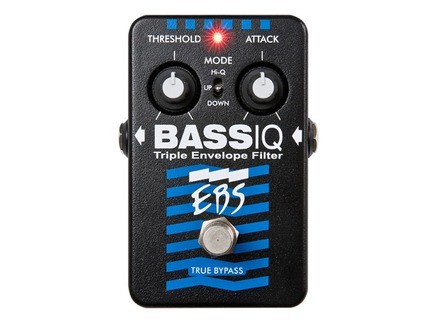 View all offers for EBS BassIQ »

EBS BassIQ
4
This is a really cool synthesizer effect pedal. It only works well with bass I think for the most part, this is kind of like an old-school analog synth pad, at least in terms of sound. There is a quarter inch input, and two outputs (use one for mono, and use the other as a dry out). This would appear to be an analog pedal but because it is Boss I'm tempted to say that it is digital. Either way it sounds analog, so just pretend it is. This cannot be edited in any way, be it computer or MIDI, and can't be racked either.

This isn't a difficult pedal to use. Don't expect to change to different synth sounds on the fly. There are four knobs. One is a resonant filter, one is a decay control, and one (Mode) controls the type of effect. There's also a knob on the left that controls the amount of affected signal mix with the dry signal. The manual will explain what everything does, but the best way to get used to using this pedal is simply to plug it in and start experimenting, looking for the sounds you want.

I use this with my P-Bass more often than not. The pre-amp of this pedal drastically alters the tone, emulating that of an analog synth. It is monophonic, but that's to be expected with the bass. I don't even know the names of most of the tones I like, if they even have names, but I'm a fan of them all for the most part. There is just enough control over the sound to make it diverse, but not enough to become overwhelming. I think that most people who need diversity in their bass tones from song to song would do well to check out this thing, it's got a ton of useful functions. I think that if you play in a hip-hop band (they exist!) you should grab this, it'll make things super funky!

I can't say there's anything I don't like about this pedal, other than the fact that I don't use it all that much (I usually don't need a synth bass). This is great for emulating Bootsy on his wilder P-Funk cuts, and stuff like that. Really cool effect, I highly recommend it. Not too expensive either, don't pay more than 170 for it.

Tibo1987's review (This content has been automatically translated from French)

Prcise configuration, there are 3 modes
HI-Q is an indescribable effect, very deep, produces a duck dmentiel absolutely! With a rhythmic slap muscle rendering is wonderful!
UP is one that goes in your Wha
DOWN coming down (logic)

Of these three modes were rglages 2: ATTACK THRESHOLD and which are respectively the speed and sensitivity of raction dclenchement effect.

The rglages are very subtle, we pass a little time to find the exact level all the notes are dclanchent just fine, but super is your exact

A small problem for me but it's not because of the pedals: I play with an active and through the pedals j'accentue yet the level of the sudden I saturate my amp which I broke lentre Active ...

I use it for three months, the ever, this is incredible power pedals.

A BMOL nanmoins, we would be able to change AIM DIFFERENT three modes at the base, but it is not prvu ...

Franck II's review (This content has been automatically translated from French)

EBS BassIQ
5
It's a good old analog effects pedals plutt compact (70 * 115 * 35) trs well finished and looks plutt solid. It can be powered by a 9V battery, phantom power if it possesses an EBS amplifier and a power adapter that is not given (30 euros).

The configurationgnrale is ultra simple. There is a two potentiomtres rgler to the level at which the effect will dclencher (treshold) and one for rgler the time to onset of effect (attack). This time limit can vary between 50ms and 2s. There is also a switch to choose between the three following filters:
Hi-Q is a kind of autowah, the scan will FITRE frquences the lowest to the highest and again
Up is the effect of a classical style MuTron envellope filter, the filter scans the frequencies of the lowest to the highest (effective opening of the filter
Down the filter will scan the frequencies of the highest to the lowest (exit effect of the filter)

I play with a Sterling and all the effects are used IMMEDIATE. The simple configuration allows you to quickly find the sound research. the apparent simplicity hides trs varied sonic possibilities. Can be obtained thanks to the filter Hi-Q sound of classic auto-wah sounds, but also much more funky and complex.
Up Filter allows you to find the sound of Bootsy Collins and himself as a king of funk and slap in 5 min. Down the filter is the least empty manage because it has a significant impact on the dynamics of your sound FITRE the closing and reducing the volume quickly if one dose not attack well but proves to be trs original interresssant once masters.
Sound clips are available on the BSE but does not realize I find more things, but allow any time to get an ide. <ul>

I use it for a month and following conquered by its simplicity and efficiency. Common to all the filter envelope, the effect is trs "alive", it is your trsdpendant fawn playing. We must therefore learn to control it and this is done, you will have gold in your fingers.
I tried also the range in Q-Tron Electro-Harmonix also trs that sounds good. But I think that is imple BASSIQ job thanks rglages its limits without losing cele "versatility." I think it also causes less problems of dynamics, the volume substantially the same as when the effect is activated or not. It is also less bulky
The report quality price seems trs correct and I would do without any concern that choice.

View all 6 videos of EBS BassIQ »

EBS BassIQ manuals and other files